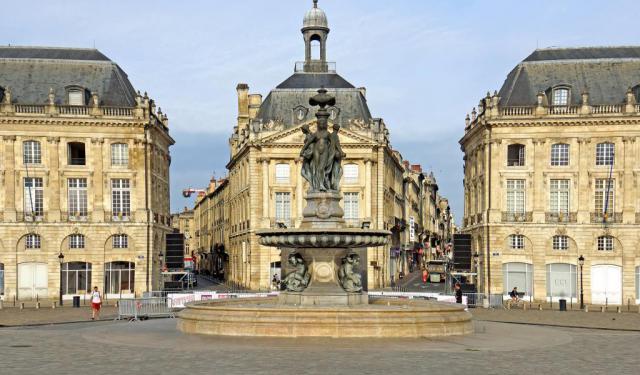 Calais is a city of rich history and remarkable monuments. It offers tourists its diverse and beautiful sites, historic heritage and well preserved memorials. Along with its famous Colonne Louis XVIII and Quartier du Courgain Maritime, the following tour plan will guide you through Calais' most significant attractions.
Image Courtesy of Flickr and Dennis Jarvis.
How it works: Download the app "GPSmyCity: Walks in 1K+ Cities" from iTunes App Store or Google Play to your mobile phone or tablet. The app turns your mobile device into a personal tour guide and its built-in GPS navigation functions guide you from one tour stop to next. The app works offline, so no data plan is needed when traveling abroad.

The first monument was erected in 1791, dedicated to the sacrifice of Gavet and Mareschal, victims who were drowned while rescuing an equipage of a fishing ship near the harbour entrance. the memorial disappeared during the demolition of the wall against which it was standing. A new memorial in bronze was sculpted by Edward Lormier, inaugurated in 1899 on the Boulevard of the Allies, and was transferred in 1960 to the district of Courgain. Every year a ceremony is held here to honour the memory of all lost at sea.
Image Courtesy of Flickr and Jean Louis(JL62).
2

Founded around the 19th century, a small village formed from a natural harbour at the outlet of the river of Guines, the Courgain, gathered few families of fishermen. Subjected to storms, the area survived, protected only by fences. Despite the improvements effectuated under the Second Empire, the streets remained narrow and unhealthy. Rebuilt after the devastation caused by bombing in 1940, the Courgain underwent a radical transformation. On the edge of the basin of Paradise, a statue of L. Buisseret reproduces the symbol of the Courguinoise.
Image Courtesy of Wikimedia and Ottaviani Serge.
3

After the fall of the Empire, Louis XVIII, at the request of a municipal delegation to return to France via Calais, accepted as "it was the shortest route and he was eager to see his loved ones". The monument, erected with his agreeement in memory of the landing of April 24, 1814, includes a bronze plaque of the royal footprint and a commemorative text. Declared an historic monument in 1933, the column was removed in 1939 in order not to interfere with the work of the port, and thus escaped destruction. Made of stone blocks, it finally remained in its former position on the dock to be erected in front of Courgain Maritime in 1965.
Image Courtesy of Wikimedia and Ottaviani Serge.
4

Located in the Marine Courgain, the Bassin du Paradis is the oldest remaining part of the Medieval port and it reflects the activity of sea fishing. Its name comes from a family, "Paradises", who lived in Calais during the English occupation of the city. The Bassin du Paradis houses up to 100 fishing boats and sailboats and brought together families of fishermen from the neighbourhood where people spoke a rude language since the ninth century.
Image Courtesy of Wikimedia and Ottaviani Serge.
5

Place d'Armes is one of the largest squares in Calais that also adjoins the 13th-century watchtower - Tour de Guet. During the British occupation, it took the name of Market Square but at the end of the occupation, the name Place d'Armes definitely stuck. What once must have been a building with a noble purpose, now turned into a beautiful open air market every Wednesday and Saturday. The inner square is also full of interesting cafés and specialty shops.
Image Courtesy of Wikimedia and Romainberth.
6

Built in 1862 and redesigned in 1956, Parc Richelieu is the first public park in Calais. This is due to General Berthois who planted many trees on the fortification of the east of the city. During this period Berthois disappeared in the middle of the great works of the years 1880-1890. In 1859, Charles decided to develop this space and plant more, while taking into account the existing trees. Untill now, Calais has undergone several improvements: installation of gates and railings, some statues, construction of a bandstand and a new monument to the dead has been erected, very different from the previous one.
Image Courtesy of Wikimedia and Stefi123.
7

Outside the Richelieu Gardens stands a monument that is dedicated to the Calais people killed in colonial expeditions. Inaugurated in 1904, the frontage of the memorial represents a statue of a female figure holding a bronze sword embodying Valour - protect homes, and on the top of it you see Glory crowning Capt. Louis Dutertre representing Humanity and Duty. The base is decorated with Art Nouveau elements on both sides.
Image Courtesy of Wikimedia and Bodoklecksel.
8

From 1856, land situated on the boundary of the town of Saint-Pierre-les-Calais and along the street of the Hospice, is transformed into a public promenade. In 1863, the council decided to erect a monumental fountain to celebrate the arrival of the waters of Guines to Calais. The basin is designed after a bowl that decorated the gardens of Versailles. The central group weighs four and a half tons. The children at the foot of the fountain have been inspired by Edme Bouchardon and the Three Graces by Germain Pilon. At the end of the '80s, the city decided to restore the fountain and bright lights, and new fountains were installed.
Image Courtesy of Flickr and Daniel Means.
9

Situated on the Place Albert I, the Jacquard statue commemorates Joseph Marie Jacquard, whose invention has contributed to the development of the lace, which in those times made Calais rich and famous. The monument was sculpted by Marius Roussel and was inaugurated in 1910; it was realized as a result of a public subscription, to which Henri Henon devotes a benefit of the publication of his book: "History of the mechanism of the tulle and lace industry in Calais". The statue, sent to the cast in 1942, was replaced in 1954.
Image Courtesy of Wikimedia and Bodoklecksel.