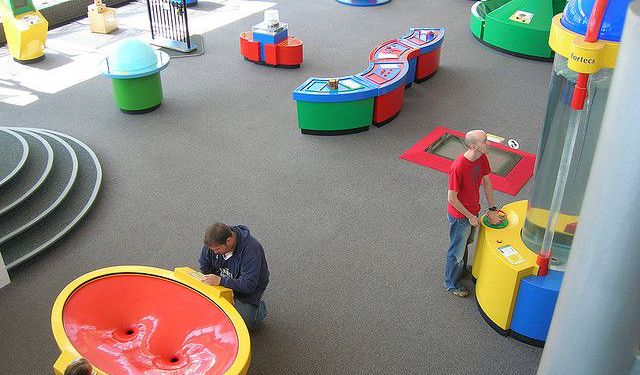 Cardiff is a vibrant city and a popular tourist destination with lots of interesting places for children and their parents see and visit. Take this self-guided walking tour to discover the best family fun attractions Cardiff can offer such as fascinating Techniquest science museum and workshop, Hollywood Bowl games entertainment, Wharf water-front picnic pub and many more.
How it works: Download the app "GPSmyCity: Walks in 1K+ Cities" from iTunes App Store or Google Play to your mobile phone or tablet. The app turns your mobile device into a personal tour guide and its built-in GPS navigation functions guide you from one tour stop to next. The app works offline, so no data plan is needed when traveling abroad.

Image by Seth Whales on Wikimedia under Creative Commons License.
2

Hollywood Bowl bowling club is a popular recreational venue that offers an exciting family fun experience. Lightweight balls, ramps and bumpers are available here for small kids. Check out the club’s café to buy a tasty meal, cakes and milkshakes and gamers area packed with games for all ages.
Image by ginnerobot on Flickr under Creative Commons License.
3

If your kid is drawing spacecrafts and super heroes then you know he or she will love Forbidden Planet. It is a fantastic shop one can browse for hours. It sells huge collections of Science Fiction and Fantasy comics and books, DVDs, action man figures and other Sci Fi themed memorabilia. Decorations such as Star Wars human size characters’ statues give the shop an authentic tone and an exhibition-like atmosphere.

Image by shining.darkness on Flickr under Creative Commons License.
4

Image by Million Moments on Wikimedia under Creative Commons License.
Sight description based on wikipedia
5

Bute Park in Cardiff, Wales, is an extensive area of mature parkland easily accessible from the city center. Flanked by the River Taff, Sophia Gardens, Pontcanna Fields and Cardiff Castle, Bute Park is a very popular 'green lung' full of historic and wildlife interest. Few cities have such a spacious green area in the heart of their city. The Taff Trail can be accessed at the northern end of Blackweir Fields. A water bus stop is located adjacent to Canton Bridge at the southern end of the park offering trips to Cardiff Bay, Penarth and the barrage.
Image by Athena's Pix on Wikimedia under Creative Commons License.