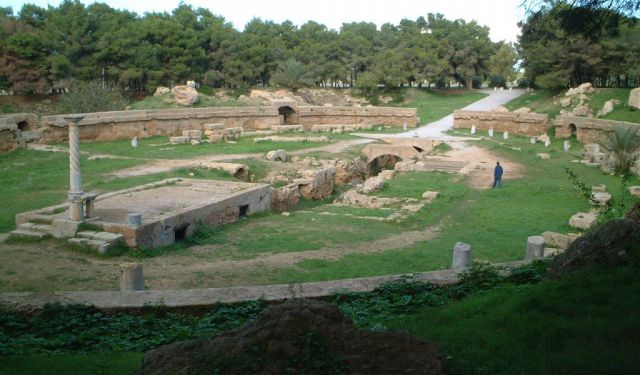 Image by Neil Rickards on Wikimedia under Creative Commons License.

Carthage is an ancient place of archaeological and architectural value. Its unique architecture tells about the rich history and wealth of this great strategic site for different empires such as the Phoenicians, the Punics and the Romans. Check out these interesting places in the next walking tour!
How it works: Download the app "GPSmyCity: Walks in 1K+ Cities" from iTunes App Store or Google Play to your mobile phone or tablet. The app turns your mobile device into a personal tour guide and its built-in GPS navigation functions guide you from one tour stop to next. The app works offline, so no data plan is needed when traveling abroad.

Dedicated to marine life, the Oceanographic Museum exhibits various examples of fish from the Mediterranean Sea. In addition to the saltwater aquarium, it contains a collection of seashells, Tunisian birds and fishing boats. This small museum is situated between the two ports in Carthage.
Image by Shoestring on Wikimedia under Creative Commons License.
2

Light Bar is a trendy spot located in Hôtel Villa Didon. It has a fashionable modernist design, which attracts a lot of visitors. The posh and trendy clientèle also come to enjoy a wonderful panoramic view of Tunis Bay. On Thursday, Friday and Saturday nights it plays lounge music.
Image by Valdemar_D on Flickr under Creative Commons License.
3

The museum received its present name in 1956 and opened for the first time as a national museum in 1963. It has undergone extensive restructuring in the 1990s, and has now been redesigned to accommodate new discoveries on the site of Carthage, especially the product of searches conducted as part of the international campaign of the UNESCO, from 1972-1995.

Tip:
The ticket you buy here gets you into all the historic sites in the Carthage area: the Roman Theater, the baths, villas, etc.
Consider hiring a guide to bring you around and explain the history of Tunisia and the story behind the ancient ruins.
Early or late evening is the best time to visit as there are many tour buses in the middle of the day.


Image by nonanet on Wikimedia under Creative Commons License.
4

Parc des Villas Romaines, or Park of the Roman Villas, is located in Carthage adjacent to the ancient Roman Amphitheater. This place is a former Punic cemetery. Villa des Volières, which dates to the 3rd century, has been renovated. At the restored Roman villa you will see a small antiquarium, pavements of fine mosaics and a terrace with several fragments of sculpture.
Image by Pradigue on Wikimedia under Creative Commons License.
5

Mosquée El Abidine was erected on a place called "The Hill of the Odeon” in the heart of the archaeological site of Carthage. Opened in 2003, the building includes a prayer hall, a patio and a minaret nine feet high. This is the first mosque erected in Carthage since Islam appeared in Tunisia.
Image by Asram on Wikimedia under Creative Commons License.
6

The North Africa American Cemetery and Memorial is a Second World War military war grave cemetery, located in the town of Carthage in Tunisia. The cemetery, the only American one in North Africa and dedicated in 1960, contains 2,841 American war dead and covers 27 acres (11 ha). It is administered by the American Battle Monuments Commission.

Headstones are set in straight lines subdivided into nine rectangular plots by wide paths, with decorative pools at their intersections. Along the southeast edge of the burial area, bordering the tree-lined terrace leading to the memorial is the Wall of the Missing. On this wall, 3,724 names are engraved. Rosettes mark the names of those since recovered and identified.

The chapel and the memorial court, which contains large maps in mosaic and ceramic depicting the operations and supply activities of American forces across Africa to the Persian Gulf, were designed to harmonize with local architecture. The chapel interior is decorated with polished marble, flags, and sculpture.

Why You Should Visit:
The grounds are impeccable; the administrative team will be happy to give you a tour, tell you the story of the fallen and the missing and give you some insights into the North Africa campaign.

Tip:
Be sure to enter the administrative offices as one of Tunisia's most remarkable mosaics is on display.