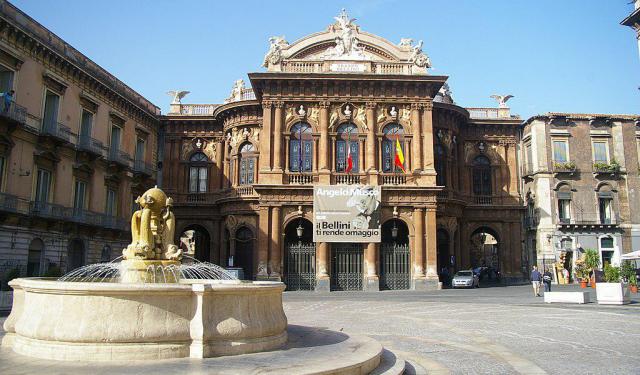 Catania is famous for its splendid Baroque and Rococo architecture. The city's building material consisted mainly of gray lava stone. There are many magnificent palaces, churches and theaters. There are ancient Roman ruins that still exemplify the beautiful architecture of the past. Take this self-guided to explore the architectural sights of Catania.
How it works: Download the app "GPSmyCity: Walks in 1K+ Cities" from iTunes App Store or Google Play to your mobile phone or tablet. The app turns your mobile device into a personal tour guide and its built-in GPS navigation functions guide you from one tour stop to next. The app works offline, so no data plan is needed when traveling abroad.

Villa Cerami is an artistically baroque palace and a historical building in Catania. It was built several years after the devastating earthquake of 1693. Today it is the seat of the Faculty of Law of the University of Catania. It rises at the end of Crociferi street. One of the remarkable features of its architecture is the adorned portal that is the entry to a large courtyard of the villa. You will see there the monumental staircase decorated with a fountain. It is the remarkable work of Vaccarini, famous architect of this beautiful city.
Image by Cicciofarmaco | Photography on Flickr under Creative Commons License.
2

Church of Saint Camillo was built in the 18th century. This church represents the Baroque architecture so common on Via Crociferi. There are some added elements of neoclassical style. You will see a staircase that leads directly to the church vestibule and then to an oval hall. The altars inside the church are adorned. The parapet wall is decorated with eighteenth century paintings and a delicate floral decoration. The building of the church is characterized by the elegant simplicity of its architecture and the decorative Baroque style.
Image by Joe Mabel on Wikimedia under Creative Commons License.
3

The Odeon of Catania is one of the most significant monuments of ancient Catania. The Odeon exemplifies ancient Roman architecture in Catania. It was built as a semicircular construction that could accommodate 1500 spectators. This Odeon is similar to those funded in other Greek and Roman cities. The building material was mainly lava rock, but also bricks and marble. The orchestra - semicircular space between the auditorium and the stage, was and still is paved with marble. Some of the rooms in Odeon were restored in the sixties, but their function remains unclear until today.
Image by Archeo on Wikimedia under Creative Commons License.
4

4) Roman Theater of Catania (must see)

Roman Theater of Catania is situated next to Odeon and is another example of ancient Roman architecture in Catania. It dates back to 300 B.C. It was built mainly from black lava stones and other materials that make it look like polychrome. Here you can see what is left from the original Theater. Roman buildings of the old Roman city became the foundations for other buildings of the city and today you can see Baroque palaces built upon part of the theater.
Image by Louisvhn on Wikimedia under Creative Commons License.
5

City Hall or Municipio is located now in what was Palazzo degli Elefanti. This palace was built in 1696, after the terrible earthquake. There are several balconies, and from one of them Mussolini spoke to people. There is a main courtyard and a second courtyard at the palace that is worth seeing. The building has facades from each of its parts. There is a grand staircase that leads to the main courtyard and 4 porticoes that were built much later at the end of the 18th century.
Image by Augulino Giovanni on Wikimedia under Creative Commons License.
6

Palazzo San Giuliano was built in 1738, thus exemplifying the architecture that emerged following the earthquake that devastated Catania. There are several plaques at the entrance that recall the famous guests that have stayed here. Among them were the king of Italy, Vittorio Emanuele III and Queen Elena. The building has been remodeled several times but the external elevations have remained almost the same; only the balustrade that crowns the roof are of another style. The palace was built with various colours of marble and the door is flanked by two marble columns that are found in some buildings from Roman times.
Image by Fatuzzino on Wikimedia under Creative Commons License.
7

The Teatro Massimo Bellini is an opera house in Catania. Named after the local-born composer Vincenzo Bellini, it was inaugurated on 31 May 1890 with a performance of the composer's masterwork, Norma. Throughout its history, the opera house has performed almost all of Bellini’s work. In recent years, there has been an infusion of about $2 million, leading to the celebration of the Bellini bicentennial during the 2001 season and to a major renovation of the house.The creation of what was to finally become the Teatro Massimo Bellini took almost two hundred years, beginning with discussions following the disastrous 1693 earthquake which completely destroyed Catania. The construction of a public theatre was discussed, and a foundation stone was finally laid in 1812.

Architect Salvatore Zahra Buda began to prepare a plan for a theatre in the Piazza Nuovaluce, in front of the Santa Maria di Nuovaluce monastery, the location of the present-day theatre. The exterior of the house matches the distinctive Sicilian Baroque style of the neighboring buildings of the late 17th Century. Its marble foyer, the “Ridotto”, is ornate and stuccoed, and a statue of Bellini is located between the central arches. The beautiful red-plush interior includes the main floor seating and four tiers of boxes. The painted ceiling of the theatre is quite spectacular in its depiction of scenes from four of Bellini’s most well-known operas.

Image by Crazychemist1 on Wikimedia under Creative Commons License.
Sight description based on wikipedia
8

Convitto Cutelli is considered a jewel of eighteenth-century architecture of Catania. It exemplifies the specific architecture that appeared in this city after the devastating earthquake in the 17th century. The main façade of the building was built in neoclassical style. There is a circular courtyard, a big clock tower and a monumental marble staircase that leads to the halls. The grandeur architecture of this building reflects the harmony between forms and design.
Image by catania 68 on Flickr under Creative Commons License.