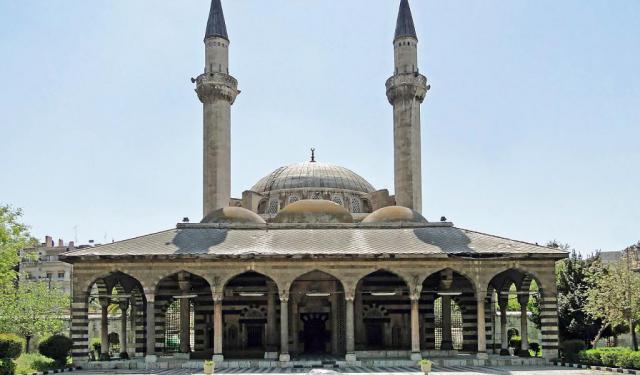 Being one of the oldest continually inhabited cities in the world, Damascus has a lot of places to explore. In its center you will find fascinating museums, ancient holy places, a public park and many other amazing attractions. The following tour will help you discover the central part of Damascus.
How it works: Download the app "GPSmyCity: Walks in 1K+ Cities" from iTunes App Store or Google Play to your mobile phone or tablet. The app turns your mobile device into a personal tour guide and its built-in GPS navigation functions guide you from one tour stop to next. The app works offline, so no data plan is needed when traveling abroad.

Al Minshieh Park, a wonderful public park, is a spacious green area with benches, beautiful trees and striking local plants. On warm summer days it attracts a lot of tourists and locals.
Image by Taras Kalapun on Flickr under Creative Commons License.
2

2) National Museum of Damascus (must see)

It also contains many exhibits made of glass and metal, as well as coins, from different periods of Islamic History. There are also scriptures from the Ummayad era to the Ottomans.

Image by upyernoz on Flickr under Creative Commons License.
Sight description based on wikipedia
3

Sultan Sulayman Mosque is one of the most impressive religious buildings in Damascus. Dating back to 16th century, it was constructed by the Ottoman Sultan, Sulayman I. Later, an additional mosque was added by Selim II. At this holy complex you will also find the tomb of Sultan Vahidettin, the last Sultan of the Ottoman Empire.
Image by Bernard Gagnon on Wikimedia under Creative Commons License.
4

The main purpose of the railway was to establish a connection between Constantinople, the capital of the Ottoman Empire and the seat of the Islamic Caliphate, and Hejaz in Arabia, the site of the holiest shrines of Islam and the holy city of Mecca, the destination of the Hajj annual pilgrimage. Another important reason was to improve the economic and political integration of the distant Arabian provinces into the Ottoman state, and to facilitate the transportation of military forces. The railway is remarkable both for having had no debt when completed and for having many miles of track below sea level.

Image by Heretiq on Wikimedia under Creative Commons License.
Sight description based on wikipedia
5

The Yalbugha Mosque, built in 1264, was a Mamluk construction located along the Barada River, overlooking Marjeh Square. It was one of the most famous, influential and beautiful mosques in Damascus, and served as a resting point of the Hajj caravan. It took its name from Yalbugha, the governor of Damascus, who restored it in 1443. The ancient mosque was demolished in 1975 and replaced by a larger one bearing the same name. The new mosque remains unfinished due to its uneven settlement.
Image by krebsmaus07 on Flickr under Creative Commons License.
Sight description based on wikipedia
7

Sanjaq Daar Mosque, located near the Damascus Citadel, is another ancient religious building. It is a precious landmark of great historical and cultural value. With its attractive minaret and dome, it is a fine example of marvelous Syrian architecture.
Image by alazaat on Flickr under Creative Commons License.