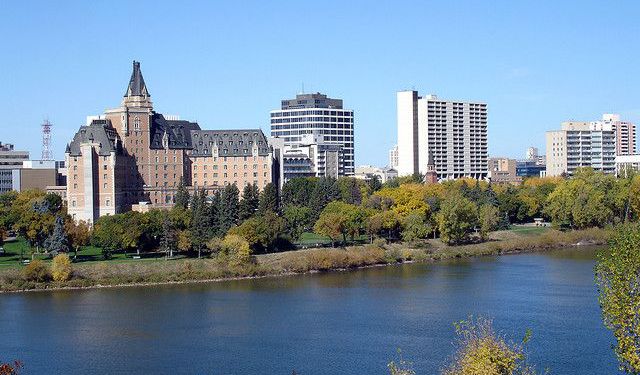 Image by daryl_mitchell on Flickr under Creative Commons License.

The Central District of Saskatoon is one of the busiest areas in town because there are many interesting attractions, beautiful sights and amazing architectural buildings. Take this tour to explore the most remarkable downtown attractions of Saskatoon.
How it works: Download the app "GPSmyCity: Walks in 1K+ Cities" from iTunes App Store or Google Play to your mobile phone or tablet. The app turns your mobile device into a personal tour guide and its built-in GPS navigation functions guide you from one tour stop to next. The app works offline, so no data plan is needed when traveling abroad.

The Barrister House was established in 1909 and is a protected building in Saskatoon. In its construction, some materials from the demolished old building of the Saskatoon Club were used, such as columns from the old verandah. The Barrister House was restored in 1987 and is considered a national landmark and heritage structure located on 6th Avenue North.
Image by Julia Adamson on Wikimedia under Creative Commons License.
2

The Star-Phoenix Clock is located at the intersection of 5th Avenue and 24th Street. It is a protected heritage property established by W. Herman in memory of T. Lawson. Seth Thomas was the first who succeeded in designing and making tower clocks in different countries. The Star-Phoenix Clock was erected in 1920 and is also the name of the daily newspaper of Saskatoon.
Image by Scott Woods-Fehr on Flickr under Creative Commons License.
3

The Rumely Building is a heritage building located at 244-226 Pacific Avenue in the Central Business District of Saskatoon. Formerly serving as a warehouse for the Rumely Company Company, the building has been converted into residential condominium lofts with commercial units located on the ground floor.

The M. Rumely Company (a manufacture of heavy farm equipment) in April 1912 started work on the construction of a new showroom/office/warehouse building on a railway spur line in the downtown area of Saskatoon. The 12 by 25 foot elevator and nine inch thick floor permited heavy equipment to be stored on the upper floors.

Image by Julia Adamson on Wikimedia under Creative Commons License.
Sight description based on wikipedia
4

The Kempthorne Building was established in 1910. The construction is mostly made of maroon brickstone, very remarkable in cityscape. Initially the top floors were used as apartments but later were transformed into offices; they are now closed. Since 1985 the building belongs to Moores, who made possible the renovation of the interior and the exterior of the building. The Kompthorne Building retained much of its previous design.
Image by joo0ey on Flickr under Creative Commons License.
5

The Hotel Senator is a landmark building located in downtown Saskatoon. The building was built as the Flanagan Hotel by James Flanagan, an early settler in Saskatoon and designed by Walter William LaChance, an architect who designed many local Saskatoon buildings at the turn of the century. When originally built, the hotel included many luxury features for 1907, including steam heating, hot and cold running water, telephones in each room and extensive use of marble and wood paneling. James Flanagan died in 1909; the hotel was subsequently sold in 1910. Today the property is designated a protected building. It houses a european-style boutique hotel with 38 rooms.
Image by Drm310 on Wikimedia under Creative Commons License.
Sight description based on wikipedia
6

The Galaxy Theatre got its name from its exterior design, as a painted representation of the galaxy can be seen on its large façade. It is one of the most visited cinema theatres in Saskatoon, especially given its downtown location, which is a very populated zone. Visitors can watch all kinds of movies like comedy, family comedies, the newest 3D movies, etc. There is street parking.
Image by Julia Adamson on Wikimedia under Creative Commons License.
7

La Renaissance Apartments is a tower block located near the Radisson Hotel on Spadina Crescent East. Established in 1983, it is the main skyscraper in Saskatoon and one of the tallest buildings in the city. The structure includes 24 floors and represents modern architectural style. The fact that it is located near the river makes for a beautiful view from the top floors of the building. Right in front of the buildings is St. Andrew's Presbyterian Church, built out of red brick in 1953. Nice and clean, this little church has some Neo-Gothic elements.
Image by Drm310 on Wikimedia under Creative Commons License.
8

River Landing is an ongoing redevelopment district in Saskatoon that will create a commercial/cultural development along the bank of the South Saskatchewan River in downtown Saskatoon.

River Landing is divided into two phases. The first phase concentrates on the eastern region of river landing and includes redeveloping the waterfront, a hotel complex and a destination complex. The second phase concentrates on the western region including the cleanup of the old A. L Cole site, park land and the conversion of a pre-existing electrical service building into a year round home for the farmer’s market, business centre and residential development.

Plans for redevelopment of the riverbank have come and gone since the 1970s. One of the first steps towards redeveloping the area was the demolishing of the old Saskatoon Arena in the early 1980s; at one point there were plans to build a new hockey rink and convention centre on the site, but ultimately it was decided to build Saskatchewan Place (now Credit Union Centre) on the city's outskirts. In 1989, the Arena site became an outdoor entertainment venue in conjunction with that year's Canada Summer Games, and proved popular enough that there was talk of the site becoming a permanent outdoor venue. Around this time, the city unveiled plans for a market and hotel on the site as part of its South Downtown Redevelopment scheme which also involved redeveloping several adjacent blocks to the north.

Image by daryl_mitchell on Flickr under Creative Commons License.
Sight description based on wikipedia