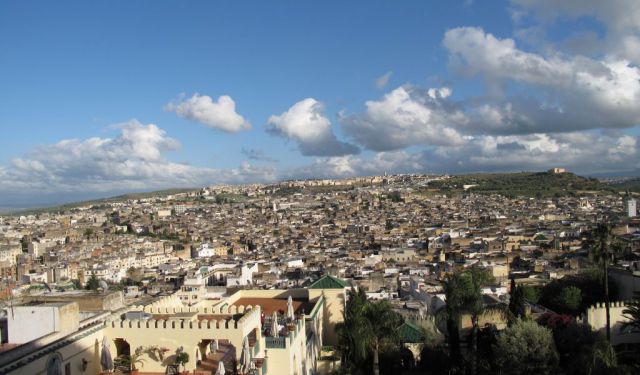 Image by Zimaal on Wikimedia under Creative Commons License.

Fes is a charming city, prominent tourist destination, as well as a fascinating place to search and discover. The central district of Fes features important boulevards, fine squares, and beautiful gardens. Explore the central region of Fes today.
How it works: Download the app "GPSmyCity: Walks in 1K+ Cities" from iTunes App Store or Google Play to your mobile phone or tablet. The app turns your mobile device into a personal tour guide and its built-in GPS navigation functions guide you from one tour stop to next. The app works offline, so no data plan is needed when traveling abroad.

The Agdal Gardens (or Aguedal Gardens) are gardens, of about 400 hectares (4.0 km2; 1.5 sq mi) of surface, to the south of Dar El Makhzen, the Royal Palace, and the medina in Marrakech. Their name derives from the Berber language for "walled meadow". Extending for some 3 kilometres (1.9 mi), the gardens include groves of orange, lemon, fig, apricot and pomegranate trees in rectangular plots, linked by olive-lined walkways. Together with the medina of Marrakech and the Menara Gardens, the Agdal Gardens were listed by UNESCO as a World Heritage Site in 1985.

The gardens were created as an orchard by Abd al-Mu'min of the Almohad dynasty in the 12th century.

They were renovated by the Saadi dynasty and then enlarged during the reign of Moulay Abderrahmane in the 19th century, when they were enclosed with pisé walls. The gardens are irrigated using a number of pools and ditches. A network of underground channels and ditches, known as khettera, bring water down from the High Atlas mountains many kilometres away, via Aghmat in the Ourika Valley to the south.

The Dar El Hana, a small pavilion or minzah, stands beside the largest pool, the Sahraj el-Hana (Tank of Health), which was used to train troops to swim. Sultan Mohammed IV died in the pool when his steam launch capsized there in 1873. His successor, Sultan Moulay Hassan, housed his harem in another pavilion in the gardens, the Dar al Baida.

Image by zongo69 on Flickr under Creative Commons License.
Sight description based on wikipedia
2

Garden Almouhdiin is situated just across the street from the southern section of Agdal Garden. Garden Almouhdiin is another beautiful garden in the great city of Fes. Here you will admire Moroccan tall palms and other wonderful local plants.
Image by Felix Burton on Wikimedia under Creative Commons License.
3

Place des Alauites, or Alauites Square, is situated in the central section of the city, near the magnificent Royal Palace, Garden Almouhdiin, and Jewish Cemetery. Place des Alauites is a spacious square, surrounded by numerous exotic palms.
Image by amerune on Flickr under Creative Commons License.
4

Boulevard Boukhsissat is one of the most important streets in Fes. The street stretches from the Place des Alauites to the intersection of Avenue du Batha and Avenue de La Liberte. Boulevard Boukhsissat is a very prominent city boulevard as it's home to numerous picturesque buildings that date back from the period of the French Protectorate.
Image by El Pantera on Wikimedia under Creative Commons License.
5

Rue Sekkakine is located in the "Fez’s Jewish Quarter." Rue Sekkakine is a fine street, one where you will enjoy numerous shopping options. The stores tend to specialize in gold and silver, as the quest for gold was born on this street by the city's Jewish community in the 14th century.
Image by Jayanth Vincent on Flickr under Creative Commons License.
6

Dating from the 17th century, the Aben Danan Synagogue would have disappeared if it had not been renovated in the year 1999, after it threatened to collapse. It is the symbol of Moroccan Judaism, which has become a universal monument named a World Heritage Site by UNESCO. Now it is not only a place of worship but also a museum.

The synagogue was built by Mimoun Ben Sidan, a wealthy merchant from the town of Ait Ishaq. It was once only one of several inside the walls of Fes, and not the most elaborate. It is entered through a simple doorway indistinguishable from the doors of nearby houses. The door leads immediately to a short flight of stairs that lead into the high, rectangular space of the synagogue. It was intended as a seating area for the congregation's more distinguished members. The bimah is accessed from this space, constructed as a small platform cantilevered out form the raised area. The wooden bimah is topped by a wrought iron canopy of Islamic-style arches and floral forms, culminating in a crown.

Why You Should Visit:
Beautiful piece of history with a very old and rare Torah – a good way to see the mixture of religions in Fes.

Tip:
Don't miss the rooftop panorama over the valley and Jewish cemetery! There's also a nice 'mikvah' (Jewish ritual bath) downstairs.
If you don't know anything about synagogues or Jews, come with a guide. If you are not interested in Jewish history or religion, skip it.

Jewish Cemetery, located on the edge of the Jewish District (Fundunk al Yahudi or Melah), was founded by Morocco’s Jews. The cemetery has two entrances. Upon entry through the main entrance, tourists will note a mourner’s bench, a fountain, as well as an open chapel. At the Melah entrance, visitors will discover a school which now houses a museum.
Image by protographer23 on Flickr under Creative Commons License.
8

Fondouk Americain is an old, prominent city building. Founded in 1927, this white institution served as an animal hospital. The Fondouk Americain was established by Amy Bend Bishop, an American tourist who is well-known here for his generosity, kindness, and generosity.
Image by mrzorglob on Flickr under Creative Commons License.

Fes is Morocco’s former capital as well as one of the most important cultural centers in the entire country. Dating back to the late 8th century, this charming city features several fine art galleries, fascinating museums, informative libraries, and other cultural venues.