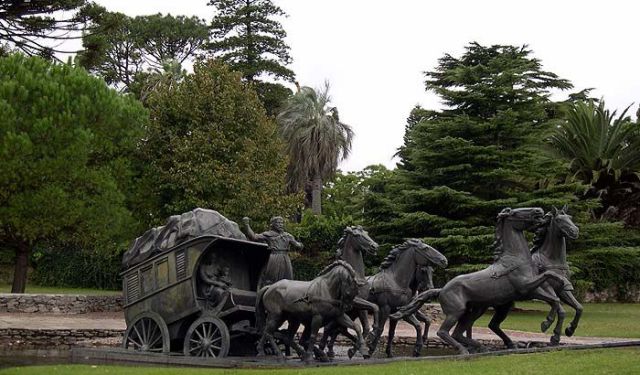 The central part of the city of Montevideo is characterized as having many interesting places to visit. It represents a cultural mix of places that exhibit the beauty, the culture and the history of the city's formation. There can be visited, museums, monuments of known people, zoo and football stadium. Take this tour to discover the beauty of the center of Montevideo, Uruguay.
How it works: Download the app "GPSmyCity: Walks in 1K+ Cities" from iTunes App Store or Google Play to your mobile phone or tablet. The app turns your mobile device into a personal tour guide and its built-in GPS navigation functions guide you from one tour stop to next. The app works offline, so no data plan is needed when traveling abroad.

Plaza de la Bandera, also known as Plaza de la Democracia, is a square that contains an important monument and a flag that symbolizes the spirit of Orientalism. The flag was enshrined in the Constitution of the Oriental Republic of Uruguay. It is the only monument dedicated to a flag of the world.
Image by Geronimo_ on Flickr under Creative Commons License.
2

Monumento a Juan Pablo II was established by the archbishop of Montevideo, Nicolas Cotugno. It was opened in 1987 in the place where the Pope held his first Mass in Uruguay. It was located in a busy intersection in Uruguay, 100 meters from another important monument, the Obelisk.
Image by Jordevi on Wikimedia under Creative Commons License.
3

Six years later, a similar but larger monument was built at the intersection of 9 de Julio and Corrientes avenues in Buenos Aires, to celebrate the 400th anniversary of the first founding of the city.

Image by Tano4595 on Wikimedia under Creative Commons License.
Sight description based on wikipedia
4

The park contains the 70,000 seat Estadio Centenario, built for the first soccer world cup in 1930, which is both the national football stadium and it contains a football museum. There is also the Tabaré Athletic Club which is occasionally made over as a carnival theatre using impermanent materials. The Municipal Velodrome, two smaller stadiums (the Parque Palermo and the Parque Luis Méndez Piana), and a target shooting facility are additional attractions. In 1934, "La Carreta", a bronze monument on granite base by José Belloni was introduced. The monument, one of several statues in the park, is located on Avenida Lorenzo Merola near Estadio Centenario and depicts yoked oxen pulling a loaded wagon. It was designated a national monument in 1976. Another statue in the same side of the park is a bronze copy of the Discobolus of Myron.

Image by Tano4595 on Wikimedia under Creative Commons License.
Sight description based on wikipedia
5

Monumento a la Carreta was inaugurated on October 14, 1934. The sculptor that made this monument is Jose Belloni. It became a national monument in 1976. It is made from bronze and granite. It is located in the Parque Jose Battle. It recalls the classical mode of cargo transportation.
Image by Eduardo Ruggieri on Wikimedia under Creative Commons License.
6

The Uruguayan national team has always been a threat when playing in their home stadium, consistently beating top teams. Even the top ranked Brazil national football team has only managed 3 wins in 20 opportunities, although only one was an official match.Aside from the Uruguayan national team, any football club can rent the stadium for its home games. Peñarol has done that for nearly every game in the past years, while Nacional rents it for some international games. In the case of other Uruguayan teams, they often decide to play there against both Peñarol and Nacional. The stadium was built as the main host stadium for the 1930 World Cup. Estadio Centenario hosted every team in the competition in 10 matches, including both semi-finals and the final. Below is the list of the matches played at Centenario during the 1930 World Cup.
Image by jikatu on Flickr under Creative Commons License.
Sight description based on wikipedia
7

Museo del Fútbol is located in the interior of the Centario Stadium. It contains all the medals, cups and other important premiums from the football competitions. Here you can also find the World Cup won in 1930. It is dedicated to the soccer country’s heritage that made them famous throughout the entire world.

Zoológico Municipal de Villa Dolores has a population of 550 animals and 650 trees. There are animals collected from all continents that live on 7 hectares of land. Now the locations for animals are more modern and comfortable, and people can see them from up close, feed them and touch some of them. The architect of the zoo is Mr. Mayor Mariano Arana.
Image by alarch on Flickr under Creative Commons License.