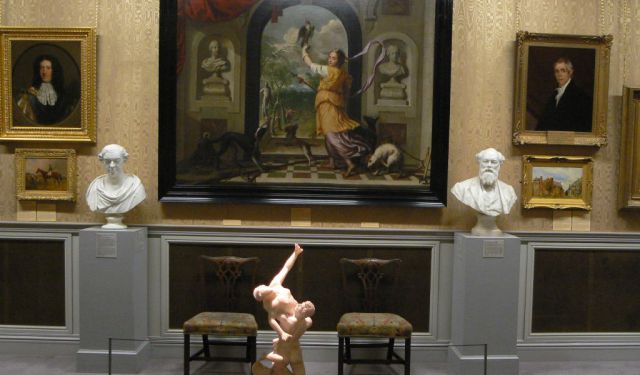 Chester cultural and historical heritage is both rich and various. Thus, the museums and art galleries of the city are a must-visit. The popular attractions are well preserved, structured and easily one of the greatest entertainment and educational venues in Chester. Take this tour to experience and learn about everything Chester has to offer.
How it works: Download the app "GPSmyCity: Walks in 1K+ Cities" from iTunes App Store or Google Play to your mobile phone or tablet. The app turns your mobile device into a personal tour guide and its built-in GPS navigation functions guide you from one tour stop to next. The app works offline, so no data plan is needed when traveling abroad.

Baron Fine Art Gallery is located next to the Watergate Street Gallery. Baron Fine specializes in 19th and 20th century oil paintings, watercolors and drawings. The gallery is particularly famous for its vast collection of watercolors. Baron Fine Art was founded in 1990 and offers exhibits from around the world.

Image by Jennifer R. on Wikimedia under Creative Commons License.
2

The Watergate Street Gallery offers a vast collection of original works of art and prints. Over one thousand framed pictures of high quality are presented at the permanent exhibits from local, national and international artists. The gallery was founded in 1992 and is a must-visit while in Chester.

Image by Hieronymus Hess on Wikimedia under Creative Commons License.
3

Once upon a time, Romans built a Dewa fortress as part of their ever expanding empire. The fortress is buried under the city these days, yet families may venture across ancient grounds and see what it might have been like for Romans living in the time period. Here you will admire archaeological remains, such as pottery and Roman armor. Audio-visual presentation is also available.

Image by chestertouristcom on Wikimedia under Creative Commons License.
4

The Cheshire Military Museum is a military museum in Chester. The museum covers the history of four British Army regiments connected with the County of Cheshire from 1685 onwards: the Cheshire Regiment, the Cheshire Yeomanry, the 3rd Carabiniers, the 5th Royal Inniskilling Dragoon Guards, and also the Eaton Hall Officer Cadet School. The museum is located in the barracks at Chester Castle.

Operation hours: Daily: 10 am - 5 pm.
Image by Dennis Turner on Wikimedia under Creative Commons License.
Sight description based on wikipedia
5

Grosvenor Museum is located on Grosvenor Street in Chester. Its full title is The Grosvenor Museum of Natural History and Archaeology, with Schools of Science and Art, for Chester, Cheshire and North Wales. It takes its name from the family name of the Dukes of Westminster, who are major landowners in Cheshire. The museum opened in 1886, it was extended in 1894, and major refurbishments took place between 1989 and 1999. Its contents include archaeological items from the Roman period, paintings, musical instruments, and a room arranged as a Victorian parlour.

The museum is in Ruabon red brick with sandstone dressings, and it has a red tile roof in free Renaissance style. Above the door are spandrels with carvings representing Science and Art. The Dutch gables are carved with peacocks flanked by the supporters of the Grosvenor arms. In the entrance hall are four columns made from Shap granite, and a mosaic which features the city arms, which was made by the firm of Ludwig Oppenheimer. The museum has over 100,000 visitors each year. The museum contains a collection of Roman tombstones. It also owns 23 paintings by Louise Rayner, which is the largest number in any public collection. The museum also holds six recorders made by Peter Bressan; four of these form the only complete set of Bressan recorders in the country.