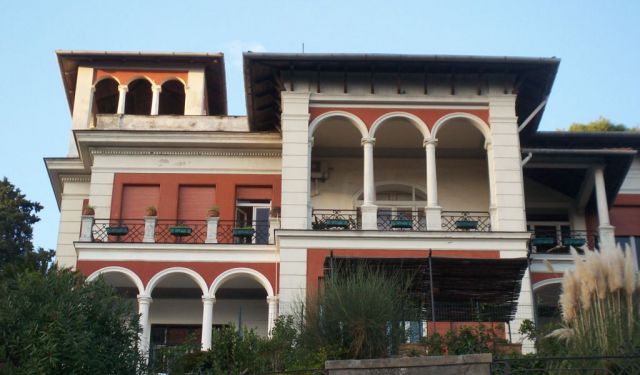 Image by Johnnyrotten on Wikimedia under Creative Commons License.

Chiaia is deservedly considered to be the most exquisite part of Naples. Refined and exclusive, it hosts world-known brand name stores and is the place where one can always meet a famous personality. Home to once-in-a-lifetime pizzas and amazing seafood restaurants, it also offers gorgeous views of the Bay of Naples and its marina. The famous volcano Vesuvius can be seen from Chiaia too. Villa Pignatelli and Castello Aselmeyer are arguably the neighbourhood’s main attractions, however as you wander its streets you’ll see that there is much more to it. This self-guided tour will lead you through the most popular places in Chiaia.
How it works: Download the app "GPSmyCity: Walks in 1K+ Cities" from iTunes App Store or Google Play to your mobile phone or tablet. The app turns your mobile device into a personal tour guide and its built-in GPS navigation functions guide you from one tour stop to next. The app works offline, so no data plan is needed when traveling abroad.

The Villa Comunale or People’s Park has well manicured lawns and tree lined paths today. It is studded with fountains, neoclassical sculptures and busts commemorating heroes who were born in Naples in the late 19th and early 20th century. The Anton Dohrn Aquarium and Zoological station, a well known scientific research center and the Naples Tennis Club are located here. A popular antique market called the Fiera Antiquaria Napoletana, is held in the Villa Comunale on weekends all through the year.

Image by Baku on Wikimedia under Creative Commons License.
2

The Villa Pignatelli, from the date of construction has remained the architectural centerpiece of the Villa Comunale. The Doric columns in the façade can be seen by viewers from 50 yards away. Today, it is a venue for exhibitions and temporary shows and houses a small museum. The ground floor consists of a magnificent ballroom, a library, a large dining room and a series of rooms where museum objects are displayed. The green room houses the display of porcelain objects from the 17th to the 19th centuries and other rooms exhibit valuable sculpture and landscapes. The treasure at the museum is the painting of St. George by Francesco Guarino. The grounds of the Villa Pignatelli host a small coach museum with 18th and 19th century French and German vehicles on display.

Image by jzpresto on Wikimedia under Creative Commons License.
3

Castelo Aselmeyer is a beautiful castle, the work of Lamont Young. He was a prominent architect of Naples and made many buildings and roads in the city. Castelo Aselmeyer is a Neo-Gothic building. Like the other works of this architect, the castle too boasts of an original design and a magnetic, hypnotizing beauty.
Image by Baku on Wikimedia under Creative Commons License.
4

The 16th-century palace of Roccella hosts the Palazzo delle Arti Napoli, which contains the civic collections of art belonging to the City of Naples, and features temporary exhibits of art and culture: everything from painting, photography and sculpture to multimedia, design and architecture. There is also an experimental art-lab and a multimedia library.

The San Martino Monastery is a complex that was once managed by monks of the Carthusian Order and dedicated to St. Martin of Tours. Today, it houses a museum with diverse religious and historical art exhibits.

The Certosa di San Martino or St Martin’s Charterhouse was commissioned by Charles of Anjou in 1325 and completed in 1368 during the reign of Queen Joan I of Naples. It was built on top of the Vomero Hill and commanded spectacular views of the bay. It was expanded in the 16th century and the present structure is the result of a 17th century expansion, designed by renowned architect, Cosimo Fanzago, in ornate Neapolitan Baroque style. The monastery was closed in the early 19th century during the reign of Napoleon’s brother in law, Joachim Murat. In 1866, it was converted into a museum dedicated to the artistic history and culture of Naples by Giuseppe Fiorelli.

The San Martino Museum consists of exhibits displayed in the former cells of the Carthusian monks. Objects exhibited include a range of paintings and artifacts from the 13th to the 19th centuries, 16th and 17th century frescoes and a separate section displaying Neapolitan folk art. The treasures at the museum are the famous collection of Neapolitan nativity scenes, including the celebrated Cuciniello’s Crib, depicting 28 angels, 162 people, 80 animals and over 450 miniature artifacts, that is regarded as the finest in the world.
Image by Giorgio Sommer on Wikimedia under Creative Commons License.
6