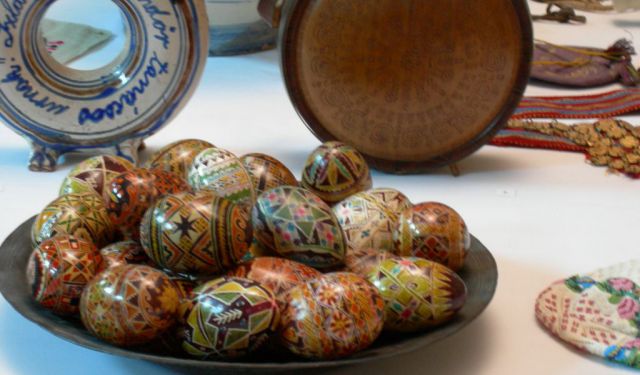 Bucharest is good not only for adults, but also has plenty to offer the little ones. The outstanding Museum of the Romanian Peasant will equally impress children and grown-ups. The Geology Museum as well as the Grigore Antipa Museum of Natural History are considered to be a must for children while in Bucharest.
How it works: Download the app "GPSmyCity: Walks in 1K+ Cities" from iTunes App Store or Google Play to your mobile phone or tablet. The app turns your mobile device into a personal tour guide and its built-in GPS navigation functions guide you from one tour stop to next. The app works offline, so no data plan is needed when traveling abroad.

Located behind the Museum of the Romanian Peasant, the Peasant Club will help the parents get their kids amused when in Bucharest. Thanks to the puppet shows organized every Saturday morning, there shouldn't be a problem. The Peasant Club has several stories in its repertoire, such as Coliba Iepurasului (Rabbit's Hut), Ratusca cea Urata (The Ugly Duckling) and Vrajitorul Pofticios (the Greedy-guts Wizard). Also, in December, the club puts on a special Christmas show.

2) Museum of the Romanian Peasantry (must see)


Image by Andrei Stroe on Wikimedia under Creative Commons License.
Sight description based on wikipedia
3

The Grigore Antipa Museum of Natural History is recognized as one of the best natural history museums in Europe. Its magnificent collection, which includes even dinosaur skeletons, is enough to keep both kids and their parents occupied all day. The museum also offers a variety of workshops, interactive displays, 3D films, artificial caves, as well as a wealth of animal and plant life typical of Romania.

The museum's building also deserves mentioning. It was constructed in 1908 at the request of Grigore Antipa, renowned Romanian naturalist, who ran the museum up until his death in 1944. The design was done by engineer Mihail Rocco who took into account all of Antipa's suggestions. The beautiful facade was crafted by architect Gregory Cerchez, decorated with sculptures representing natural history and a bronze eagle on top.

Over the century, the building has withstood several earthquakes. Not long ago, it was closed for an almost three year renovation prior to reopening in 2011. Romanian billionaire, George Iaciu, contributed to the museum's collection by donating 37 artifacts including an artificial life-size copy of an elephant head.

Situated on one of Bucharest's oldest streets, Calea Victoriei, the Cantacuzino palace was built in 1898-1900 for the eponymous head of the Romanian Council of Ministers, Gheorghe Grigore Cantacuzino. The building features French Baroque style of the Ludovic XVI period. The interior is decorated with fabulous monumental paintings by G.D. Mirea, Costin Petrescu, Arthur Verona, as well as sculptures by Frederick Storck and Em. Becker. It has an impressive facade with marble steps, two stone lions and a shell shaped cover.

In 1956 the Cantacuzino Palace became home to the George Enescu Museum which is dedicated to the famous Romanian composer and musician. Its collection includes Enescu's personal things, including the violin he received at the age of 4, numerous diplomas and medals, musical writings, etc.