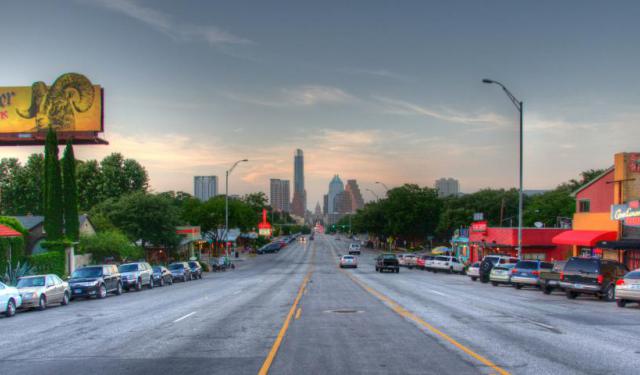 Image by abbamouse on Flickr under Creative Commons License.

While taking the children on a walk in downtown Austin, entertain yourselves with an educational and enjoyable tour, including a nature center, interactive plays, museums and parks.Take the following tour to discover the best kids' entertainment Austin has to offer.
How it works: Download the app "GPSmyCity: Walks in 1K+ Cities" from iTunes App Store or Google Play to your mobile phone or tablet. The app turns your mobile device into a personal tour guide and its built-in GPS navigation functions guide you from one tour stop to next. The app works offline, so no data plan is needed when traveling abroad.

The land for Butler Park was donated to the city by the heirs of 19th century businessman Michael Butler in 1941. Over the years it has been used for various recreational services, the park being completed in 2007. It is located on the south bank of Lady Bird Lake and has a beautiful view of downtown Austin and its skyscrapers. Located in the park is a realistic statue of legendary guitarist, and native Texan, Stevie Ray Vaughan.
Image by jjwright85 on Flickr under Creative Commons License.
2

The Flying Theatre Machine is the only improvisational theatre for kids in Austin. This interactive theatre features wonderful performances with cowboys, super powers and various creatures from children’s stories. The Flying Theatre Machine is part of the Hideout Theatre.
Image by Pink Sherbet Photography on Flickr under Creative Commons License.
3

3) Museum of the Weird

The Museum of the Weird is indeed weird. Oddities of all kind are displayed in this small 6th Street location. The museum was created by Steve Busti and is full of such things as the Fiji mermaid, the cyclops pig, the Hand of Glory, mummies, Frankenstein and other monsters. For those who enjoy spiders, the museum exhibits live Texas tarantulas.

Image by bionicteaching on Flickr under Creative Commons License.
4

4) The Capitol Visitors Center (must see)

The Capitol Visitors Center is located in the southeast corner of the State Capitol grounds. Built in 1856, it is the oldest office building in Austin, serving as the General Land Office until 1918. In 1994, the building became the visitor center, providing information about Texas history and the everyday activities of the capitol.
Image by rutlo on Flickr under Creative Commons License.
5

The Scottish Rite Children's Theatre is an old Austin tradition. Since its establishment in 1869, it has featured theatre performances of wonderful adaptations of beloved children’s stories and fairy tales. With stunning decorations and clever dialogue, it engages young audiences, encouraging their participation and imaginations.
Image by charliekwalker on Flickr under Creative Commons License.
6

The Bob Bullock Texas State History Museum, is a history museum in Austin, Texas. The museum is a division of the Texas State Preservation Board. Its stated mission is to tell "the Story of Texas."

The history museum is named after former Texas Lieutenant Governor Bob Bullock, who championed its creation. It has three floors of interactive exhibits; the first floor theme is "land," the second floor theme "identity," and the third floor theme "opportunity." The Texas Spirit Theater on the second floor has 200 seats and three screens and is used as a multimedia special effects theater, playing two shows daily. The museum also has a 70mm film-based IMAX theater, the only one in Austin. The theater seats 400 and has a projector with both 2-D and 3-D capability.


Image by WhisperToMe on Wikimedia under Creative Commons License.
Sight description based on wikipedia
7

The Texas Natural Science Center at Texas Memorial Museum is a great place to go for an insightful look into Texas archeology. Several museum floors are dedicated to fossils, minerals, Jurassic animal skeletons and fragments of biologic remains. There are also interactive dioramas and moving exhibits. It contains a gift shop with loads of educational items and toys. Entrance is free and the museum grounds are a pleasant place to take a walk.