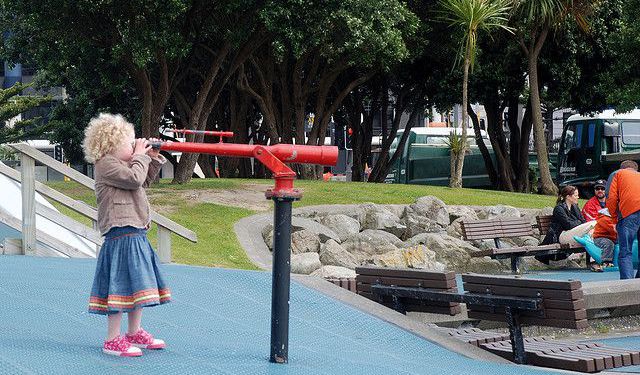 Image by PhillipC on Flickr under Creative Commons License.

New Zealand can be a perfect place to entertain your entire family. There are several playgrounds around the city and unique museums about the life of this remote archipelago. This self-guided tour will lead you to the most popular children's attractions in Wellington.
How it works: Download the app "GPSmyCity: Walks in 1K+ Cities" from iTunes App Store or Google Play to your mobile phone or tablet. The app turns your mobile device into a personal tour guide and its built-in GPS navigation functions guide you from one tour stop to next. The app works offline, so no data plan is needed when traveling abroad.

Waitangi Park, a re-modelled recreation-space, dates from 2005. It lies near Te Papa (the National Museum of New Zealand), Former Post and Telegraph Building and Courtenay Place.

The facilities include a waka-launching area, a children's playground, a skateboard-zone, and a large grassy space.

Wraight Athfield Landscape Architecture (WALA) won the competition held to design the park. WALA saw the design through to completion in 2005. Wellingtonians formerly referred to the Waitangi Park area as Chaffers Park.

Image by PhillipC on Flickr under Creative Commons License.
Sight description based on wikipedia
2

The long term exhibitions of cultural objects focus on New Zealand history, Māori culture and New Zealand's natural world. The hands-on and interactive exhibitions focus on engaging particularly young visitors and include both indoor areas and out-door areas built and planted for the purpose.

All permanent exhibitions are free.

Opening hours: Daily 10 am − 6 pm (except Christmas Day).
Image by Sergio Alexandro on Wikimedia under Creative Commons License.
Sight description based on wikipedia
3

Civic Square is an open public area at the centre of Wellington. It marks the boundary between the financial district to the north and the entertainment district to the south.

The square is surrounded by council buildings each with a distinctive architectural style: the town hall and council offices, the Michael Fowler Centre, the central library, the City-to-Sea bridge which Capital E is part of is home to the National Theatre for Children and creative technology experiences, and the City Gallery. The main tiled area is the roof to the underground library car park.

The first real plans for the Civic Square date back to 1944.

The project was completed in 1992.

Along the Wellington waterfront there is the fascinating Frank Kitts Park. The park is named in the honor of Frank Kitts, the longest-serving Mayor of Wellington, New Zealand, having held the post from 1956 to 1974. The park is always crowded with people just walking or who are here with their children, who can play in the safe playground situated within the park. The park is also home to a number of wonderful artistic sculptures, the most impressive of them is the water sculpture "The Albatross" by Tanya Ashken.
Image by US Embassy on Flickr under Creative Commons License.
Sight description based on wikipedia
5

The Wellington Cable Car is a funicular railway, rising 120 m over a length of 612 m. It is widely recognised as a symbol of Wellington.

The Cable Car has two cars, which start from opposite ends of the line and pass in the middle. They are attached to each other by a 30-mm diameter cable, supported by 120 rollers, which runs round a pulley at the top of the hill.

The Carter Observatory stands at the top of the Botanic Gardens. It re-opened in March 2010 following a NZ$5 million refurbishment, with a new exhibition and digital planetarium celebrating the culture, heritage and science of the Southern Skies.