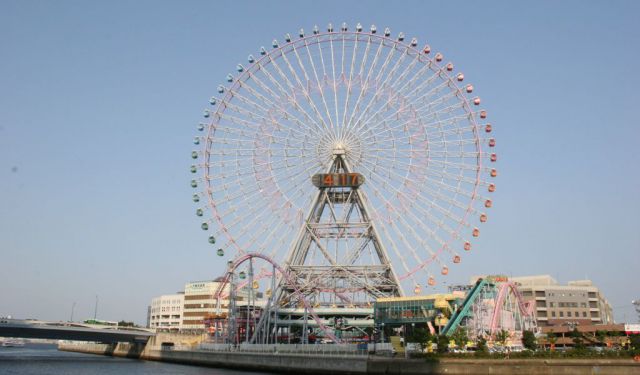 Image by Akitsumaru on Wikimedia under Creative Commons License.

Yokohama has many unique attractions for children. There are special museums for kids, amusement parks with the latest technology, the zoo with rare animals, etc. This self-guided tour will lead you through these and other exceptional places that all children are sure to enjoy.
How it works: Download the app "GPSmyCity: Walks in 1K+ Cities" from iTunes App Store or Google Play to your mobile phone or tablet. The app turns your mobile device into a personal tour guide and its built-in GPS navigation functions guide you from one tour stop to next. The app works offline, so no data plan is needed when traveling abroad.

Nogeyama Zoo is a small zoo situated in the Nogeyama park. There are about 1400 animals of 100 different species. The zoo is famous for its Red Pandas. The entrance to the zoo is free. There is a mini-zoo for children, where children are allowed to feed and touch animals. It is open from 9:30 am to 4:00 pm and is closed on Mondays.
Image by simimasa on Flickr under Creative Commons License.
Sight description based on wikipedia
2

It is primarily used for baseball and is the home field of the Yokohama BayStars. The stadium is unique, because it features dirt around the bases and pitcher's mound, but with dirt colored turf infield and base paths. The entire green portion of the field is now turf. The stadium is one of only three venues in Japan, with an American look, the others are Kobe Sports Park Baseball Stadium in Kobe and Mazda Stadium in Hiroshima.

Image by Craig Wyzik on Flickr under Creative Commons License.
Sight description based on wikipedia
3

The Yokohama Doll Museum is a true lure for kids. There are about 13,000 dolls from all over the world, including folk dolls and modern dolls. Some of the dolls are of historical value. The museum can tell you about the history of Yokohama, as there is a connection between the dolls and the city. Here you can also learn about the practice of doll exchange between nations.

Image by 湖の国の王子 on Wikimedia under Creative Commons License.
4

Yamashita is a very nice park, situated just on the shore of Tokyo Bay, bordering the new urban development area Minato Mirai 21. It features flower gardens, alleys and a fountain. The park also gives opportunities for great photo shots and panoramic views over the sea and the Minato Mirai giant buildings.
Image by Kounosu on Wikimedia under Creative Commons License.
5

The Cosmo World is a modern amusement park set in the harbor of Yokohama. There are 27 fun attractions. Its Ferris wheel is the largest in the world and never fails to impress the visitors. It is called Cosmo Clock 21. The Clock can take 480 passengers at a time and stands 112 meters tall! One rotation of the 100-metre diameter wheel takes 15 minutes; it looks particularly magical at night when it is illuminated and the lights change their colors. The attractions here are high-tech and three-dimensional.
Image by Carles Tomás Martí on Flickr under Creative Commons License.
Sight description based on wikipedia

Yokohama is a metropolis near Tokyo. Despite vicinity to the capital, life here is more relaxed and not as chaotic as one would imagine. This guide is to give you insight into the everyday life of the people of Yokohama.

There are many historic Buddhist temples near Yokohama, some of which are listed as national heritage. The most significant of them are concentrated in the town of Kamakura. This self-guided tour will lead you through some of these historic religious sites that reveal the culture, tradition and beliefs of the East.

Located near Tokyo Metropolitan Area, Yokohama is a newer type of city distinguished by its lavish shopping scene and giant buildings. It is a home to a number of museums, highly-evolved seafront Minato Mirai district and picturesque Chinatown. A visit to Yokohama makes a fresh break from the neighboring Tokyo. Take this orientation walk to enjoy your trip to Yokohama to the maximum.