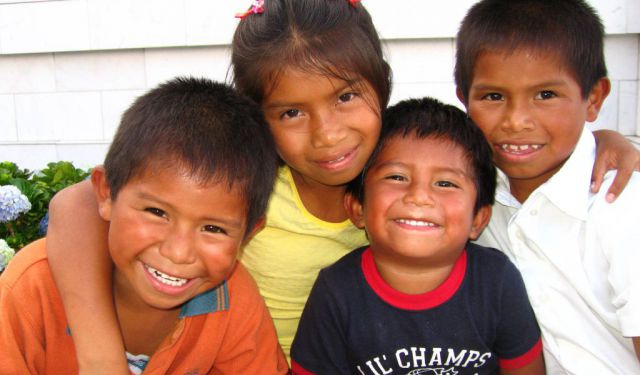 Image by Young in Panama on Flickr under Creative Commons License.

As many other cities in the world, San Jose has a lot to offer to its young tourists to keep them occupied and happy. Museum of Children, for instance, is full of fun, with plenty of educational activities and adventures. Take this tour for an unforgettable experience for you and your family.
How it works: Download the app "GPSmyCity: Walks in 1K+ Cities" from iTunes App Store or Google Play to your mobile phone or tablet. The app turns your mobile device into a personal tour guide and its built-in GPS navigation functions guide you from one tour stop to next. The app works offline, so no data plan is needed when traveling abroad.

The Plaza de la Cultura is a lively downtown square where the locals hang out, show off their musical skills, have their art on display, or feed the pigeons. It is surrounded by shopping and housing some of the major museums. You can visit many little vendors and even see some street entertainers. It is also a favorite spot in town among locals for marimba bands, jugglers, clowns, and the like. There is a lot of food to be eaten, as well as places to buy souvenirs. If you're lucky there will be a dance or music performance going on.

The Teatro Nacional is to be found on the southern end of the plaza. You can also visit the Museo del Oro Precolumbino here. The Grand Hotel of Costa Rica is on the western side.

Image by cphdk on Flickr under Creative Commons License.
Sight description based on wikipedia
2

The Pre-Columbian Gold Museum is located in a subterranean building underneath the Plaza de la Cultura and is managed by the Banco Central de Costa Rica. The museum has a substantial collection of over 1600 artifacts of Pre-Columbian gold dating back to AD 500.

The Museo Numismático (National Coin Museum) is also located in the same building on the ground level and features displays dating back to 1236, including coins, banknotes and unofficial items such as coffee tokens. The "Casa de Moneda" is also located on the ground level with information on the history of minting in Costa Rica and displays illustrating its development.

Tip:
The ground level focuses on currency while the lower two levels focus on pre-Columbian gold. There are also exceptional traveling exhibits, so keep an eye out!
There are free lockers for wet coats, umbrellas and bags, but you'll be asked to remove your hat so that security cameras have a clear view of your face.
The gift shop has some very nice reproductions as well as beautiful modern native art and offers a welcome antidote to cheap souvenir shops in the city.


Image by Puroticorico on Wikimedia under Creative Commons License.
Sight description based on wikipedia
3

The Serpentario is very popular among young tourists. In this downtown snake museum, you can learn more about the species that live in Costa Rica. You can also see other members of the lizard family such as iguanas, frogs, caimans and turtles. Once a week, the Serpenario organizes a snake show for the tourists.
Image by Carlos Luna on Flickr under Creative Commons License.
4

This is the National Park of Costa Rica, located in the downtown section of Barrio La Soledad. It is full of wonderful tropical trees and exotic plants from the country. It is also quite popular among locals, as they often come here to eat lunch, read newspapers, and allow their children a safe place to play.

You will also want to check out the big bronze monument that rests in the park. It depicts the battle of Central America against William Walker, who tried to invade the area in 1856. Costa Rica took on a primary role in that five-country battle, as prominently displayed in the monument erected in 1895. It was designed by Louis Carrier Belleuse, who studied under Rodin at one time. For people visiting from the U.S., seeing the monument and the history it displays may be quite a shock, as the country fought against Americans of the time.

Why You Should Visit:
As some of the park areas in San Jose are covered by paving slabs, this one is great to have grass. The sculptures are fun, too, and the koi pond adds further interest.
The park has many different species of flora, places to sit, and seems to be a very safe place during the daylight hours.
Image by Upupa4me on Flickr under Creative Commons License.
5

The Zoológico Simón Bolívar is an urban park of approximately 14 hectares, located in downtown San José – the oldest botanical garden and zoo in Costa Rica. The name pays homage to Latin American national founder Simón Bolívar. It is administered by a conservation nonprofit foundation called Fundazoo. All animals in the zoo are orphaned, injured or have been disabled and are nursed back to health in hopes of releasing them.

Why You Should Visit:
Good variety of rescued animals and birds, with the place having lush foliage and plants that provide shade and a nice natural habitat for the creatures.

Tip:
Try to get there at the opening or between 12-1pm so you can see the animals being fed.

The Spirogyra Butterfly Garden is a small garden located behind a lovely little house. The gardens may not be large, but they are a welcome reprieve from the usual city sights and sounds. A welcome oasis of peace and beauty awaits visitors. While you probably won’t be here for more than a couple of hours, it is definitely worth the visit if you love flowers and peaceful settings.

The garden boosts around 1200 species of butterflies and about that many moths. Of course, there are also plants for the caterpillars to eat and then transform themselves into incredible butterflies. And there are also plants for those butterflies that sip nectar to feed themselves. The life cycles of butterflies are very well explained and you can see alive examples of each stage at the end of the garden. There's no need to be an expert as just admiring the beauty of nature is a lovely way to embrace the Pura Vida! Pictures, of course, are a must.

Plan to go in the cool morning to see the butterflies getting going in the morning as the sun warms their wings and have a bite of lunch in the Colibri Café Galleria. It is a great spot to watch the hummingbirds and butterflies enjoying their lunch as well. The garden is located across from the El-Pueblo shopping center.

Tip:
Besides the butterfly garden, the visit includes a short hike in the small nearby forest overlooking the river.

Museo de los Niños is a wonderful place to take kids. The building itself is an old prison, although now it has a castle appearance from the outside. Any older kids will love to see the old prison cell exhibits. The museum is geared to kids up to through the age of 12, but the exhibits are interactive, so even the older kids may become engrossed with them.

Kids will love seeing the sarcophagus in the Egyptian section. They can also feel what an earthquake is like, explore the outer regions of space and make some music. If you’re raising your little explorers to read Spanish this is an especially practical excursion as all the displays are written in Spanish. However, if it's not part of the child’s repertoire, that’s still not a reason not to visit. Kids are kids and they will figure out the exhibits, sometimes by watching their peers.

The Museum is located at Calle 4 and Avenida 9. The name on the building is “Centro Costarricense de Ciencia y Cultura” so don’t be confused when the driver drops you off there.

Tip:
Bring a packed lunch – the food in the cafeteria is small and with very basic food.
Note also that the surrounding neighborhood is not a good place for children, so make sure you have transportation onto the grounds.