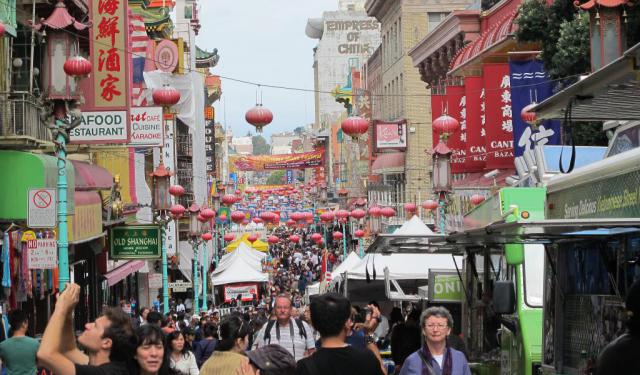 Image by Christian Mehlführer on Wikimedia under Creative Commons License.

San Francisco Chinatown is the largest Chinatown outside of Asia and the oldest Chinatown in North America. It provides an astounding abundance of varied merchandise at surprising prices, a great selection of restaurants and gift shops. San Francisco's Chinatown features several amazing attractions that can be enjoyed, ranging from museums and churches, to specialty shops and restaurants. Take this walking tour to explore the main tourist attractions in Chinatown, San Francisco.
How it works: Download the app "GPSmyCity: Walks in 1K+ Cities" from iTunes App Store or Google Play to your mobile phone or tablet. The app turns your mobile device into a personal tour guide and its built-in GPS navigation functions guide you from one tour stop to next. The app works offline, so no data plan is needed when traveling abroad.

The Dragon's Gate was installed in 1969, as a gift from the government of the Republic of China. This ornate, dragon-guarded gateway marks the southern entrance to Chinatown. Past the gates, visitors will see elaborate 1920s streetlights sculpted to resemble golden dragons lighting the way.

Why You Should Visit:
An iconic entryway and definitely worth posing under the arch for a colorful photo.

Image by BrokenSphere on Wikimedia under Creative Commons License.
2

Chinese Baptist Church, property of the American Baptist Home Mission Society of New York was erected 1888. The first Chinese Baptist Church in San Francisco that was established in 1880 was a multi-generational, bilingual and bi-cultural church. When Chinese students were not permitted to attend the city's public schools, the Church offered day school for children and night school for adults. Today it offers English language classes and an outreach program to immigrants from China and other places.

The Church’s first meeting was held by Dr Jesse B. Hartwell, in 1880 on Washington Street across from Portsmouth Square. The Church was later moved to Waverly place in 1888 which is its current location.

The first building of Chinese Baptist Church was destroyed in the devastating earthquake of 1906. A lot of effort was put during the two years of construction of the new building at the same location after clearing up the ruins.

The new building, completed in 1908, was well built with a peaceful sanctuary and a reading room on the ground floor. The first and second floors consisted of classrooms dedicated for the education and learning of children. The third floor houses a fellowship hall and a few office rooms for the pastors of the church. Major renovations were taken up in 1980 for the centennial celebrations, in which the sanctuary was greatly modified. In 1988, the church spread out its wings to reach the southern province of the city where dwell the English speaking Asian families. In the year 2000, the building was modernized by the addition of elevators and modular classrooms on the second and fourth floors.

Image by BrokenSphere on Wikimedia under Creative Commons License.
3

Kong Chow Temple was founded by the Cantonese community living in Chinatown in San Francisco in the year 1849.

The temple was established in the year 1851.In 1854 the temple was renamed as Kong Chow Clan Association. The Association served to the religious needs of the locals and also tended to the social welfare of their fellow migrants. In the 1906 earthquake, the original building was destroyed. The importance of this institution was reflected in the community’s efforts to rebuild it. In 1977, the temple was relocated to the Kong Chow Building in Chinatown and has remained there since.

The Kong Chow Temple is dedicated to Guan Di, the Chinese God of war and literature. Chinese stores and restaurants often display his image since he is believed to bring good luck to business. Legend has it that the wife of Harry Truman once visited this temple to pray for Truman’s election results and asked for a prediction of the election. Her prayers were answered since Truman did win the elections and became the 33rd President of the United States of America.

The sculpture of the mighty Guan Di is very rare to find and the Kong Chow Temple is the one of the few places where you can see the robust image of this God of war. Participate in fun customs and try testing your luck by tossing goose egg halves or throwing joss ticks. Whether you are an atheist or a believer, the Kong Chow Temple is a must see in Chinatown of San Francisco.
Image by Tai Pan of HK on Flickr under Creative Commons License.
4

Get a peek into the cultural and spiritual aspect of the Far East in San Francisco, by visiting the Tin How Temple. It is the oldest Chinese temple in the city. Built in honour of one of the most popular Chinese deities, Mazu or popularly known as Tin How, this Goddess of Seven Seas is said to have powers to protect those traveling long distances.

The Temple dates back to the mid nineteenth century when it was built by early Cantonese settlers who were among the first immigrants to the country. Built in 1852, not much has changed here in the passage of time. Even today, one can see old women preparing offerings for the deities, smell the sweet burning of incense and feel the power of silence in the quiet chants meant to appease the Buddhist deities.

One is instantly transported away from the city after climbing the three flights of stairs that lead to the Temple of Tin How. At the end of the third flight, one is welcomed by the beautiful shrine of Tin How. Sitting gracefully in the centre is Mazu with her assistants by her side. The ceiling is filled with beautiful red lanterns that are tied by devotees. Some of the items in the Temple are over a century old. The Temple of Tin How is a must visit when you are in Chinatown.
Image by TimShoesUntied on Flickr under Creative Commons License.
5

The Portsmouth Square sits in the midst of the hustling Chinatown and is nicknamed the ‘Heart of Chinatown’.

The Square gets its name from the ship that served in the Mexican- American war in the mid-nineteenth century. The vessel’s Captain, John Berrien Montgomery was also the first to raise the American flag on these grounds, after having successfully captured Yerba Buena, which was later named as San Francisco.

The Portsmouth Square is also the place that witnessed the first wave of a lot of movements and was the heart of many activities in the history of the city. In 1847, the first public school was erected on the south west corner of the Portsmouth square. The school soon became the assembly point for a lot of religious and political gatherings. The year 1848 saw the announcement of the event that would change the history of San Francisco. Sam Brannan announced his discovery of gold, the first signs of the Gold Rush.

For revisiting history or just visiting a park, the Portsmouth Square is a sight to visit in San Francisco.
Image by BrokenSphere on Wikimedia under Creative Commons License.
6

United Commercial Bank formerly known as Bank of Canton, was originally built in 1909 to house the Chinese Telephone Exchange. The building is an amazing landmark and a historical site of Chinatown. The female telephone operators who used to work here once knew English, five dialects of Chinese and all their clients by name and address. In 1949 the exchange was closed, and in 1960 the building was bought and restored by the Canton Bank.
Image by Kjetil Ree on Wikimedia under Creative Commons License.
7

Golden Gate Fortune Cookie Factory opened in 1962. It is the only fortune cookie bakery in the city where the cookies are still made by hand. Here, two women make daily over 20,000 fortune cookies. They are using a conveyor belts that look like miniature waffle irons. The admission is free.

Telegraph Hill offers an unexpected and delightful getaway in the heart of San Francisco. The name Telegraph Hill came from a structure built on the top of the hill in the mid-1800s, which would visually signal the city with regard to the type of vessels passing through the Golden Gate. It is famous for the spectacular stairways that traverse some of the city's most charming terrain, and for...  view more

It is well known that San Francisco is the place where gay and lesbian culture flourished. While Castro District houses many of the city's gay-owned businesses and households, LGBT culture is considered a distinct part of San Francisco's identity. Use this list to explore the most visited gay attractions in San Francisco.

Home to some of the most exciting clubs and bars found the world over, the Nightlife Tour in San Francisco features a wide selection of hot spots to dance the night away. Being a major metropolitan area with a diverse community, the range of musical flavors available here is truly astounding. Whether looking for top DJs or big name music acts, or just a solid local talent spinning your favorite...  view more