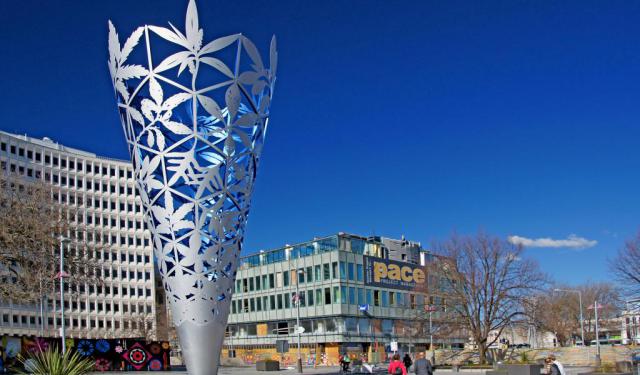 Image by Allie_Caulfield on Wikimedia under Creative Commons License.

Although Christchurch is not very large, it is still home to a number of New Zealand's major landmarks. There is no shortage of beautiful buildings, parks, gardens and other places of interest. Ravaged by a powerful earthquake in 2011, which caused damage to many local attractions, Christchurch has still retained much of its charm and has a lot to offer visitors in terms of sightseeing. Take this tour and appreciate some of the city's main landmarks.
How it works: Download the app "GPSmyCity: Walks in 1K+ Cities" from iTunes App Store or Google Play to your mobile phone or tablet. The app turns your mobile device into a personal tour guide and its built-in GPS navigation functions guide you from one tour stop to next. The app works offline, so no data plan is needed when traveling abroad.

Erected in 1993, the Kate Sheppard National Memorial is a bronze edifice with sculptures of women suffragists, which adorns the banks of the Avon river in Christchurch. It commemorates Kate Sheppard, a great woman who fought for New Zealand women's right to vote and had it achieved in 1893. Her deed has inspired many women around the world.
Image by D. Modiano on Flickr under Creative Commons License.
2

This grandiose memorial, unveiled in 1924, is dedicated to all the soldiers who fought in two World Wars. Designed by New Zealand architectural firm Prouse and Gummer, the bridge appears in the form of a white stone arch adorned with ornaments and sculptures and recreates the bridge through which the soldiers marched on their way to war. The Bridge of Remembrance joins the banks of the Avon river on Cashel Street. The memorial suffered great damage from the earthquakes that hit the town in 2011.
Image by Krzysztof Golik on Wikimedia under Creative Commons License.
3

Not far from the town's main cathedral stands a small but significant church. St. Michael Church was the first parish in Christchurch and was built of wood in 1872. At the time it was regarded as one of the biggest timber churches in the world. The building features late Victorian Gothic style with some medieval elements. Starting September 2010, it has survived three major earthquakes, the strongest of which has caused great damage to St. Michael's Bevington three-manual pipe organ.
Image by Heather Cuthill on Flickr under Creative Commons License.
4

Commissioned in 1855 by the Provincial Government, Hagley Park is the largest urban open space in Christchurch. Centrally located and bounded by the Avon river and nearby roadways, the park is distinguished for the many trees and broad open valleys. The Christchurch Botanic Gardens are located within this loop and frequent bridges provide connections. The Gardens contain a collection of beautiful flowers and trees from around the world. Many visitors also come to the park to see its thronging wildlife, including thousands of birds. Due to the earthquakes that hit the area in 2011, Christchurch City Council has closed the Botanic Gardens glasshouses: Fern House and Foweraker House, Gilpin and Garrick House, Townend House, and Cunningham House.
Image by Greg O'Beirne on Wikimedia under Creative Commons License.
5

The Twelve Local Heroes is a series of bronze busts which are set along Worcester Boulevard outside the Arts Centre. The busts commemorate twelve prominent local people from the late 20th century. Established through a special trust, the busts by sculptor Mark Whyte were four years in the making before being unveiled in 2009.

The sculptures have been temporarily removed from their position on Worcester Blvd to facilitate the post earthquake restoration of the Engineering block of the Arts Centre of Christchurch. Following the restoration, it is envisaged that they will return.

Image by GordonMakryllos on Wikimedia under Creative Commons License.
7

A number of Jubilee clocks were constructed and erected throughout the British Empire in commemoration of the Golden and Diamond Jubilees of various British monarchs. This Diamond Jubilee Clock Tower, located at the intersection of Victoria Street and Montreal Street, marks the Diamond Jubilee of Queen Victoria. It is made of volcanic stone and limestone with ornate wrought iron work and coloured glass. The tower also has two white marble plaques and one bronze plaque set above the arches.

It was seriously damaged by earthquake on 22 February, causing the clock to stop at 12:55. The clock itself needed to be restored, but it was considered to leave one of the clock faces at 12:51 as a reminder of the earthquake. On 22 October 2013, Christchurch Mayor Lianne Dalziel officially unveiled the newly restored Jubilee Clock Tower, and placed a time capsule on the site for future generations to discover.

Image by Bernard Spragg. NZ on Flickr under Creative Commons License.
Sight description based on wikipedia