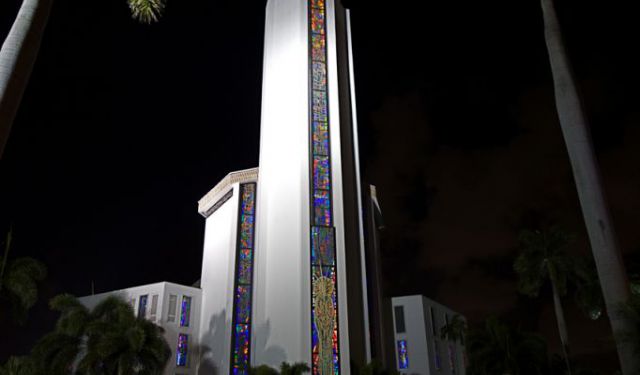 Image by jikatu on Flickr under Creative Commons License.

This multi-faith east coast city is home to a whole range of outstanding churches that are architectural highlights as well as places of worship. Their structural design and interior decoration feature a wide range of styles from strictly traditional to modern minimalist, giving Fort Lauderdale a quite unique visual aesthetic. Take our tour to see the city's best churches.
How it works: Download the app "GPSmyCity: Walks in 1K+ Cities" from iTunes App Store or Google Play to your mobile phone or tablet. The app turns your mobile device into a personal tour guide and its built-in GPS navigation functions guide you from one tour stop to next. The app works offline, so no data plan is needed when traveling abroad.

The Korean Second Presbyterian Church is an interesting example of a modernist religious building. Constructed in 1961, its facade features sunshades and a minimalistic structure that was typical of the period. An affiliate of the Korean Presbyterian Church of Miami, the church serves the Korean community of Fort Lauderdale and surrounding areas.
Image by mattypantaloons on Flickr under Creative Commons License.
2

The First Congregational Church is another example of modern religious architecture in Fort Lauderdale. Built in the early 1960s, this church's imposing triangular roof is rather eye-catching, while typical of northern architecture, it's an unusual sight in sunny Florida. The Church also functions as a community center for charity programs and events.
Image by tombarnes20008 on Flickr under Creative Commons License.
3

Established in the 1980s, the Saint Thomas Malankara Orthodox Church is a community church serving a parish of around 40 families from India. The church seeks to preserve within this community the traditions of the Indian Orthodox Church, which has its roots in Syrian Christianity.
Image by Diganta Talukdar on Flickr under Creative Commons License.
4

4) Shepherd of the Coast Lutheran Church

Although one of the newest churches in the city, the Shepherd of the Coast Lutheran Church has already become the largest congregation of Lutherans in the area. Built in 2004, this modern minimalistic structure nonetheless features some flamboyant aspects traditional to older Lutheran churches. The church is also affiliated with a Lutheran school that is a major educational center for the community.
Image by Fairlight60 on Flickr under Creative Commons License.
5

Beginning in 1978 under pastor D. James Kennedy, the church's weekly services were televised as the Coral Ridge Hour, eventually reaching a nationwide audience of more than 3 million. Production of new broadcasts from the church were discontinued in 2007 after Kennedy's passing, although reruns of Kennedy's sermons continue to air on some networks.

Image by Infrogmation on Wikimedia under Creative Commons License.
Sight description based on wikipedia