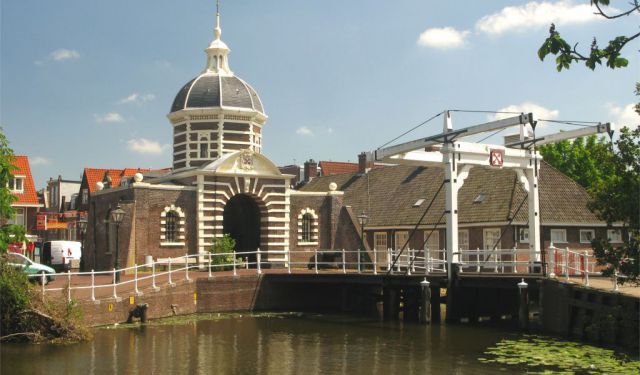 Image by Erik Zachte on Wikimedia under Creative Commons License.

Churches in Leiden (Self Guided), Leiden

Leiden is very rich in beautiful religious edifices. Old and modern churches, Catholic, Orthodox, Protestant and Muslim temples and worship places build the great heritage of creative construction, delicate painting and adventurous designs. This guide is dedicated to most notorious, old, unusual and special buildings.
How it works: Download the app "GPSmyCity: Walks in 1K+ Cities" from iTunes App Store or Google Play to your mobile phone or tablet. The app turns your mobile device into a personal tour guide and its built-in GPS navigation functions guide you from one tour stop to next. The app works offline, so no data plan is needed when traveling abroad.

The Marekerk is a Protestant church in Leiden, located at the Lange Mare and the Oude Vest canal. The church can be easily seen from the Oude Vest and the Burcht van Leiden by its round dome. The church was designed by the city architect Arent van ’s-Gravesande in 1639-1649, who also designed the Bibliotheca Thysiana on Rapenburg 25. It was opened in 1649. The main entrance was designed by Jacob van Campen in 1659. The organ was built around 1560 for the choir of the Pieterskerk and it was moved to the Marekerk in 1733 and enlarged. Entrance was restored in 1966. The church today has services on Sunday and is open to visitors during the week.
Image by Vysotsky on Wikimedia under Creative Commons License.
Sight description based on wikipedia
2

Hartebrug is a Catholic church with a very high tower and very warm, pleasant and comfortable interior. The basic style used in architecture and design is Gothic, although there is some Tudor style and early Renaissance influence. The unusual peach and pale orange colours of the interior walls give a slight sensation of home and summer. The roof is in the shape of a half tube, and the columns have Corinthian capitals.
Image by Robbiedoes on Wikimedia under Creative Commons License.
3

Waalse Church is one of the oldest edifices in Leiden. It was built in 1275 and the chapel was enlarged in 1635. Other major changes happened between 1737 and 1739, when the tower and the façade of the church were renewed and several Gothic style decorations were added. The red brick construction is a single-floored, arched church and the walls are decorated with bas-relief sculptures, also in a Gothic manner. Services are held in French.
Image by Rudolphous on Wikimedia under Creative Commons License.
4

Lokhorstkerk is famous for its Johannes Mitterreither organ, which was installed in 1774. The edifice was built between 1613 and 1638, and it is still active. Nowadays the church is used by Mennonites and Remonstrants, two congregations that were formed by Jacobus Arminius in 1619. The building has a very simple style, with a sober wooden door with a semi-rosette and a full rosette above the entrance. The classic colour mix of wine red, white and black make it look very elegant.
Image by Kattenkruid on Wikimedia under Creative Commons License.
5

The Pieterskerk is a late-Gothic church in Leiden dedicated to Saint Peter. It is best known today as the church of the Pilgrim Fathers where John Robinson was buried. In around 1100 the site held the county chapel of the counts of Holland, rebuilt in 1121. The present building took approximately 180 years to build, starting in 1390. Famous Leiden dignitaries are buried there, including the painter Jan Steen and the Leiden professor Herman Boerhaave.

The beautiful stained glass windows already took a terrible blow during the Beeldenstorm, but somewhat more than a century later were completely destroyed in the gunpowder explosion of January 12, 1807. The windows were boarded up, and it wasn't until 1880 that a large-scale restoration took place. During multiple restorations a lot of discoveries were made, they are on permanent display in the church. A mummy is also on display, it was decided not to make it a subject of a scientific scrutiny. Though the windows have been lost, the various grave monuments by prominent Leiden sculptors can still be seen. The building is open to the public.

Image by Keykeycompany on Wikimedia under Creative Commons License.
Sight description based on wikipedia
6

St. Louis church (or just Louis church) is a Roman Catholic church. Both the tower and the church are state monuments. In the place of the present church there was the chapel of the St. Jacob Hospital founded in 1477 and dedicated to Saint Jacob. The Chapel and hospital were sold in 1547 to the parish of St. Peter's Church and then in 1567 to the city of Leiden. The facade of the church dates from 1538, the tower from 1594 and the bells from 1598.
Image by Tubantia on Wikimedia under Creative Commons License.
7

The edifice was built out of bricks more than 5 centuries ago, at the beginning of the 15th century and the design used has several Gothic elements. Hooglandse Kerk is dedicated to St. Pancras and today is a church used by the Protestant community of the Netherlands. The sanctuary was finished in 1391 and the ambulatory, in 1415. The whole church is white inside, giving the impression of heaven on earth. It is very high and large, with a lot of light, Corinthian columns and an arched roof. It is considered one of the most beautiful buildings in Leiden.
Image by Edi Weissmann on Wikimedia under Creative Commons License.
8

The Lutheran Church of Leiden, also called The Sexton's house, was designed by J.W. Schaap in 1861. It is a little white building with a very distinct green roof. The windows have Baroque elements of decoration, giving the edifice some elegance. This place is always open for visitors and is a great and quiet place for a prayer or just a visit.
Image by Goodness Shamrock on Wikimedia under Creative Commons License.

Create Your Own Walk in Leiden

Creating your own self-guided walk in Leiden is easy and fun. Choose the city attractions that you want to see and a walk route map will be created just for you. You can even set your hotel as the start point of the walk.

Most of the people who go for a vacation abroad are families, usually with children. Of course, this tour is also great for young playful couples or couples who just miss their early years. Those who have kids - watch out! This is going to be a hot day; you will be exploring and learning, playing and eating tasty meals with your young travelers!

Even from the first glance it is clear - Leiden is the city of nice buildings, glorious edifices and wonderful architecture. To help you see the best of the best, we created this particular guide. It will lead you to old and modern buildings, dedicated to social service, science and religion. The places are of true interest for the whole family with any work specialty or hobby.

The city of Leiden is a very old city that dates back to the 4th century, when one of its first fortresses was built by the Romans. Through history, Leiden had a lot of struggles and sieges. It has always been a remarkable city in every field. As proof, we shall guide you to the most important, unusual, amazing and large museums that Leiden offers. Nature, science, art and history - all these...  view more

When it comes to secrets and exceptionally beautiful places, the Dutch city of Leiden is second to none. Some of the local streets haven't change much of their appearance and character for centuries. When in Leiden, watch your steps as you might follow, quite literally, in the footsteps of great Rembrandt himself. This orientation walk is set to reveal to you some of the local secrets and the...  view more