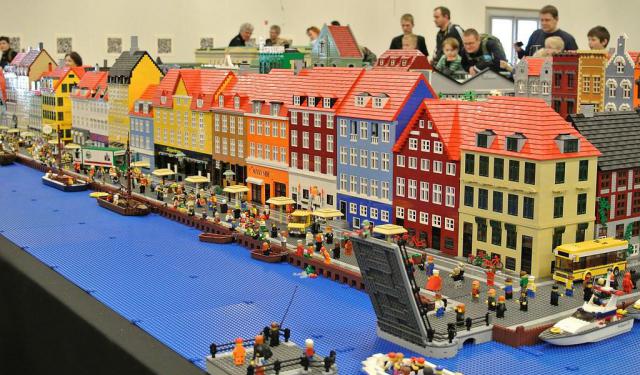 Image by Brickset on Flickr under Creative Commons License.

It would be a pity to leave Copenhagen without having explored its specialty shops and bringing home something truly original. We've compiled a list of shops where one can find authentic Danish products which are unique to Copenhagen and Denmark. Follow this self guided shopping tour to hunt for that perfect trip momento.
How it works: Download the app "GPSmyCity: Walks in 1K+ Cities" from iTunes App Store or Google Play to your mobile phone or tablet. The app turns your mobile device into a personal tour guide and its built-in GPS navigation functions guide you from one tour stop to next. The app works offline, so no data plan is needed when traveling abroad.

Who has not at some point played with LEGO toy building bricks as a child? The popular Danish plastic toy was introduced in 1947 by founder Ole Kirk Christiansen. The name LEGO comes from the Danish words leg godt, meaning play well.

The original toy building bricks were just the start. Later, in 1969, came Duplo building bricks, a series of simple blocks twice as big as the original and aimed at young children. LEGO also produces plastic figures, merchandise and themed sets often with a macho theme, like Star Wars, Indiana Jones, Toy Story, Batman, Cars, Pirates of the Caribbean, Avatar, Spider Man and so on.

LEGO has a massive following and subculture of movies, games, magazines, clothing line and of course theme parks. The original LEGOLAND is located in the town of Billund in Denmark. LEGO toys come in many variations with a starting price as little as $5. If you are Copenhagen, you should not miss the opportunity to visit the world of LEGO in its brand new flagship store.

Image by Leif Jørgensen on Wikimedia under Creative Commons License.
2

Georg Jensen was established in 1904 by silver smith and sculptor Georg Jensen. Georg Jensen is known for his artistic boldness and superior craftsmanship. When Georg Jensen died in 1935, The Times wrote in its obituary that Georg Jensen's work would be the antiques of the future. This predicition has since become true.

Georg Jensen left a legacy of some of the finest Scandinavian designs when it comes to gold, silver and platinum jewelry, cutlery, watches and home articles. Today the brand Georg Jensen is synonymous with unique design, excellent craftsmanship and quality. Georg Jensen is purveyor to the royal Danish court.

If you can bring only one item home from your trip to Copenhagen, bring a piece of Royal Copenhagen’s Blue Fluted Mega dinnerware. The original Blue Fluted design dates back to 1775. But about a decade ago a young artist named Karen Kjældgaard-Larsen had the courage to twist and modernize the old classic into a new one, simply by enlarging the flowers. The design is now a bestseller.

The dinnerware collectives cost from $45-675. The cup and saucer on the photo come at the price of $130. The design also comes in black and is of course called Black Fluted Mega. You will find it in the Royal Copenhagen Flagship Store, where the most famous dinnerware is Flora Danica, dating back to the 1700s, where it was a gift from royalty to royalty. The collection is one of the most prestigious in the world and costs a fortune. The cheapest item, a plate, costs no less than $ 1,065! The porcelain collection was presented to Danish Crown Prince Frederik and Crown Princess Mary as a wedding gift in 2004. Royal Copenhagen designs are some of the best examples of history and tradition keeping up with modern times.

Hay House is a store that sells innovative Danish design classics, mainly furniture, but also smaller interior designer accessories and toys. What unique about the Hay House toy collection is that the toys are wooden quality toys, like play shapes, a dumper truck, a flute, cutting circles, and shape makers, inspired by the 1950’s and 1960’s, which will surely make you nostalgic.

You can also find knitted teddy bears, knitted cupcakes and doughnuts, owl purses for a little girl, wooden colt and rifle for a little boy as well as a little backpack and finger puppets. And why not invest in a curiosity box to keep it all in while you are at it? Prices range from $15-145. Hay House is one of modern times most successful Danish design companies if you are counting international appeal. Hay House is located at Strøget pedestrian shopping street, in central Copenhagen.

A statue of The Little Mermaid sits in the harbor of Copenhagen. It is for many synonymous with Copenhagen and thus a miniature statue or figurine is a popular gift or souvenir to take home from a visit in the Danish capital. You will find many different kinds, made of plastic or porcelain.

In Copenhagen Souvenir Shop you can find a nice bronze-colored one made of plastic, which costs around $25, or one made of porcelain, which costs around $50. The original statue was donated to the City of Copenhagen by brewer Carl Jacobsen - son of the founder of Carlsberg beer. Its creator sculptor Edvard Eriksen was inspired by the fairytale of The Little Mermaid by Danish author and poet Hans Christian Andersen, and then used a ballerina and his wife Eline Eriksen as models.

A well-established Danish chain of department stores, Magasin du Nord traces its roots back to 1868 when Theodor Wessel and Emil Vett opened a draper's shop in Aarhus. It was an immediate success and two years later the company opened a shop in Copenhagen in rented rooms of the mondain Hotel du Nord. As the department store came to occupy a large part of the hotel, the company adopted the name after it in 1879. By 1889, Magasin du Nord had taken over the entire hotel and proceeded to demolish it together with a neighbouring structure. Completed in 1894 in a French Renaissance Revival style, the current building became the most beautiful department store of its day – a place where modern man could be awestruck by everything the great wide world had to offer. Inspiration came from all corners of the globe, and the goods from Paris, Berlin and London, as well as Copenhagen's own illustrious fabric and furniture factories.

Magasin du Nord continues to offer great shopping stores and good quality products to this day. Each of the five floors have their men's, women's and children's department while the rest is taken up by kitchen accessories, home decors, computers and gadgets, sports and luggages, etc. On the ground floor most displays feature perfumes, beauty brand products and designer brands bags, and you'll find two spot places of Joe & The Juice. The underground is where you'll find the food market, a selection of great wines, sport magazines, flowers, chocolates and cake-coffee shops.

***HANS CHRISTIAN ANDERSEN'S COPENHAGEN***
Go and have a look at the attic room that 22-year-old Andersen rented from 1827 to 1828 and where he scribbled some of his poems. You gain entrance through the store and it is situated on the third floor, where you will see a picture of the famous former tenant's distinctive face on the wall. Continue down the hallway and through a meeting room until you see the attic room on your right. There are not a lot of bells and whistles inside, but the tiny space surely exudes a certain poignancy. Entrance is free and opening hours are Thu/Fri: 1–5pm; Sat/Sun: 11am–3pm.

Selecting amber for jewelry production is a skill that requires technical knowledge and experience. House of Amber has 78 years of it, and Copenhagen Amber Museum, located in the same old historic building in Nyhavn, Copenhagen’s New Harbor, guarantees the quality of each piece of jewelry. Prices usually start at $60 for a small amber stone and go up to $1,000’s according to the piece of jewelry.

“Designed by nature - Refined by us” is the motto of the House of Amber in Copenhagen. The history of amber began 20 – 50 million years ago, when resin from large prehistoric pine trees was swept into the ocean, and the fluid became what we today know as amber or “Nordic gold”. It is one of the first materials used by man for making jewelry. The first discovery of amber jewelry dates back to 10,000 BC.