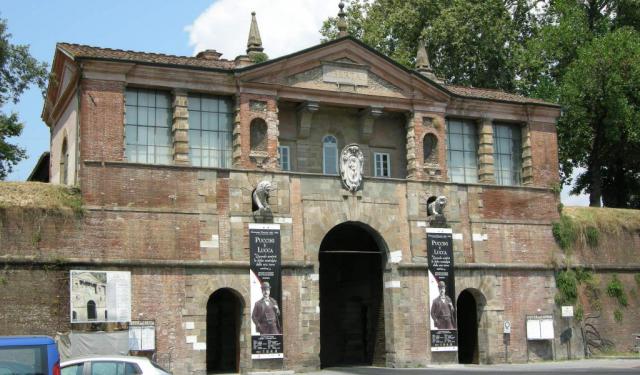 Image by echiner1 on Flickr under Creative Commons License.

The gateways in Lucca were established in special parts of the city as they all contribute to an equally imposing architectural construction in an attractive style. They allowed entrance into the city while making it safer. Take this tour guide to explore some of the most magnificent Medieval architectural structures of Lucca.
How it works: Download the app "GPSmyCity: Walks in 1K+ Cities" from iTunes App Store or Google Play to your mobile phone or tablet. The app turns your mobile device into a personal tour guide and its built-in GPS navigation functions guide you from one tour stop to next. The app works offline, so no data plan is needed when traveling abroad.

The Porta dei Borghi is an old gateway of Lucca’s Medieval period. This gateway is located on the north side and was built between 1198 and 1265. The Porta dei Borghi is the oldest part of the walls of Lucca. There is a single central opening with two towers on either side. Both towers are currently used as private homes. On the interior there is an ancient fresco, framed by a bezel, showing the Madonna and Her child. This part of the gateway was restored in 2008 by the citizens of Lucca.
Image by ErrorTribune on Flickr under Creative Commons License.
2

The Porta Santa Maria is a gateway of the walls of Lucca which is located on the north. It was established between 1549 and 1592 and is part of the Renaissance walls. It was designed by architect Cinese Bresciani and built by Michelangelo Gabrielli. The Porta Santa Maria is dedicated to the Virgin Mary and it has a marble statue of the Madonna placed in a niche at the entrance. Originally, the gateway had a single entrance, and only later were the other two openings created. On both sides of the gateway there are some statues representing a panther which is the symbol of the city. Today, the central entrance is used as a walkway, while the side openings are used as a passage for transit vehicles in the city.
Image by Davide Papalini on Wikimedia under Creative Commons License.
3

The Porta San Jacopo is a gateway of the walls of Lucca located on the north side of the city. It is one of the newest gateways in the walls of Lucca since it was founded in 1930. It is characterized by a single entrance which, since the twentieth century, was mostly used by the intensifying flow of traffic.
Image by M@rcello;-) on Flickr under Creative Commons License.
4

The Porta Elisa is a gateway in the walls of Lucca located on the east side of the city. It was named after Elisa Bonaparte Baciocchi. The original design of the walls of Lucca did not include any portals on the east side of the wall. During the Napoleonic domination, because of the threat of invasion from Florence, it became very necessary to obtain direct access to the street that led to the important cities of the state such as Capannori Lucca, Altoona, Monaco, Montecatini, Pistoia and Florence. The Porta Elisa was established between 1809 and 1811. The entrance consists of three tubes with a modest ornamentation of Neoclassical style with Doric entablature supported by two pairs of Tuscan columns. The walls of white marble stand strongly on the red bricks that make up the wall hangings.
Image by sailko on Wikimedia under Creative Commons License.
5

The Porta San Gervasio is a gateway of the ancient walls of Lucca located at one end of Via Fillungo, which was almost completely demolished by the construction of the Renaissance walls. The Porta San Gervasio, also known as the Annunciation, was completed in 1255. The entrance has a large opening, eight meters high, and covered with an arch in the inner bezel can be seen the image of Madonna and Her Child with two saints. The two towers made of grey sandstone are ornamented with white limestone battlements. Now the two towers are used for private homes. The gateway was restored in 2006 and 2007.
Image by sailko on Wikimedia under Creative Commons License.
6

The Porta San Pietro is a gateway of the walls of Lucca located in the south part of the city. It was established between 1565 and 1566 and is a part of the Renaissance walls. It was designed by Alessandro Resta. The Porta San Pietro consists of three entrances and there is an emblem of St. Peter in the centre with the word “libertas”. On both sides there are two lions. Nowadays, the side doors are used for pedestrians, while the central one is for traffic.
Image by sailko on Wikimedia under Creative Commons License.
7

The Porta Sant'Anna, officially called Porta Vittorio Emanuele, is one of the gates in the walls of Lucca. It was named after St. Anne's Church, which is located outside the walls. As Porta San Donato was completed in the seventeenth century for defensive reasons and was not adequate for the needs of motorized traffic, the Porta Sant’Anna was built in 1910 to facilitate the traffic exit and entry on the west side of the city. There are two central entrances used for traffic and another two used for pedestrians.
Image by sailko on Wikimedia under Creative Commons License.
8

The Antica Porta San Donato is a gateway of the ancient walls of Lucca located on the west side of the city. It was established in 1590 and remained in operation for about 50 years. After that it was replaced by the new Porta San Donato which was built between 1629 and 1639. It is located within the existing walls of Lucca, in Piazzale Verdi.
Image by sailko on Wikimedia under Creative Commons License.
9