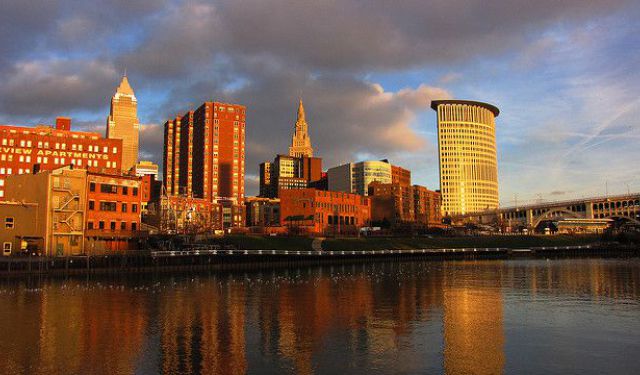 Image by Christina Spicuzza on Flickr under Creative Commons License.

Downtown Cleveland holds a number of impressive landmarks of cultural, historic and national importance. Among them one of the U.S first shopping malls; some of the country's highest skyscrapers, such as the Key Tower; the Rock and Roll Hall of Fame; the Great Lakes Science Center, and many others. To see them all in one go, follow this orientation walk and make the most of your time in Downtown Cleveland.
How it works: Download the app "GPSmyCity: Walks in 1K+ Cities" from iTunes App Store or Google Play to your mobile phone or tablet. The app turns your mobile device into a personal tour guide and its built-in GPS navigation functions guide you from one tour stop to next. The app works offline, so no data plan is needed when traveling abroad.

Public Square, downtown Cleveland’s central plaza, takes up four city blocks. Cleveland's three tallest buildings, Key Tower, the BP Tower and the Terminal Tower, face the square. Public Square was part of the Connecticut Land Company's original plan for the city, which were overseen by Moses Cleaveland in the 1790s. The square is signature of the layout for early New England towns, which Cleveland was modeled after. While it initially served as a common pasture for settlers' animals, Public Square was the height of modernity in 1879 when it became the first street in the world to be lit with electric street lights, arc lamps designed by Cleveland native Charles F. Brush. The square was added to the National Register of Historic Places on December 18, 1975.

Image by Center for Neighborhood Technology on Flickr under Creative Commons License.
Sight description based on wikipedia
2

The Terminal Tower is a landmark skyscraper located on Public Square in downtown Cleveland. It was built during the skyscraper boom of the 1920s and 1930s, and was the second-tallest building in the world when completed. It served as an office building atop the new rail station, Union Terminal. Designed by the firm of Graham, Anderson, Probst & White, the Terminal Tower opened in 1928, two years before the Union Terminal complex was complete, and would remain the tallest building in the world outside of New York City until the main building of Moscow State University in Moscow was built in 1953. The Terminal Tower would continue to be the tallest building in North America outside of New York City until the Prudential Center in Boston, Massachusetts was completed in 1964.

Image by Lisa Chamberlain on Wikimedia under Creative Commons License.
Sight description based on wikipedia
3

The Old Stone Church, an historic Presbyterian church located in downtown Cleveland, is the oldest building on Public Square. It is also the second church built within the city limits. The Old Stone Church has stood virtually unchanged to this day, and is the last remaining church designed by the Heard and Porter architectural firm. The only major modification was the 1998 addition of a steeple that replicated the original, part of a $2.4 million renovation project, which also included cleaning the Berea sandstone (which had turned black from air pollution) and conservation of the La Farge window. The Old Stone Church was added to the National Register of Historic Places in 1973.

Image by Confiteordeo on Wikimedia under Creative Commons License.
Sight description based on wikipedia
4

Key Tower is a skyscraper on Public Square in downtown Cleveland designed by architect César Pelli. It is the tallest building in both the city and the state, the 18th tallest building in the United States and the 59th tallest building in the world. The top of the spire is the highest man-made point in Ohio. This 57-story building reaches 948 feet to the top of its spire, and it can be visible up to twenty miles away. It was originally built as the Society Center but was renamed when Key Bank acquired Society Bank. Society had recently acquired Ameritrust and canceled plans for an even taller building on Public Square. Key Tower was developed by the Richard E. Jacobs Group and is owned by Wells Real Estate Funds. Key Bank's headquarters occupy most of the tower.

Large numbers of Catholics started to arrive in the Western Reserve region of Ohio in the 1830s and were served by visiting priests sent north by the Archdiocese of Cincinnati. A small group of Irish settlers established St. Mary's of the Flats in 1826. The congregation met in several locations before beginning construction on its own sanctuary in 1837.

Bishop Rappe established St. John's Cathedral on Superior Street and Erie Street on land purchased in 1845 by St. Mary's pastor Rev. Peter McLaughlin. He selected architect Patrick Keely, who designed the building in an ornamental Gothic style and the Bishop laid the cornerstone October 22, 1848. Until the new building was completed in 1852, St. Mary's served as cathedral for the diocese. At the time of its completion, the new cathedral was the well beyond Cleveland's Public Square.

Free Stamp, an outdoor sculpture located in Willard Park created by Claes Oldenburg and Coosje van Bruggen, has been called "the world's largest rubber stamp." The sculpture depicts a rubber stamp of the word "FREE." Work was commissioned by Standard Oil of Ohio (Sohio) in 1985 for display at its soon-to-be-constructed headquarters on Public Square, which became the BP Tower. The piece was originally designed to stand upright, with the lettering of the stamp hidden from view. According to one of the executives working with Oldenburg, the message on the stamp was intended as a reference to the Civil War-era Soldiers' and Sailors' Monument located across the street.

The Cleveland Mall is a long public park in downtown Cleveland. It was conceived as part of the 1903 Group Plan by Daniel Burnham, John Carrère, and Arnold Brunner as a vast public space flanked by the city's major civic and governmental buildings, all built in the neoclassical style. In the spirit of the City Beautiful movement, formerly seedy areas were transformed into a "magnificent civic center", which was supposed to be crowned by the Union Terminal at the north end of the mall, on the shores of Lake Erie. The Mall was added to the National Register of Historic Places in 1975, and the Cleveland Restoration Society is pursuing a National Historic Landmark designation.

The Mall is divided into three sections, known as Malls A, B, and C. Mall A, the southernmost, is officially named Veterans' Memorial Plaza, and Mall C was dedicated as Strawbridge Plaza in 2003. The Memorial Plaza, which borders St. Clair Avenue, is the site of the Fountain of Eternal Life, also known as the War Memorial Fountain. The Cleveland Convention Center is underneath Malls B and C, and plans to extend the center north are under consideration as part of the Cleveland City Planning Commission's efforts to renovate or replace the existing facility. In January 2009, part of the mall was proposed to be the site of a medical mart.

The Cuyahoga County Courthouse stretches along Lakeside Boulevard at the north end of the Cleveland Mall downtown. It was listed on the National Register of Historic Places along with the mall district in 1975. Constructed from 1906 to 1912 by the architectural firm of Lehman & Schmitt, this Beaux Arts style building is constructed of Milford pink granite from Massachusetts. The rusticated masonry of the ground floor includes deeply recessed arched windows and doors. A protruding keystone tops each one. The front entrance is flanked by bronze statues of Thomas Jefferson and Alexander Hamilton, sculpted by Karl Bitter.

The Great Lakes Science Center is a museum and educational facility in downtown Cleveland. It's exhibits focus on helping visitors to understand science, technology, and their interdependence with the environment. Many of the exhibits document the features of the natural environment in the Great Lakes region of the United States. The facility includes signature and traveling exhibits, meeting space, a restaurant, and an Omnimax theater.

The museum opened in July 1996. The center's signature exhibits concentrate in three major areas: Great Lakes environment, technology, and science phenomenon. During the 2005/2006 school year, a new Outreach program made its debut, and Great Summer Science, the museum's summer science camps, started summer 2006. Also during the summer 2006, the Science Center installed a wind turbine in its front yard. The Science Center estimates the turbine would provide around 7% of the Center's power. In Summer 2007 they also completed the installation of a 156 panel solar array forming a semicircle at the entrance of the Science Center.

The Rock and Roll Hall of Fame and Museum is a museum located on the shore of Lake Erie in downtown Cleveland. It is dedicated to archiving the history of some of the best-known and most influential artists, producers, engineers and others who have, in some major way, influenced the music industry through the genre of rock music. The museum is part of the city's redeveloped North Coast Harbor.

The Rock and Roll Hall of Fame Foundation was created April 20, 1983. There are seven levels in the building. The first through fifth levels feature many permanent and temporary exhibits documenting the history of rock and roll. Temporary exhibits display items from artists that have only been borrowed for a short period of time, such as the Warped Tour display in 2007, showcasing memorabilia from the tour's 12 years in existence. The museum has also put up numerous musical films for viewing, such as 2007's temporary exhibit running George Harrison's Concert for Bangladesh. Some of the permanent exhibits include a history of audio technology, a section of mannequins donning outfits of famous performers past and present, and an area which looks at music scenes in various cities throughout different eras, including Memphis in the 50s, Detroit, Liverpool and San Francisco in the 60s, Los Angeles in the 70s, New York City and London in the 70s and 80s and Seattle in the 90s.

The Steamship William G. Mather is a retired Great Lakes bulk freighter now restored as a museum ship, one of four in the Great Lakes region. It once transported cargo such as ore, coal, stone and grain to ports throughout the Great Lakes, and was nicknamed "The Ship That Built Cleveland" due to frequent stops at Cleveland's steel mills. Built as the flagship for the Cleveland-Cliffs Iron Company and named in honor of the company president at the time, William Gwinn Mather, on July 30, 1995 it was dedicated as an American Society of Mechanical Engineers National Historic Mechanical Engineering Landmark.