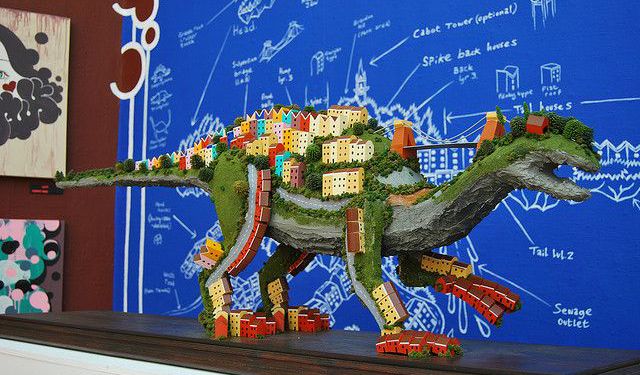 Image by Peak Maths on Flickr under Creative Commons License.

Bristol has a wide variety of attractions not only for grown-ups but also for children. It has zoos, museums and soft play areas for toddlers and other amazing venues worth visiting. Take this tour to visit the best in entertainment for children in Bristol.
How it works: Download the app "GPSmyCity: Walks in 1K+ Cities" from iTunes App Store or Google Play to your mobile phone or tablet. The app turns your mobile device into a personal tour guide and its built-in GPS navigation functions guide you from one tour stop to next. The app works offline, so no data plan is needed when traveling abroad.

Bristol Zoo is a zoo in the city of Bristol in South West England. The zoo's stated mission is "Bristol Zoo Gardens maintains and defends biodiversity through breeding endangered species, conserving threatened species and habitats and promoting a wider understanding of the natural world". Opened in 1836 by the Bristol, Clifton and West of England Zoological Society, Bristol Zoo is the world's oldest provincial zoo. It is a Victorian walled zoo located between Clifton Down and Clifton College, near Brunel's Clifton Suspension Bridge; it covers a small area by modern standards, but with a considerable number of species. Bristol Zoo houses 300 different species of animals and wildlife and is a very popular attraction for kids. It was awarded Zoo of the Year in 2004 by the Good Britain Guide and is considered the fifth oldest zoo in the world. In the 1960s the zoo came to national prominence by appearing in the UK television series, Animal Magic, hosted by the comic animal 'communicator', Johnny Morris. Morris would play keeper and voice all the animals there.
Image by Adrian Pingstone on Wikimedia under Creative Commons License.
Sight description based on wikipedia
2

2) Clifton Observatory and Caves (must see)

The Observatory is a former mill, now used as an observatory, located on Clifton Down, close to the Clifton Suspension Bridge. At 337 feet above the gorge, the cliff top is likely to have been used as a lookout post since at least the Iron Age. The building was erected with the permission of the Society of Merchant Venturers, as a windmill for corn in 1766 and later converted to the grinding of snuff, when it became known as 'The Snuff Mill'.

This was damaged by a fire on October 30, 1777, when the sails were left turning during a gale and caused the equipment to catch light. It was then derelict for 52 years until in 1828 William West, an artist, rented the old mill, for 5 shillings a year, as a studio. In 1977, the Merchant Venturers sold the observatory to Honorbrook Inns, however they were obliged to maintain public access to the camera obscura whose ownership was retained by the Merchant Venturers. West built a tunnel from the Observatory to St Vincent's Cave (also known as Ghyston's Cave or Giant's Cave), which opens onto St Vincent's Rocks on the cliff face, 250 feet above the floor of the Avon gorge and 90 feet below the cliff top. The tunnel which is 2,000 feet long, and first opened to the public in 1837. This cave was first mentioned as being a chapel in the year A.D. 305 and excavations, in which Romano-British pottery has been found, have revealed that it has been both a holy place and a place of refuge at various times in its history.

Image by Rbrwr on Wikimedia under Creative Commons License.
Sight description based on wikipedia
3

3) The Clifton Suspension Bridge (must see)

The Clifton Suspension Bridge is a suspension bridge spanning the Avon Gorge, and linking Clifton in Bristol to Leigh Woods in North Somerset. Designed by Isambard Kingdom Brunel, it is a landmark that is used as a symbol of Bristol. The idea of building a bridge across the Avon Gorge originated in 1753 originally for a stone bridge with later plans for a cast iron structure. An attempt to build Brunel's design in 1831 was stopped by the Bristol Riots, and the revised version of his designs was built after his death, being completed in 1864. Although similar in size, the bridge towers are not identical in design, the Clifton tower having side cut-outs, the Leigh tower more pointed arches atop a 110 feet red sandstone clad abutment. Roller mounted "saddles" at the top of each tower allow movement of the three independent wrought iron chains on each side when loads pass over the bridge. The bridge deck is suspended by eighty-one matching vertical wrought-iron rods. Two men were killed during the construction of the bridge; since opening it had a reputation as a suicide bridge. It now has plaques that advertise the telephone number of The Samaritans and has anti-climb barriers above the railings on the bridge.
Image by Cako on Wikimedia under Creative Commons License.
Sight description based on wikipedia
4

Goldney Hall also known as Goldney House is a self-catered hall of residence in Clifton, Bristol, one of three in the area providing accommodation for students at the University of Bristol. The current Goldney House house was built in 1724, is a listed building and occupies a hilltop position overlooking the city of Bristol and Brandon Hill. The landscape garden is used for weddings and receptions. The main house is a Grade II listed building. Other facilities in the main house include a Bar, library, common room and dark room. The house also contains an ornate mahogany parlor complete with original wooden paneling dating back to 1725 which is reserved for meetings and special events.
Image by Francium12 on Wikimedia under Creative Commons License.
5

Cabot Tower is a tower in Bristol, situated in a public park on Brandon Hill, between the city center, Clifton and Hotwells. It was constructed in memory of John Cabot, 400 years after he set sail in the Matthew from Bristol and landed in what was later to become Canada. The foundation stone was laid on 24 June 1897 and the tower was completed in July 1898.

The architect was William Venn Gough and it was built by Love and Waite of Bristol. It consists of a spiral staircase and two viewing platforms which overlook the city, the higher of which is approximately 334 feet (102 m) above sea level. The tower gives its name to the area and Council ward of Cabot. The tower is 105 feet (32 m) high and built from red sandstone with cream Bath Stone for ornamentation and emphasis, and was paid for by public subscription. On three sides of the tower are commemorative plaques. After closure to the public in 2007, the tower reopened on 16 August 2011 following completion of repair works costing an estimated £420,000 to cracked stonework, caused by corroded reinforcing steel in the floor of the viewing platform, which had made the tower unsafe. Planning consent for the repairs was granted by Bristol City Council in November 2010.

Image by Arpingstone on Wikimedia under Creative Commons License.
Sight description based on wikipedia
6

The Cathedral Church of the Holy and Undivided Trinity is the Church of England cathedral in the city of Bristol, England, and is commonly known as Bristol Cathedral. Founded in 1140, it became the seat of the bishop and cathedral of the new Diocese of Bristol in 1542. Located on College Green, across which its architecture can be seen to advantage, the cathedral presents a harmonious view of tall Gothic windows and pinnacled skyline that belies the fact that it was constructed over a period of more than 700 years. The cathedral has much of interest including unique architectural features, unusual memorials and an historic organ.
Image by NotFromUtrecht on Wikimedia under Creative Commons License.
Sight description based on wikipedia
7

We The Curious is "an idea and a place for everybody", and its aim is "to create a culture of curiosity". It features over 250 interactive exhibits over two floors, and members of the public and school groups can also engage with the Live Science Team over programming in the kitchen, studio and on live lab. The place was recently renovated and quite a lot of new facilities were added, so there is something there to capture every imagination. Add in a cafe with lots of seating places, as well as an indoor picnic area if you'd rather bring your own food.

We The Curious is also home of the UK's first 3D planetarium, hosting 30-minute shows that are highly recommended for science and astronomy enthusiasts, as well as families and groups of friends for a unique night out.

Image by Nick Bramhall on Flickr under Creative Commons License.
8

In April 2008 it was announced that Blue Reef had signed a lease for the Wildwalk and IMAX buildings on the At-Bristol site which opened in November 2009. Home to over 40 living displays from tropical sharks and lobsters to seahorses and tropical fish. At the Aquarium’s heart is a large ocean tank where an underwater walkthrough tunnel offers close encounters with the tropical coral reef fish. Other displays are home to giant Pacific octopus, trigger fish, nautilus, cuttlefish, turtles and terrapins.