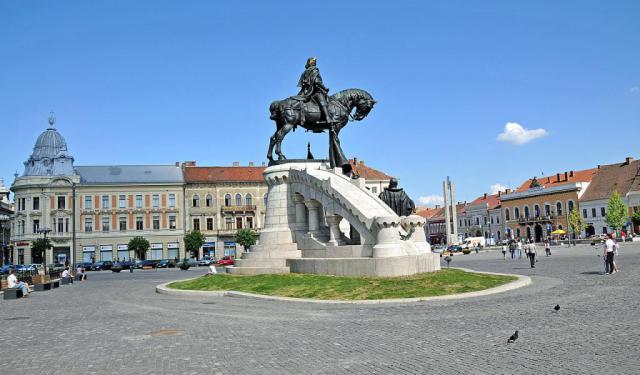 Image by Dennis Jarvis on Wikimedia under Creative Commons License.

In Cluj-Napoca, the centuries have given us a number of significant monuments that impart the city's history. Each of these features impressive structural design and each shares its own story. Take this walking tour to discover the most notable monuments in Cluj-Napoca.
How it works: Download the app "GPSmyCity: Walks in 1K+ Cities" from iTunes App Store or Google Play to your mobile phone or tablet. The app turns your mobile device into a personal tour guide and its built-in GPS navigation functions guide you from one tour stop to next. The app works offline, so no data plan is needed when traveling abroad.

1) Statue of Michael the Brave

The Carolina Obelisk, which is situated in Museum Square, is a deep-rooted lay monument in Cluj-Napoca. It was constructed in 1831 to honor the stay of the royal couple Emperor Francis I and Carolina Augusta in 1817. The Carolina Obelisk’s height is 10 m, and its four facade bas-reliefs depict some moments from the imperial visit.
Image by Cluj Kolozsvár Klausenburg on Flickr under Creative Commons License.
3

The Capitoline Wolf Statue in Cluj-Napoca is located on Eroilor Boulevard, in the city centre on the banks of the Someşul Mic river. After the Great Union of 1 December 1918, the University of Upper Dacia was organised at Cluj, ultimately being renamed King Ferdinand I University. It was officially opened on 1 February 1920 in the presence of King Ferdinand and the royal family. The following year, the Italian state made a gift to Romania of five copies of the Capitoline Wolf. One copy was sent to Bucharest, to be installed in Roman Square, a second one to Cluj, a third to Chişinău, a fourth to Timişoara and a fifth to Târgu-Mureş. The statues symbolised the unity of Romanians from all parts of the country. The Cluj-Napoca monument, brought to Cluj by a delegation of 200 Italians (mostly students) is a faithful copy of the Capitoline Wolf, with Romulus and Remus beneath her.
Image by Cluj Napoca on Wikimedia under Creative Commons License.
Sight description based on wikipedia
5

The Ardelean School Statuary Group is a work by sculptor Romulus Ladea, created in 1973. The monument represents three leaders of the Ardelean School movement, initiated by the Romanian Transylvanian intelligentsia. The personalities represented are Samuil Micu, Gheorghe Sincai and Petru Major.
Image by Istvánka on Wikimedia under Creative Commons License.
6

The Saint George Monument represents Saint George heroically slaying a dragon. It was created in 1904 by Kálmán Lux and placed in Cluj in 1900. Saint George is quite significant to Romania, as there are many cities with the same name. The image of Saint George killing the dragon is featured on the flag of medieval Moldova sent by Stephen the Great to the Zografu Monastery from Mount Athos.
Image by Roamata on Wikimedia under Creative Commons License.
7

The Statue of Avram Iancu is located on stone blocks that symbolize the rocks of the Apuseni Mountains. The statue is encircled by a fountain. Avram Iancu was a Transylvanian lawyer, one of the leaders of the 1848–1849 revolt in Transylvania. Being the leader of an army in collaboration with the Austrian military authorities, he organized the defense of the Apuseni Mountains and resisted numerous attacks by Hungarian revolutionary groups.
Image by Burghiu on Wikimedia under Creative Commons License.