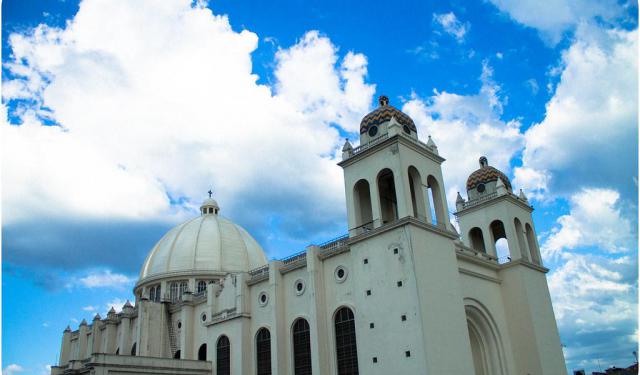 Image by Alexander Bonilla on Flickr under Creative Commons License.

Colonia Flor Blanca, one of the oldest areas of San Salvador, preserves architectural legacy of the Salvadoran capital established during its heyday in the middle of the 20th century. Alongside impressive residences reflecting neo-colonial and international styles, there are a number of churches and other attractions worth visiting while in the city. To learn more about San Salvador's most distinguished district, follow this orientation walk.
How it works: Download the app "GPSmyCity: Walks in 1K+ Cities" from iTunes App Store or Google Play to your mobile phone or tablet. The app turns your mobile device into a personal tour guide and its built-in GPS navigation functions guide you from one tour stop to next. The app works offline, so no data plan is needed when traveling abroad.

La Plaza Gerardo Barrios is an important landmark in the city. It is a place where many historical events occurred and it continues to be a site for events today. The funerals of important figures in El Salvador, such as Oscar Romero, took place here, along with the end to the Civil War in 1992. Today it serves as a site for public concerts, exhibitions, celebrations of the patron saint of San Salvador and different Masses and parades. It was designed by two brothers, Antonio and Carlos Ezeta, and has a statue of Gerardo Barrios. It is surrounded by noteworthy buildings like the Metropolitan Cathedral and the National Palace.
Image by Carlos Rodriguez Mata on Flickr under Creative Commons License.
2

Iglesia El Rosario was finished in 1971. Though it is located very close to the city's main cathedral, this church is worth a visit due to its uniqueness and beauty. The architect of this church is Ruben Martinez, who is from El Salvador. One of the most attractive points of the architecture of this church are its windows and interior lights that create a special atmosphere of peace and silence for praying and meditation. It is one of the last churches built in El Salvador that has elements of the European style. Another interesting element of the church is the iron sculpture of Christ on the cross at the altar.
Image by Randal Sheppard on Flickr under Creative Commons License.
3

Iglesia Cuerpo Del Cristo En El Salvador is a church that transmits and reveals the Gods wishes and sayings through the Holy Spirit and the words that are very important and semnificative for the population. The central church was established in 2001 but required its legal status in 1995. It represents also a congregation of Hispanic churches of this kind. The Lord Jesus words are taken very seriously because it represents the witness of God.
Image by chb1848 on Flickr under Creative Commons License.
4

Teatro Nacional de El Salvador, or National Theatre of El Salvador, is the oldest theatre in Central America. It began construction on November 3, 1911, by the French architect Daniel Beylard; and inaugurated March 1, 1917. The theatre is of French Renaissance style with modern touches. It was decorated by the Italian architect Lucio Capellaro, and its Great Hall is one of the most beautiful and elegant in Central America. After 59 years of constant activity, in 1976, a process of remodeling was begun. Funds were provided by the Salvadoran government.

Multiple architectural styles were enriched in the fusion of the construction of the National Theatre including: Versailles Style, Rococo, Romanticism, and Art Nouveau, with regional touches. Some of the furniture was elaborated in the shop of the theatre, the rest of the furniture, rugs, carpets, armchairs, and lecterns, were imported from the United States.

Image by Pedro Nonualco on Wikimedia under Creative Commons License.
Sight description based on wikipedia
5

Image by a tree is nice on Flickr under Creative Commons License.
Sight description based on wikipedia
6

Calle Arce (named after General Jose Manuel Arce, first president of the Federal Republic of Central America) is a major street in San Salvador. Mayor Norman Quijano inaugurated the first phase of its redevelopment near the Plaza de la Salud, which focuses on improvements to the sidewalks between 21st and 19th Avenida Norte. Twelve antique lights, originally from Spain and dating from 1900, will be installed, along with six benches and forty trees.
Image by Erickssonr on Wikimedia under Creative Commons License.
Sight description based on wikipedia
7

Iglesia El Calvario dates from the seventeenth century when it measured 16 yards and was built from metal and lime. Its location was considered the edge of town at that time. In 1854 was destroyed in a earthquake and later restored. The main material used during the restoration was wood which was consumed by a fire in 1908. After a period of time a real church was constructed, beautiful and concrete, that was built by known architects from Italy and Spain in Gothic style. It is an important model of churches in San Salvador due to its beauty and importance in the development of church architecture.
Image by Rafael Duran on Wikimedia under Creative Commons License.
8

Basilica Sagrado Corazon dates from the last century. It is known as the most beautiful religious building in the country. Construction materials used were wood and metal because they were very popular during that period. The church's construction took two decades. It sustained five earthquakes from the time of its construction until 2001, and due to that it was restored several times. In 1989 it was the main church in the city because the main cathedral was in a period of reconstruction at that time.
Image by Efegé on Wikimedia under Creative Commons License.
9

Museo de Ninos “Tin Marin” is an interesting place for children. It is a learning and fun center that is divided into four areas: health, technology, culture and environment. It is a place where kids can admire exhibits related to these four areas. They can explore and learn first-hand, practice balance in the gravity house, make paper, and paint something. There is also a recreation place and a small café where kids can relax and eat something in order to have energy for other activities. Entering without children is not allowed.
Image by CAMARO27 on Flickr under Creative Commons License.
10

Parque Cuscatlán is a nice park where everyone can spend time in a relaxing atmosphere. Due to its location it is one of the most popular places for relaxing. Important and attractive locations are around and inside the park, like the Monumento a la Memoria y la Verdad that is inside. The monument is a wall of 85 meters, made from granite, with all the names written in black. It opened in 2003 when a committee for civil victims decided to open it in order to commemorate the people that were killed during the 1970s. In addition, near the park is the Tin Martins Museum. The Sala Nacional de Exposiciones that presents exhibitions of contemporary art is also in close proximity.
Image by Carlos Rodriguez Mata on Flickr under Creative Commons License.