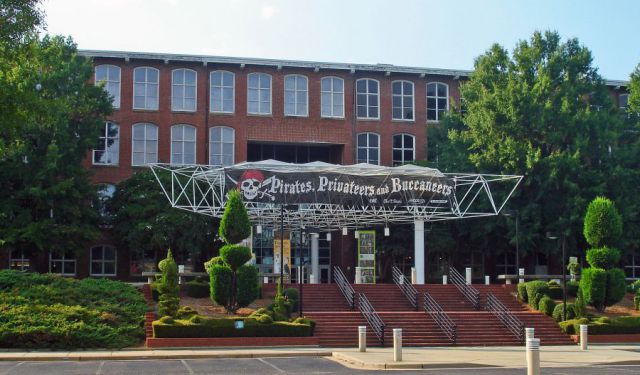 Columbia is a city that has a great number of tourist attractions. You can learn about the culture, history, and economy of this city through museums that convey information through their materials, collections and exhibitions. Take this tour and explore the best museums in Columbia, South Carolina.
How it works: Download the app "GPSmyCity: Walks in 1K+ Cities" from iTunes App Store or Google Play to your mobile phone or tablet. The app turns your mobile device into a personal tour guide and its built-in GPS navigation functions guide you from one tour stop to next. The app works offline, so no data plan is needed when traveling abroad.

Columbia Fire Museum is a place where unfolded the whole history of firefighting in the town from the 1800s till the present day. The whole exhibition includes materials that relate information about the most dangerous fire from that period, along with different tools used during a fire and in a fire engine in 1929. There are also photos taken in different years that present different cases of fire, a horse-drawer streamer from 1903 and other scenarios. All these materials are very important for the history of this city and for those young people that would like to choose this profession in their future; they need to see and better understand all the pros and cons.

Image by Pedro Kwezi on Flickr under Creative Commons License.
2

The Hale-Elmore-Seibels House or Seibels House is a historic building located in Columbia. Records of the exact year of its construction were destroyed in 1865 during the burning of the city by Union soldiers serving under General William Tecumseh Sherman. The best guess for the date of construction stems from a purported "1796" carved into a beam in the basement. Much of the early history of the house is uncertain, but it is thought to be the oldest building in Columbia. Located at 1601 Richland Street, the house is the headquarters of the Historic Columbia Foundation, and is open to the public as a museum. Its extensive restored garden serves as the backdrop for wedding receptions and other events.

Image by Abductive on Wikimedia under Creative Commons License.
Sight description based on wikipedia
3

Mann-Simons Cottage is a house transformed into a museum. It is owned by a midwife, Celia Mann, who was the first African-American woman in Columbia to own property before the Civil War. This was the early nineteenth century and was therefore important news for all African-American people. It is a beautiful white house that has been transformed up until today, with new rooms being added. It has a beautiful interior and has rooms arranged in accordance with that period, with white curtains, a wooden closet colored black, a fireplace and a kitchen full of necessary items with old lamps.
Image by DeeJayTee23 on Flickr under Creative Commons License.
4

4) Columbia Museum of Art (must see)

McKissick Museum is housed by the College of Art and Science of University of South Carolina. It has collections of different types of minerals, silver from the 18th century, gemstones and other types of stones that were found in the southwest part of the USA. It also exposes natural sciences, history and art materials related to mineral collections. There is a collection of pottery from the 20th century that was amassed by slaves. All these exhibitions are very valuable for the history of the nation's formation, fascinating for those that come and see them.

City Art is a local and small but very important gallery for regional artists. It is important because it exposes the most talented and impressive works of local artists. This gallery enables unknown talented people to become known not only in the city or country but in the whole world, because thanks to foreigners, all these people become known. Every year they organize “Emerging Artists of the Southeast” and these represent series of exhibitions presented in this gallery. This is meant to thank all the artists for their contribution in the development of art.
Image by Abby Lanes on Flickr under Creative Commons License.
7

One Eared Cow Glass is a gallery that presents pieces of art from glass. All models of vases, bowls, paperweights and bottles are hand made by glass sculptors and can be admired by people. The masters use some old techniques that date back thousands of years. Each of the pieces is individual and unique. All these models capture the eye due to their shapes, models and colors. The lighting bar helps people to admire these beautiful pieces more attentively and meticulously.