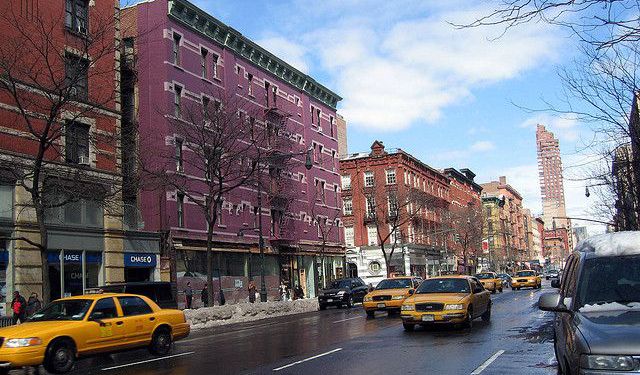 Image by vipeldo on Flickr under Creative Commons License.

Columbus offers several unique and beautiful museums dedicated to the city's history, culture, traditions and art, including a wonderful modern art museum, and one devoted to science and industry. Take the following tour to discover the best museums Columbus has to offer.
How it works: Download the app "GPSmyCity: Walks in 1K+ Cities" from iTunes App Store or Google Play to your mobile phone or tablet. The app turns your mobile device into a personal tour guide and its built-in GPS navigation functions guide you from one tour stop to next. The app works offline, so no data plan is needed when traveling abroad.

The Kelton House Museum and Garden is a Greek Revival and Italianate mansion in the Discovery District of downtown Columbus. The museum was established by the Junior League of Columbus to promote an understanding of daily life, customs, and decorative arts in 19th century Columbus and to educate visitors about the Underground Railroad.

Fernando Cortez Kelton, a merchant from Vermont and a drygoods wholesaler, built the Kelton House on Town Street in 1852. The Keltons were fervent abolitionists who used their home as a stop on the Underground Railroad. Fernando Kelton was so respected for his abolitionist work that he was selected to be a pallbearer at the funeral procession of Abraham Lincoln when Lincoln's remains were brought to Columbus on their way to Illinois for burial. The Keltons' eldest son Oscar joined the 95th Ohio Infantry, Company A in 1862 to fight against slavery. He rose to the rank of First Lieutenant before getting killed in the Battle of Brice's Crossroads on June 10, 1864. The house passed on to the Kelton's son, Frank Kelton. Frank later traded houses with his brother Edwin to better accommodate the various sizes of their families.

Image by Rednellie on Wikimedia under Creative Commons License.
Sight description based on wikipedia
2

2) Columbus Museum of Art (must see)

The Columbus Museum of Art is an art museum located in downtown Columbus. Formed in 1878 as the Columbus Gallery of Fine Arts, it was the first art museum to register its charter with the state of Ohio. Its original building was the Sessions Mansion. It was replaced on the same site by the current building, which opened on January 22, 1931. It was designed by Columbus architects Richards, McCarty and Bulford. The building was added to the National Register of Historic Places on March 19, 1992, under its original name.

The museum had historically focused on European and American art up through the early modern period, but in recent years has branched into more contemporary art exhibits and a permanent photography collection. Highlights of its permanent collection include early Cubist paintings by Picasso and Juan Gris, and works by Cézanne, Boucher, Ingres, Degas, Matisse, Monet, Edward Hopper, and Norman Rockwell. The Museum also has a substantial collection of paintings by Columbus native George Bellows. Its photography collection includes works by Berenice Abbott and Eugène Atget.

Central Ohio Fire Museum, located in a building included in the National Register of Historic Places, was opened in 2002, exhibiting a collection of firefighting equipment from past to present, including hand-drawn, horse-drawn and motorized vehicles. You will also find a variety of uniforms, fire safety manuals and other literature, photographs and other equipment. Featuring unique classes and interactive displays concerning fire safety.

Riffe Gallery exhibits beautiful regional art, works exchanged between other state art museums, including a fine selection of pieces from the Modernist Movement of the first half of the 20th century. You will find work by such renowned artists as Gertrude Abercrombie, Ivan Albright, Charles Burchfield, Manierre Dawson, Clara Deike and Frances Foy here, as well as workshops and educational events for children.

Operation Hours: Monday-Wednesday and Friday 10 am- 5 pm; Thursday 10 am- 8 pm; Sunday 11 am- 4 pm.
Image by jelene on Flickr under Creative Commons License.
5

The Columbus Cultural Art Center features regional and national art, including the work of students in the Loft Gallery, as well as touring exhibitions, educational workshops and art instruction classes. It is open Monday 1 pm- 4pm, 9 pm- 10 pm; Tuesday-Thursday 9 am- 4pm, 9 pm- 10 pm; Friday and Saturday 9 am- 4pm.
Image by puroticorico on Flickr under Creative Commons License.
6

6) COSI-Ohio Center of Science and Industry (must see)

COSI, formerly known as the Center of Science and Industry, is a science museum in Columbus. It features more than 300 interactive exhibits throughout themed exhibition areas – Ocean, Space, Gadgets, Life, Little Kidspace, Progress, the outdoor Big Science Park, and the newly opened Lily Pad, a watershed division of Ocean. WOSU@COSI, began in 2006 and is the first public broadcasting and science center partnership.

The museum also features exhibit areas that provide experiences for all age levels to combine science facts and learning through play. In addition to its exhibits, COSI has several live shows such as the Electrostatic Generator Show. There is also a seven-story Extreme Screen theater, the Science2GO! retail store, and the Atomicafe restaurant. COSI also hosts traveling exhibitions from other museums throughout the year.

More than five million teachers and students have experienced COSI’s education programs. These outreach education programs are tailored to support national and statewide science curriculum and standards. Programs such as Electronic Education and COSI On Wheels bring science learning to students throughout Ohio and across the country. Camp-In is an overnight program for Girl Scouts that began in 1972 at COSI. The program has since expanded to Boy Scouts, and is now duplicated nationwide at other science centers and museums.

Operation Hours: Daily: 10 am - 5 pm.
Image by Brant Jones on Wikimedia under Creative Commons License.
Sight description based on wikipedia
7

The Heroes of Harley-Davidson Exhibit, sponsored by the A. D. Farrow Company, contains models of old and new motorcycles, as well as boots, gloves and other biking memorabilia. It is dedicated to the hardworking employees of the Harley-Davidson Motor Company from its establishment in 1903 to its current rise to international fame.
Image by Stahlkocher on Wikimedia under Creative Commons License.

Columbus is rich in religious buildings which have an important historical, cultural and architectural significance to the city. Including Catholic, Protestant and Jewish places of worship, take the following tour to discover some of Columbus’ best religious architecture.

Columbus is home to a number of significant historic landmarks, including a beautiful replica of Christopher Columbus’ ship the Santa Maria, stunning skyscrapers, museums and galleries, parks and gardens which deserve attention. Take the following tour to check out some of Columbus’ most fascinating attractions.