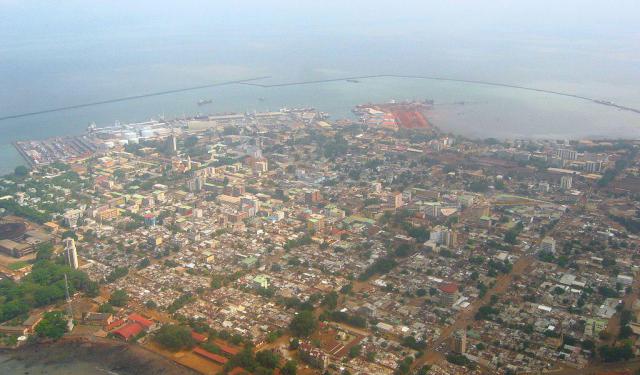 Image by Joelguinea on Wikimedia under Creative Commons License.

Conakry, the capital of the Republic of Guinea, is situated on the Kaloum Peninsula stretching into the Atlantic, and is known, among other attractions, for its beaches, lush palm vegetation and water sport activities. Still, there's more to Conakry than just that, as the city houses a good number of monuments, historic and religious sites, including the impressive Grand Mosque, vast Botanical Garden and more. Take this orientation walk to explore these and other popular attractions of Conakry.
How it works: Download the app "GPSmyCity: Walks in 1K+ Cities" from iTunes App Store or Google Play to your mobile phone or tablet. The app turns your mobile device into a personal tour guide and its built-in GPS navigation functions guide you from one tour stop to next. The app works offline, so no data plan is needed when traveling abroad.

Palais du Peuple (Palace of the People) serves as a venue for special events, including festivals, concerts and political events. Built in 1967 with the help of the Chinese, Palais du Peuple went through major renovations in 2008 for the 50th anniversary of Guinea's independence.
Image by Soman on Wikimedia under Creative Commons License.
2

The Monument du 22 Novembre 1970 is a monument in Conakry that celebrates the defeat of the attempted coup led by Portuguese troops in 1970, named Operation Green Sea. On 21 November 1970 a group of Portuguese troops assisted by Guinean fighters invaded Conakry from the sea in an attempt to overthrow the Touré regime. They captured Camp Boiro and liberated the prisoners. The camp commandant Siaka Touré managed to hide, but General Lansana Diané, minister of Defense, was captured. He later escaped and took refuge with the ambassador of Algeria. The coup attempt failed, and in the aftermath many opponents of the regime were rounded up and imprisoned in camp Boiro.

Construction of the monument began before 22 November 1971 in memory of the victims of the coup attempt. President Sékou Touré laid the foundation stone. The occasion was attended by many Guinean officials, and by Guinean and Chinese workers at the construction site. The Chinese Charge D'Affaires Tsao Kouan-lin made a speech praising the militant friendship between the people of Guinea and of China.

Image by Soman on Wikimedia under Creative Commons License.
Sight description based on wikipedia
3

2nd of October Park takes its name from the date October 2, 1958, when Guinea's independence was proclaimed. For a time the park was neglected, and was restored in 2009. It is a favorite weekend destination for many families. It contains several playgrounds and many come to dance and play traditional music.
Image by naotakem on Flickr under Creative Commons License.
4

Founded in 1894, the Botanical Garden is one of the most attractive sights in the city. It contains impressive tropical trees, and typical Guinean flora and fauna. The Botanical Garden is administered by the National Direction of Forests and Fauna, located in the heart of the garden.
Image by stevecadman on Flickr under Creative Commons License.
5

The Conakry Grand Mosque is a mosque in Conakry located north of the Conakry Botanical Garden. The mosque was built by Sékou Touré with funding from King Fahd of Saudi Arabia. It is the largest mosque in West Africa and the fifth in the world. Its four minarets, covered in green tiles (the color of Islam) can be seen from far away. Women must cover themselves from head to foot before they can enter. The mosque has 2,500 places on the upper level for women and 10,000 below for men. The gardens of the mosque contain the Camayanne Mausoleum, including Samouri Touré, Sékou Touré and Alpha Yaya.

On 28 September 2009 a demonstration against the military junta at a city stadium was violently suppressed by security forces, with hundreds of deaths and dozens of injuries. On Friday 2 October the bodies of 508 victims were laid in the esplanade in front of the mosque. A large body of prostitutes were present, and people started throwing stones at them. The police responded with tear gas, which flooded the interior of the mosque.

Image by Dbal on Wikimedia under Creative Commons License.
Sight description based on wikipedia
6

Camp Boiro or Camp Mamadou Boiro (1960 – 1984) is a defunct Guinean concentration camp within Conakry city. During the regime of President Ahmed Sékou Touré, thousands of political opponents were imprisoned at the camp. It has been estimated that almost 5,000 people were executed or died from torture or starvation at the camp.

After the death of Sékou Touré in 1984, the military took power and released many of the political prisoners at Camp Boiro. Many of the leaders of the former regime were imprisoned, and later executed. In the years that followed, the association of Victims of Camp Boiro fought for many years to maintain the memory of what had happened. The council of ministers issued a communique on 27 August 1991 for renovation of the camp and construction of a memorial to all the victims, but no action followed. The Association was forbidden to establish a museum in the former camp. In a 2007 interview, Bobo Dieng, a former senior official in the Touré government, stated that there had been just 117 deaths at the camp. It was not until 2009 that the interim president Moussa Dadis Camara met the members of the association. That year, demolition of the camp buildings began, but it was not known whether a memorial would be erected. As of 2010, there had been no commission of inquiry, and all documents about the camp were inaccessible or had been destroyed.

Image by André Karwath aka Aka on Wikimedia under Creative Commons License.
Sight description based on wikipedia
7

Gamal Abdel Nasser University, also Institut Polytechnique de Conakry was established in 1962 with 13 schools and faculties, including medicine. It was established during a period of progressive economic development in the country after independence.
Image by ThiagoJ on Flickr under Creative Commons License.
Sight description based on wikipedia
8

Stade 28 Septembre is a multi-purpose stadium in Conakry. It is currently used mostly for football matches. The stadium has a capacity of 35,000 people. In an attempt to host the 2016 African Cup of Nations (ANC), or Coupe d'Afrique des Nations (CAN) in French, proposals have been made to upgrade or reconstruct the September 28 Stadium to an all seater capacity of 75,000-80,000 people. Currently, a new all seater national stadium, with a capacity of 50,000-55,000, is being constructed in Nongo near Conakry, the capital of the Republic of Guinea.

The Stadium gets its name from September 28. The day Guinea voted famously NO in the French referendum, which ultimately led to the political independence of Guinea on October 2, 1958. Guinea-Conakry (formerly French Guinea) is the first former French colony in Sub-Saharan Africa to attain political independence.
Image by attawayjl on Flickr under Creative Commons License.
Sight description based on wikipedia