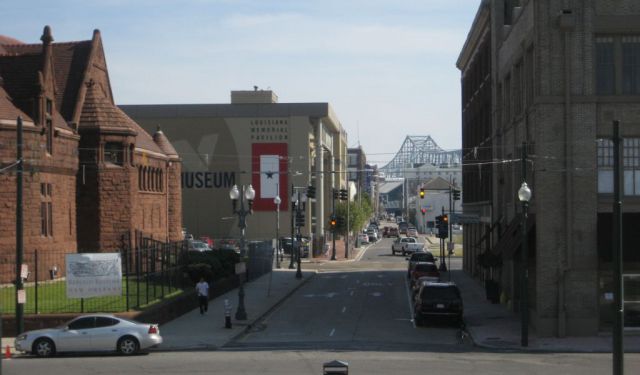 Image by Infrogmation on Wikimedia under Creative Commons License.

For most of the people living in New Orleans, the Central Business District is just a crowded area home to skyscrapers, malls and casinos. However the district is also home to a large number of heritage sites, including some well-known museums. The tour below takes in the cultural side of the Business District.
How it works: Download the app "GPSmyCity: Walks in 1K+ Cities" from iTunes App Store or Google Play to your mobile phone or tablet. The app turns your mobile device into a personal tour guide and its built-in GPS navigation functions guide you from one tour stop to next. The app works offline, so no data plan is needed when traveling abroad.

The Confederate Museum is an exhibition facility dedicated to displaying artifacts from the American Civil War. Built in 1891, the museum feature an impressive collection of artifacts, such as clothing, ammunition, currency, battle flags, weapons, and medical equipment. In addition, the silver camp service of Robert E. Lee, and the personal effects of P.G.T. Beauregard, Jefferson Davis, Braxton Bragg, and Franklin Gardner are also featured. The museum was placed on the National Register of Historic Places in 1975.

The museum’s collection came from the donations of the local people. In fact, most of the items came from the bequest of Jefferson Davis’ wife. Jefferson Davis was the first, last, and only President of the Confederate States of America. The personal effects of the soldiers, many of whom lost their lives, will leave a lasting impression on all who view them.

Another impressive element is the Lee Circle, a 16-foot statue outside of the museum that pays honor to Confederate General Robert E. Lee. The statue sits atop a 60-foot white marble column and faces north, the location of his enemies. Civil War enthusiasts will enjoy the detailed display of times past and children will get a firsthand lesson in history. The museum is open Tuesday through Saturday from 10 am to 4 pm.

Image by Kaihsu Tai. on Wikimedia under Creative Commons License.
2

The collection is the largest and most comprehensive collection of Southern art in the world and embodies the visual heritage and history of the American South from 1733 to the present. The collection consists of work by artists from or associated with fifteen southern states (Alabama, Arkansas, Florida, Georgia, Kentucky, Louisiana, Maryland, Mississippi, North Carolina, Oklahoma, South Carolina, Tennessee, Texas, Virginia, and West Virginia) and the District of Columbia. It is based upon the founding donation of more than 1,100 works from New Orleans businessman Roger H. Ogden's private collection. Since this original donation the museum’s collection of paintings, watercolors, drawings, prints, photographs, sculpture, wood and crafts has grown to include more than 4,000 works donated from individuals and collectors from across the US.

In addition, the museum includes Center for Southern Craft and Design (featuring unique craft/art using a variety of media created by southern artists), as well as the Stephen Goldring Hall (named after Stephen Goldring), which opened in 2003.

Since 2003, the Ogden Museum has hosted Ogden After Hours on Thursday nights, 6pm-8 pm. It is a place for Southern musicians who want to showcase new work or break into the New Orleans market. Visitors can enjoy music in such genres as blues, jazz (contemporary and traditional), R&B, country, folk, rockabilly, Cajun, bluegrass, Swamp pop, and rock 'n' roll.

Other programming includes: Southern Storytellers: A literary showcase (that includes a reading, Q&A and book signing) for Southern writers.
Artists and Sense of Place puts artists into New Orleans area schools; Summer camps focusing on art and fashion; and Films at the O screens movies that explore the culture of the American South.

Tip:
Check out the gift store stocked with lots of original work.
No cafe on-site, but there is one at the Contemporary Art Center across the street.

Opening Hours:
Fri-Wed: 10am-5pm; Thu: 10am-8pm
On Thursdays, patrons are treated to a jazz/funk/folk concert from 6 to 8pm.

Image by GlennetteClark on Flickr under Creative Commons License.
Sight description based on wikipedia
3

The National WWII Museum, formerly known as The National D-Day Museum, focuses on the contribution made by the United States to Allied victory in World War II. Founded in 2000, it was later designated by the U.S. Congress as America's official National WWII Museum in 2003. The museum maintains an affiliation with the Smithsonian Institution. The mission statement of the museum emphasizes the American experience in World War II.

Over two million people visit the museum each year. They are open daily from 9 am to 5 pm and are closed New Year’s Day, Mardi Gras, Thanksgiving, Christmas Eve, and Christmas Day. The museum can be scheduled for group visits, large parties, and corporate events. Reservations are required for large groups.

Why You Should Visit:
It's a very good place to swallow war propaganda.
Image by Infrogmation on Wikimedia under Creative Commons License.
Sight description based on wikipedia
4

Promoting the visual and performing arts and educating the masses is the foundation of the Contemporary Arts Center. Founded in 1976 by a group of visual artists, the multi-disciplinary structure offers an ever-changing lineup of workshops, seminars, and events.

Artists from the United States and from countries around the world have performed at or had their worked showcased at the center. The 30,000 square foot facility features a blend of modern architecture and classic New Orleans design. It is on the cutting edge of technology and features award winning galleries, atriums, theaters and studios. Whether your passion is art, theater, music, dance, photography, video, or sculpture, the center has something to fit your needs.

The Education Department features programs that reach out to adults, schoolchildren, and special needs individuals from all walks of life through a series of outreach programs. The gallery hours are Wednesday till Monday, 11 am to 5 pm.
Image by Infrogmation on Wikimedia under Creative Commons License.
5

The Audubon Insectarium is an entomology museum that features 50 live exhibits. The 23,000 square foot facility is part of the Audubon Nature Institute complex and is located on the first floor of the US Custom House Federal Building on Canal Street. It opened in 2008.

If you love all things insects, you will enjoy this museum. Interactive exhibits, fossils, and insects are everywhere. One interesting interactive element is the den that shrinks people down to the size of an insect. The exhibits and attractions include the Underground Gallery, the Louisiana Swamp Gallery, the Termite Gallery, the Butterfly Garden, the Metamorphous Gallery, the Hall of Fame Gallery, the Ward Night, and the Bug Appétit.

Two of the attractions you should make a definite effort to see are Awards Night and Bug Appétit. Awards Night is an animated film that features the voices of Jay Leno, Joan Rivers, and Brad Garrett. The film allows viewers to visit a red carpet event for bugs. The Bug Appétit allows patrons to watch chefs prepare meals that contain insects and to sample those dishes once they are complete.

Why You Should Visit:
A wonderful interpretive experience and "museum" including both live and mock insects.
By the end of the tour, you'll have had the chance to see how bugs live underground, taste bugs in a couple of ways, touch a millipede and see tarantulas up close, and walk through a butterfly sanctuary.
For children especially, this would be an outstanding place to visit.

Tip:
Buying tickets only for the Insectarium is a bit pricey. The best deal is to get a bundle pack that also includes the zoo and aquarium (you don't have to visit all in the same day).
Make sure to check out the gift shop at the end of the Insectarium tour, however, as prices are very reasonable.

If you are looking to learn about the heritage sites of New Orleans you might want to take this tour. Widely known for its variety of unique architectural styles, the city has lots of fine examples of buildings in the Greek Revival, the American Colonial and the Victorian styles. Check out the tour suggested below for an orientation.

Dating back to the 19th century, Garden District in New Orleans is famous for its heritage mansions and cottages. Along with the heritage sites you will discover several great specialty shops. Take the tour below and discover the beauty and unique atmosphere of the Garden District.