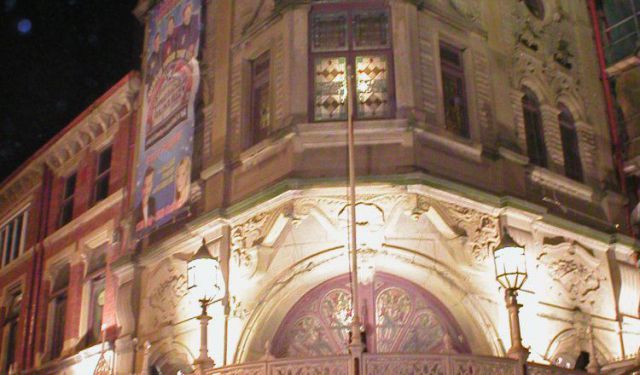 Image by Haversack on Flickr under Creative Commons License.

Blackpool is home to several museums and art galleries that are well worth visiting. Here you will find classical and contemporary art galleries, a wax museum, a Victorian theater, the exciting Sea Life Center, and more. Take this tour to explore the most interesting and popular cultural venues in Blackpool.
How it works: Download the app "GPSmyCity: Walks in 1K+ Cities" from iTunes App Store or Google Play to your mobile phone or tablet. The app turns your mobile device into a personal tour guide and its built-in GPS navigation functions guide you from one tour stop to next. The app works offline, so no data plan is needed when traveling abroad.

Founded in 1998, Blott Artist Studios is an art gallery located on King Street. The gallery displays contemporary art created by professional artists from the Blackpool area. Numerous temporary exhibitions are held throughout the year. Art lovers and collectors will love the variety of pieces on display, which include paintings, prints, sculptures, and more. Blott Artist Studios is open on Mondays and Thursdays from 10:30 am until 2:00 pm.
Image by Allie_Caulfield on Flickr under Creative Commons License.
2

The Grundy is an art gallery located in Blackpool. It's eclectic programme consists of regional historic to recent contemporary art exhibitions. Opened in 1911, it is owned and operated by Blackpool Council. Blackpool Council commissioned the building of the Grundy Art Gallery in 1908 following a bequest of 33 artworks and a financial gift from brothers John and Cuthbert Grundy, both of whom were local artists.

Designed by Cullen, Lockhead and Brown, the gallery has coupled Ionic columns supporting a stone pediment bearing a carved Blackpool Borough crest. Together with Central library the gallery opened on 26 October 1911. In 1912, a purchase fund for new artworks was set up to build upon the 33 artworks. By the late 1930s, the collection and general ambition of the gallery had outgrown the original building, and so an extension of two extra galleries was built. It opened in 1938. The Grundy now contains nearly 2,000 objects. Grundy's collection, which is displayed as part of the temporary exhibitions programme and is not on permanent display, includes Victorian oils and watercolours, modern British paintings, contemporary prints, jewellery and video, oriental ivories, ceramics, as well as photographs and souvenirs of Blackpool.

Image by Stuart Ian Burns on Flickr under Creative Commons License.
Sight description based on wikipedia
3

The Friends of the Grand supports the Grand Theater and its programme of events. Formed in 1973 to save the building from demolition, the first Friends were literally ‘hands-on’. They painted the dressing rooms, repaired holes to the ceiling and helped to get the theater into shape. The role of the Friends of the Grand has changed over the years. They now raise funds from subscriptions and social events to finance projects within the theater. The Friends are also the founding angel of the National Theater of Variety.

Image by Tony Hisgett on Wikimedia under Creative Commons License.
Sight description based on wikipedia
4

Opened to the public in 1979, the Blackpool Sea Life Center is located on the famous Promenade. At this popular attraction, you can discover the fascinating world of the sea. The center has an extensive collection of fish and other ocean creatures, as well as the world’s largest display of sharks. The Blackpool Sea Life Center is a great place to take the whole family. It is open Monday - Friday from 10 am to 5 pm, and Saturday and Sunday from 10 am to 6 pm.
Image by David Ingham on Wikimedia under Creative Commons License.
5

Louis Tussaud's Waxworks is located on the Promenade, just opposite Central Pier. This cultural venue houses a huge number of wax models, which are presented in eight themed rooms on four separate floors. The wax models are mainly of popular celebrities from around the world. The museum was founded by Louis Tussaud, the great-grandson of the famous Madame Tussaud. Louis Tussad arrived from London in 1900 to create his own wax gallery in Blackpool. Don’t forget to bring a camera, so you can take a picture with your favorite star!
Image by Green Lane on Wikimedia under Creative Commons License.