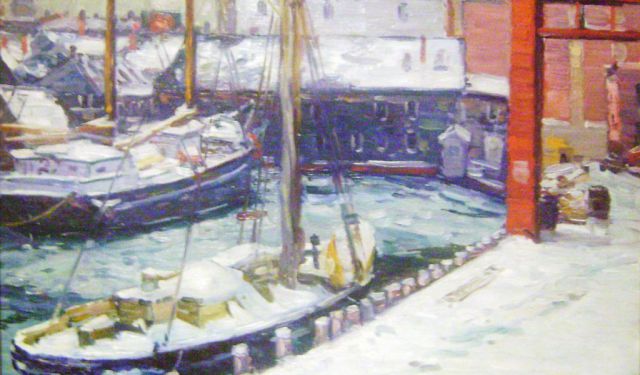 Cincinnati, with a population of approximately a million, is a culturally diverse city. Cincinnati boasts museums and theaters, including the Cincinnati Playhouse in the Park, the Aronoff Center and more. For those who love art, theater and history, this tour will help you discover Cincinnati's cultural gems.
How it works: Download the app "GPSmyCity: Walks in 1K+ Cities" from iTunes App Store or Google Play to your mobile phone or tablet. The app turns your mobile device into a personal tour guide and its built-in GPS navigation functions guide you from one tour stop to next. The app works offline, so no data plan is needed when traveling abroad.

Located on Cincinnati's scenic riverfront, the Showboat Majestic is the last original floating theater still in operation in the United States. The City of Cincinnati has owned the Showboat Majestic since 1967. The theater provides Cincinnati residents with a full season of musicals, comedies, dramas and other entertainment. In 1989, the 75-year-old showboat became an official National Historic Landmark.
Image by Adam Brown on Flickr under Creative Commons License.
2

The Mercantile Library of Cincinnati is a membership library located in downtown Cincinnati. The name of the Library refers not to the type of items in its collection but to the forty-five merchants and clerks who founded it on April 18, 1835 as the Young Men's Mercantile Library Association, a group which included William Henry Harrison.

Throughout the Library's history, many of its books have been donated by members. It originally contained approximately seven hundred books which were housed at a location on Main Street near Pearl Street. In 1840 the collection of 1660 books was moved to the second floor of the Cincinnati College building on the present site. The collection now numbers more than 200,000 volumes, including an especially large number pertaining to Cincinnati and Ohio.

The Library's tradition of cultural programs was initiated by its founders and has featured prominent writers and thinkers since its first lecture series in the 1840s. Speakers in the early days included Ralph Waldo Emerson, Wendell Phillips, W. M. Thackeray, Edward Everett, Herman Melville, Henry Ward Beecher and Harriet Beecher Stowe; more recent programs have brought writers and speakers like John Updike, Tom Wolfe, and Jonathan Winters. Many events, including courses, concerts, author readings and book signings, are scheduled at noon for the convenience of members and visitors who work and shop downtown.

Image by Rick Dikeman on Wikimedia under Creative Commons License.
Sight description based on wikipedia
3

The Aronoff Center is a fine arts performance venue located in downtown Cincinnati. The center was designed by architect Cesar Pelli and opened in October 1995. Today, the Aronoff Center houses three theaters: Procter & Gamble Hall, Jarson-Kaplan Theater and Fifth Third Bank Theater. It also has an art gallery and space for ballet, musical, drama, and comedy performances.
Image by Sonnett on Flickr under Creative Commons License.
4

The Pendleton Art Center is located on the eastern edge of Over-the-Rhine in an eight-story building that dates back to 1909. The center serves as a studio for more than 200 artists and houses 130 galleries. It is the world's largest artists' cooperative located under one roof. The Pendleton Art Center's mission is to support creativity, to provide an encouraging environment and to raise public awareness of contemporary art.

6) Cincinnati Playhouse in the Park (must see)

The Cincinnati Playhouse in the Park was founded in 1959 by college student Gerald Covell and was one of the first regional theaters in the United States. Located in Eden Park, the first play that premiered at the Playhouse on October 10, 1960, was Meyer Levin's 'Compulsion'. The Playhouse has maintained a regional and national reputation in the theater community for bringing prominent plays to Cincinnati, as well as hosting national premieres such as Tennessee Williams' 'The Notebook of Trigorin' in 1996 and world premieres such as the Pulitzer Prize-nominated 'Coyote on a Fence' in 1998 and 'Ace' in 2006.

The Playhouse facility includes two theaters: the larger Robert S. Marx Theater and the smaller Thompson Theater. In addition to a full ten-month season of plays, the Playhouse also offers acting classes and programs for children.