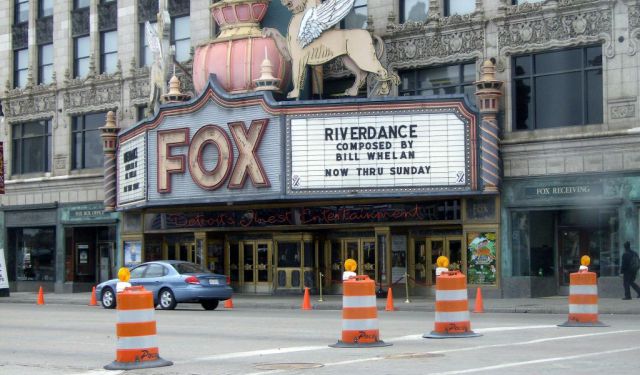 Detroit is a multicultural city heavily influenced by the automobile industry. The city has a thriving arts scene and boasts many art galleries and theaters. This self-guided tour will lead you to Detroit's best cultural attractions.
How it works: Download the app "GPSmyCity: Walks in 1K+ Cities" from iTunes App Store or Google Play to your mobile phone or tablet. The app turns your mobile device into a personal tour guide and its built-in GPS navigation functions guide you from one tour stop to next. The app works offline, so no data plan is needed when traveling abroad.

The Detroit Opera House is an ornate opera house located in Grand Circus Park Historic District of Detroit. It is the home of the Michigan Opera Theatre and its productions. The 2,700 seat venue also hosts a variety of other events. The historic theatre opened January 22, 1922.

The theatre was originally designed by C. Howard Crane, having created other prominent Detroit theaters such as The Fillmore Detroit, Fox Theater and the Detroit Symphony's Orchestra Hall. Architect Eric J. Hill participated in an extensive restoration of the building which reopened in 1996.

The present Detroit Opera House opened in 1922 and was originally known as the Capitol Theatre. It was among the first of several performance venues built around Detroit's Grand Circus Park. When it opened, the theater was the fifth largest in the world, seating up to 4,250 people. In 1929, the Capitol Theater's name was changed to the Paramount Theater, and in 1934 was changed again, to the Broadway Capitol Theater.

Image by Bnosnhoj on Wikimedia under Creative Commons License.
Sight description based on wikipedia
2

The Fillmore Detroit is a mixed-use entertainment venue operated by Live Nation. The Detroit Music Awards are held annually at The Fillmore Detroit in April. Built in 1925, the Fillmore Detroit was known for most of its history as the State Theatre, and prior to that as the Palms Theatre. It is located near the larger Fox Theatre in the Detroit Theatre District along Woodward Avenue across from Comerica Park and Grand Circus Park. It contains a theatre with a Grand Lobby and two levels of seating, as well as the State Bar & Grill which has a separate entrance and is open when the theatre is not hosting events. During many concerts the lower seating is removed for dancing. The building was listed on the National Register of Historic Places in 1982.

The Fillmore Detroit is a busy concert venue for popular music acts, and rarely hosts larger, multiple-night, Broadway-style theatre shows like the Fox Theatre does. Its current seating capacity (with cabaret style terraced seating and a dance floor) is 2,200. If the original seats (in storage) were reinstalled and the original grade brought back to the theatre orchestra level, its seating would be 3,000. The mezzanine and balcony levels still contain their original theatre seating. Currently the main floor has seating for 700, and the mezzanine and balcony have a combined seating for 1,500. All-age shows as well as adult-only concerts are held; during 21 years plus events, alcohol sales are offered at several theatre concessions including access to the State Bar & Grill.

The Fox has 5,048 seats (5,174 seats if removable seats placed in the raised orchestra pit are included). It is the largest surviving movie palace of the 1920s and the largest of the original Fox Theatres. The Fox was fully restored in 1988. The adjacent office building houses the headquarters of Olympia Entertainment and Little Caesars.

Orchestra Hall is an elaborate concert hall located at 3711 Woodward Avenue in Midtown Detroit. The hall is renowned for its superior acoustic properties and serves as the home of the internationally known Detroit Symphony Orchestra (DSO), the fourth oldest orchestra in the United States. With the creation of an adjoining auditorium for jazz and chamber music in 2003, Orchestra Hall became part of the Max M. Fisher Music Center. It was listed on the National Register of Historic Places in 1971.

G. R. N’Namdi Gallery is recognized internationally as one of the most important contemporary abstract art galleries. It was founded in 1980 by George N’Namdi in Detroit, and it has since expanded to other U.S. cities. This gallery exhibits contemporary art work and fosters art appreciation. Here you can view pieces by notable contemporary abstract artists. The artwork displayed here is also exhibited in famous art museums and institutions in Chicago, New York, and other large cities.