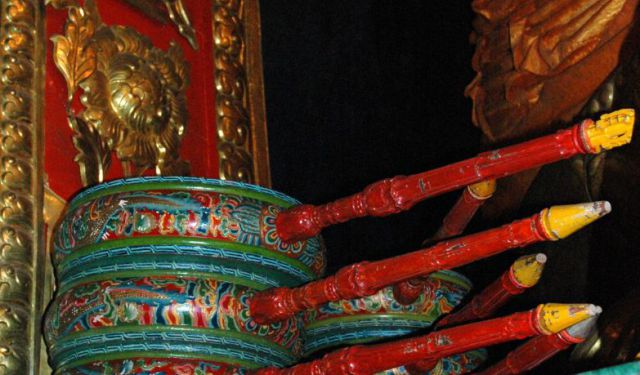 Image by Wonderlane on Flickr under Creative Commons License.

Kathmandu valley has been traditionally considered one of the greatest treasure houses of art. Its culture can be discovered by visiting the numerous stupas, temples and shrines. But there is much more to Kathmandu than just that. Listening to a Newari music performance or learning about Nepal by visiting a museum, will give you a cultural insight into the destination. Take this self-guided tour to understand and appreciate the cultural life of Kathmandu.
How it works: Download the app "GPSmyCity: Walks in 1K+ Cities" from iTunes App Store or Google Play to your mobile phone or tablet. The app turns your mobile device into a personal tour guide and its built-in GPS navigation functions guide you from one tour stop to next. The app works offline, so no data plan is needed when traveling abroad.

1) National Museum of Nepal (must see)

The National Museum of Nepal (Rashtriya Sangrahalaya) is a popular attraction of the capital city of Kathmandu. Being about a century old, the museum stands both as a tourist destination and historical symbol for Nepal. The main attractions are collection of historical artworks (sculpture and paintings) and a historical display of weapons used in the wars in 18-19th century. The museum has separate galleries dedicated to statues, paintings, murals, coins and weapons. It has three buildings - Juddha Jayatia Kala Shala, Buddha Art Gallery and the main historical building which consists of natural historical section (collection of different species of animals, butterflies and plants), cultural section and philatelic section.

The museum was established in 1928 and was then known as Chhauni Silkhana, literally meaning "arsenal museum". It was originally used to display firearms and weapons used in the glorious past of the war history of Nepal. It was opened to the public in February 1939. Until then only foreign scholars/dignitaries and invitees or guests could have a glimpse of the collection. The Art Gallery was opened in 1943. In 1967 museum was named as Rashtriya Sangrahalaya (literally "National Museum of Nepal").

Image by John Pavelka on Wikimedia under Creative Commons License.
Sight description based on wikipedia
2

The Natural History Museum of Tribhuvan University has a rather extensive collection of stuffed animals, birds and fish. The exhibition hall has low ceiling and side rooms. The air is rather heavy with dampness and a chemical smell. Almost all the creatures are set in an aggressive attack or defense pose - baring their fangs, raising their wings.
Image by Paul J Everett on Flickr under Creative Commons License.
3

Swayambhunath is an ancient religious complex atop a hill in the Kathmandu Valley, west of Kathmandu city. It is also known as the Monkey Temple as there are holy monkeys living in parts of the temple in the north-west. For the Buddhist Newars in whose mythological history and origin myth as well as day-to-day religious practice, Swayambhunath occupies a central position, it is probably the most sacred among Buddhist pilgrimage sites. For Tibetans and followers of Tibetan Buddhism, it second only to Boudhanath.

The Swayambhunath complex consists of a stupa, a variety of shrines and temples, some dating back to the Licchavi period. A Tibetan monastery, museum and library are more recent additions. The stupa consists of a dome at the base, above which is a cubical structure painted with eyes of Buddha looking in all four directions with the word "unity" in the main Nepali dialect between them. There are pentagonal Toran present above each of the four sides with statues engraved in them. Behind and above the torana there are thirteen tiers. Above all the tiers there is a small space above which the Gajur is present.

Image by rahuldlucca on Flickr under Creative Commons License.
Sight description based on wikipedia
4

Kalamandapa Institute of Classical Nepalese Performing Arts is situated at the Hotel Vajra, Dallu, Kathmandu. Every Tuesday, at 7 PM, you can admire traditional Nepali dances and theater. Every Sunday (and sometimes Friday) authentic Newari music shows and masked dances are performed. The admission ticket includes tea.
Image by kevincure on Flickr under Creative Commons License.
5

The Asa Archives are located in Kulumbbhula, Kathmandu. The historical importance of this archive is high because it preserves a large collection of old manuscripts. The oldest manuscript was written in 1464. Also not only handwritten books can be seen here, but also palm-leaf manuscripts, which are a delight for history lovers. The whole collection has over 7000 items.
Image by Piterpan on Wikimedia under Creative Commons License.
6

Dharmapala Thangka Center is situated on Durbar Marg, near the south gate of the Royal palace. This is not only a shop, but also a showroom where you can admire the thangkas being painted. Thangka is a Tibetan art form. A thangka is a colorful image covered with a silk fabric that depicts a Buddhist deity, or a scene from the life of Buddha.
Image by Wonderlane on Flickr under Creative Commons License.
7

The NAFA Gallery is situated in the Sita Bhavan house, a neo-classical old Rana palace in the Naxal District. The building is adjacent to the Bal Mandir School. The gallery is operated by the Arts and Crafts Department of the Royal Nepal Academy. NAFA is divided into two galleries: the permanent Birendra Art Gallery, situated nearby, and a temporary gallery. The temporary gallery, situated in Sita Bhavan house, displays works of contemporary Nepalese artists.
Image by unforth on Flickr under Creative Commons License.

Pashupatinath Temple is situated near the Tribhuvan International Airport in Kathmnadu. The area in which it is located is truly picturesque - surrounded by virgin jungle. Though you may not be allowed to enter Pashupatinath, you can admire it from the other bank of the river, or you can visit some famous temples situated in this region. We encourage you to take the Pashupatinath temple...  view more

Tundikhel is one of the hidden treasures of Kathmandu. On this huge green field colorful festivals are held frequently. If you are not fond of festivals, you may explore important landmarks that are situated nearby - Bhimsen Stambha, complimented by the Sundhara fountains, Sahid gate, Bhadrakali Temple, etc. Take this self-guided tour to discover the prominent attractions of Tundikhel in...  view more