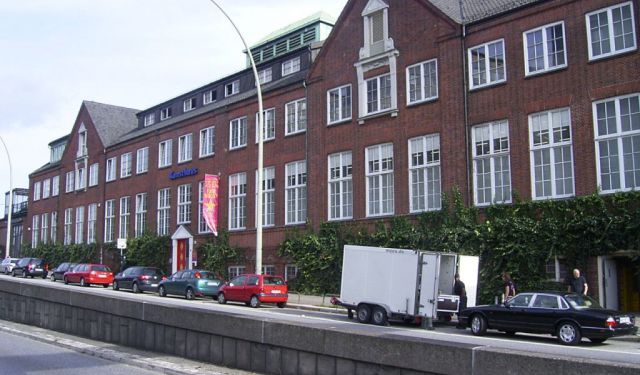 Image by Claus-Joachim Dickow on Wikimedia under Creative Commons License.

The city of Hamburg is well known as a culturally rich citadel for different arts. Galleries, musical facilities and theatres exposing different styles and artists are open for everybody to enjoy the beauty of art. Take this tour to experience the cultural Hamburg.
How it works: Download the app "GPSmyCity: Walks in 1K+ Cities" from iTunes App Store or Google Play to your mobile phone or tablet. The app turns your mobile device into a personal tour guide and its built-in GPS navigation functions guide you from one tour stop to next. The app works offline, so no data plan is needed when traveling abroad.

The Schmidt Theater opened its doors on August 8, 1988; Schmidts Tivoli opened in 1991 in the former Bavarian Hofbräuhaus. The Schmidt family owned it in the early days, that is, "Mr. Schmidt" Corny Littmann and Lilo Wanders (Ernie Reinhard).

Especially popular was the midnight show with a surprise program of professional and amateur performances and cabaret numbers. The individual numbers rarely lasted longer than a few minutes. This midnight shows were shown later by the NDR from Schmidts Tivoli and made the television broadcast on the Schmidt Theater accessible nationwide.

Image by Sir James on Wikimedia under Creative Commons License.
Sight description based on wikipedia
2

Back in 1841, the operetta house was a theatre. The building burned down in 1876, but was reopened only a year later. The Operetta House is known as a musical theatre since the 1920s. It was damaged several times during World War II, but was fully renovated in 2002. It holds an important position in Hamburg’s culture. Various stars perform here from the beginning of their careers to the climax of their success.
Image by Ingo Drzewiecki on Wikimedia under Creative Commons License.
3

First opened in 1908, the Laeiszhalle is the premier classical music venue in a city with a rich musical heritage, from Brahms to the Beatles, who spent many years living in the city. It will soon be joined by the Elbe Philharmonic Hall, a new venue due to open in the HafenCity in 2015. Both venues will work in partnership to attract the most stellar names in the classical field to Hamburg. It wouldn’t be the first time – Richard Strauss, Sergei Prokofiev and Igor Stravinsky have all performed or conducted their own works within this historic concert hall.

Image by Claus-Joachim Dickow on Wikimedia under Creative Commons License.
4

The Hamburg State Opera (in German: Hamburgische Staatsoper) is one of the leading opera companies in Germany. Hamburgische Staatsoper, the present building of the Hamburg State Opera, opened in 1678 and was rebuilt in 1955. The Hamburg State Opera dates back to January 2, 1678 when the "Opern-Theatrum" was inaugurated with a performance of a biblical Singspiel by Johann Theile. It was not a court theatre but the first public opera house in Germany established by the art-loving citizens of Hamburg, a prosperous member of the Hanseatic League.
Image by Andreas Praefcke on Wikimedia under Creative Commons License.
Sight description based on wikipedia
5

The Ohnsorg Theater in Hamburg is a stage where comedy is performed in Platt; it plays a major role in spreading the knowledge of this language. The theatre was founded by Dr. Richard Ohnsorg in 1902 as Dramatische Gesellschaft Hamburg, with the stated purpose of providing a stage on which plays in Platt could be performed. This was often not possible in other theatres, since Platt was generally considered to be a sign of low social rank and rather boorish. Plays, whether written in Platt, or translated from German and other languages, were performed in cramped conditions in various locations. After the war in 1946, the theatre was renamed the Richard Ohnsorg-Theater, and since 1954, its plays are broadcast by the NDR. Its productions made the cast hugely popular, especially the main star Heidi Kabel, primarily during the 60's and 70's .
Image by Heidas on Wikimedia under Creative Commons License.
Sight description based on wikipedia
6

Das Schiff is the name of the only seaworthy vessel theatre in Europe, and it is situated in Hamburg. The theater is located in an ocean-going, 32-meter-long vessel with a draft of 1.2 meters. The ship was that of Eberhard Moebius and in October 1975, his wife Christa decided to transform it into a floating theater. In a short time, the theatre became a typical part of Hamburg's culture, comedy and cabaret scene. Famous artists such as Gert Frobe, Heinz Reincke, Helmut Qualtinger and Senta Berger came on board for guest appearances. The theatre has 120 seats that are grouped no more than seven meters away from the stage.
Image by Ile-de-re on Wikimedia under Creative Commons License.
7

The Deichstrasse Gallery was established in 1984 and exhibits over 1,000 objects. You can see the works of Hamburg painters and learn about the city through its own artists. The Gallery offers various additional services related to the art. It is one of the city's main galleries for Hamburg impressions, maritime art and framings.