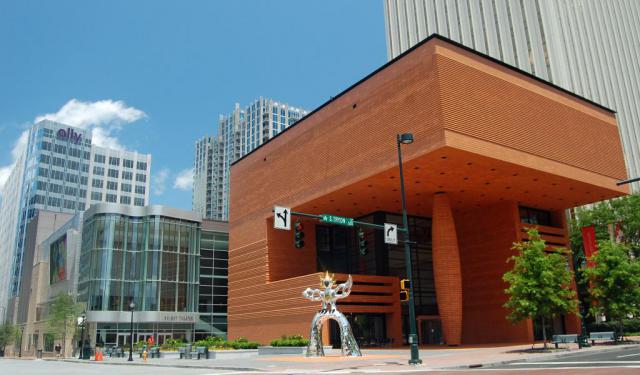 Image by James Willamor on Flickr under Creative Commons License.

If you want to learn more about the rich culture of the southeastern United States, Charlotte is the place to go. There are numerous art galleries, museums and cultural centers to explore. Check out Charlotte's most interesting cultural venues on this self-guided tour!
How it works: Download the app "GPSmyCity: Walks in 1K+ Cities" from iTunes App Store or Google Play to your mobile phone or tablet. The app turns your mobile device into a personal tour guide and its built-in GPS navigation functions guide you from one tour stop to next. The app works offline, so no data plan is needed when traveling abroad.

Originally built in 1926, the McColl Center For Art + Innovation is an art center, which promotes visual art in all its forms. The center showcases interesting exhibits in such fields as printmaking, photography, drawing and mixed media. It was founded by Hugh L. McColl Jr. (born 18 June 1935); a fourth-generation banker ;

Image by Revas on Wikimedia under Creative Commons License.
Sight description based on wikipedia
2

2) Levine Museum of the New South (must see)

The Levine Museum of the New South, located in Charlotte is a history museum focusing on life in the North Carolina Piedmont after the American Civil War. The museum includes temporary and permanent exhibits on a range of Southern-related topics.

The museum's permanent exhibit is called "Cotton Fields to Skyscrapers: Charlotte and the Carolina Piedmont in the New South", and features period displays that reflect regional history. The displays include a one-room tenant farmer's house, a cotton mill and mill house, an African-American hospital, an early Belk department store, and a civil-rights era lunch counter. Changing exhibits focus on local culture, art and history.

Image by jbarreiros on Flickr under Creative Commons License.
Sight description based on wikipedia
3

Charlotte Mecklenburg Library is located in Charlotte's Uptown at 310 North Tryon Street. The original building was razed in 1954 and a modern one was constructed. This building was extensively remodeled in the 1980s and currently serves as the hub of library activities throughout Mecklenburg County. Located centrally in the heart of Charlotte's Arts & Education district, the Main Library offers a multitude of services, materials and programs, and it supports the activities of the library system's twenty-four locations and outreach services.
Image by Charlotte Mecklenburg Library on Flickr under Creative Commons License.
Sight description based on wikipedia
4

Located on West Trade Street, the Arts and Science Council was founded in 1958. It is one of the leading cultural organizations in Charlotte and was established to promote and nurture public art.
Image by jbarreiros on Flickr under Creative Commons License.
5

The Bechtler Museum of Modern Art in Charlotte, North Carolina is a 36,500 sq. ft. museum space dedicated to the exhibition of mid-20th-century modern art. It is named after the family of Andreas Bechtler, a native of Switzerland who assembled and inherited a collection of more than 1,400 artworks created by major figures of 20th-century modernism. The modern art collection is part of the new Levine Center for the Arts. The Bechtler Museum of Modern Art opened to the public on January 2, 2010 with Mayor Anthony Foxx of Charlotte and Andreas Bechtler attending. The museum is only the second in the country designed by Swiss architect Mario Botta, who also designed the San Francisco Museum of Modern Art. A key design element of the four-story structure is the soaring glass atrium that extends through the museum’s core and diffuses natural light throughout the building. The open atrium allows for visual interplay between spaces. Other notable features include a vaulted skylight system and an enveloping terra cotta exterior.

The Bechtler collection reflects most of the important art movements and schools from the 20th century with a deep holding of the School of Paris after World War II. The collection comprises mid-century modern art in various media by artists such as Alberto Giacometti, Joan Miró, Max Ernst, Andy Warhol, Jean Tinguely, Barbara Hepworth and Pablo Picasso. Many of the artists are represented by their exploration of a particular theme or subject matter through a variety of media and approaches.

Operation hours: Monday, Wednesday – Sunday: 10 am to 5 pm.
Image by kouk on Flickr under Creative Commons License.
Sight description based on wikipedia
6

Elder Gallery is located on South Boulevard in the historic South End District. The gallery features the unique collections of Leon A. Makielski and Ernest Walker. It also displays a wide variety of original artwork and fine sculptures created by European and American artists.

Hidell Brooks Gallery is located in the historic South End District on East Boulevard. The gallery specializes in artwork by well-established and famous artists. Here you will find single artist and group exhibitions of both regional and national artists.

Charlotte is a destination that has everything to make everyone happy. One can visit Discovery Place for some entertainment and education, or visit the city's historical museums; organize a picnic in a park or do some window shopping. Charlotte has a number of memorable landmarks to visit, too - the beautiful Trade Center Sculpture, the creative Firebird sculpture and the amazing four...  view more

Charlotte is home to a variety of religious buildings, representing a range of religious denominations. Some of the buildings date back to 19th century and are quite beautiful. Take this tour to see Charlotte's most noteworthy places of worship!

Myers Park is considered to be one of the city's oldest districts. Here, along it's bowery streets, one may find a lot of gorgeous and attractive buildings. This tour will lead you through the most beautiful churches of Myers Park, as well as Mint Museum of Art and Wing Haven Gardens.

Downtown Charlotte or Uptown (as it is usually called by locals) is home to a number of historic structures and old buildings. Among its highlights are the Liddell-McNinch House, Newcomb-Berryhill House, and Overcarsh House. Check out the most noteworthy historic buildings in Charlotte’s Uptown on this walking tour!