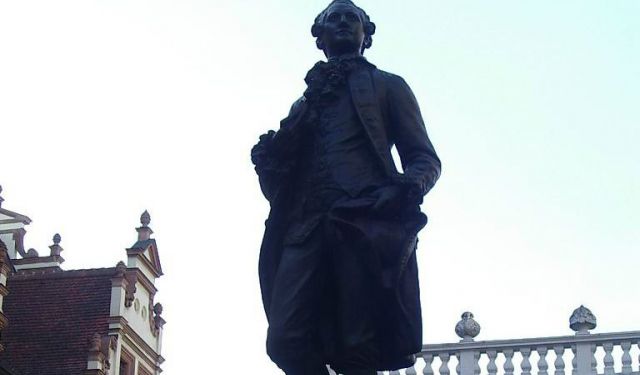 Image by Staka on Wikimedia under Creative Commons License.

Leipzig is one of the richest and most artistic cities in Europe due to its connection with such famous names as Bach, Goethe and Mendelssohn. The art and cultural scene is shaped by its famous opera and theaters, landmarks, festivals and museums. Take the following tour to explore Leipzig’s most beautiful cultural attractions.
How it works: Download the app "GPSmyCity: Walks in 1K+ Cities" from iTunes App Store or Google Play to your mobile phone or tablet. The app turns your mobile device into a personal tour guide and its built-in GPS navigation functions guide you from one tour stop to next. The app works offline, so no data plan is needed when traveling abroad.

Operation hours: Open daily 10 am to 6 pm. The museum is closed on December, 23rd to 26th. Also it is closed on New Years Eve and January, 1st.

Image by Appaloosa on Wikimedia under Creative Commons License.
2

Schauspiel is one of Leipzig’s main dramatic theaters. Since 2008, it has also been known as the Central Theater. Founded in 1901, it was located on Bosestraße und Gottschedstraße, but was destroyed in 1945. The present venue was built in 1957 by architects K. Souradny, R. Brummer and F. Herbst. Inaugurated in 1975 with a performance of Schiller’s Wallenstein play, since then it has hosted various dramatic performances, art shows and other events.
Image by Dundak on Wikimedia under Creative Commons License.
3

The Leipzig Forum of Contemporary History, located in the center of Leipzig, has a permanent exhibition on the history of the GDR with a focus on opposition, moral courage and resistance against the background of German division. The museum has a large collection of over 3,200 objects and historic documents and also hosts temporary exhibitions on various historical themes.

The Leipzig Opera traces its establishment to the year 1693, making it the third oldest opera venue in Europe after La Fenice (Venice, Italy) and the Hamburg State Opera (Hamburg, Germany). The Leipzig Opera does not have its own opera orchestra, and the Leipzig Gewandhaus Orchestra performs as the orchestra for the opera. During an air raid in the night of December 3, 1943, the theater was destroyed, as were all Leipzig's theatres. Construction of the modern opera house began in 1956. The theatre was inaugurated on October 8, 1960, with a performance of Wagner's Die Meistersinger von Nürnberg.
Image by profstewartrk on Flickr under Creative Commons License.
Sight description based on wikipedia
5

Gewandhaus, a world famous concert hall in Leipzig, is the third hall to have this name. Home of the Leipzig Gewandhaus Orchestra, the name translates loosely into a building where cloth is traded. The first Gewandhaus was built in 1781 by architect Johann Carl Friedrich Dauthe. The second opened in 1884, and was destroyed by the bombings of World War II between 1943 and 1944. The present Gewandhaus, opened on October 8, 1981 is known for its fine acoustics.
Image by Andreas Praefcke on Wikimedia under Creative Commons License.
Sight description based on wikipedia
6

Krystallpalast Varieté is the ideal place for fine German variety theater. Opened in 1882, it was the first, largest and most famous music hall in Leipzig. After the bombing in World War II it was closed and reopened in 1997. The shows presented are innovative, including juggling, acrobatics, comedy, music and much more.
Image by Aurelian Săndulescu on Flickr under Creative Commons License.
7

Galerie für Zeitgenössische Kunst, or the Gallery of Contemporary Art, exhibits Leipzig’s largest collection of art from Europe and beyond, including amazing works by notable 20th and 21st century artists.

Image by Tino Strauss on Wikimedia under Creative Commons License.
8

8) University of Music and Theater

Founded in 1843 by Felix Mendelssohn as the Conservatory of Music, this is the oldest music university in Germany. It includes the traditional Church Music Institute founded in 1919 by Karl Straube. In 1992 the Hans Otto Drama School, Germany’s oldest drama school became part of the college. Since the beginning there has been a close relationship with Gewandhaus and the Leipzig Opera House. This school leads all German music colleges, holding around 470 public events yearly.
Image by Appaloosa on Wikimedia under Creative Commons License.
Sight description based on wikipedia