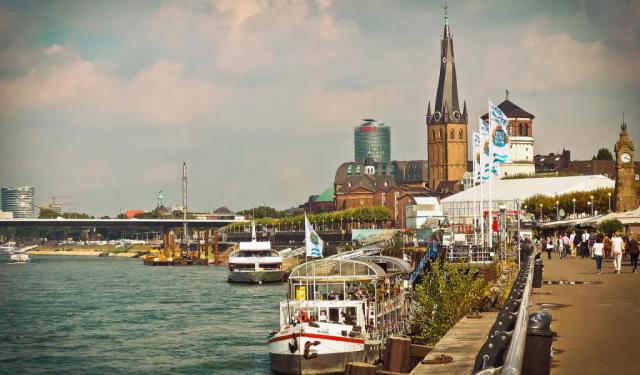 Image by Ilion on Wikimedia under Creative Commons License.

Düsseldorf provides numerous cultural venues, as you probably already know. In this self-guided tour you will find famous museums, halls, galleries and educational institutions. Don’t miss the chance to see the most beautiful and relevant cultural places in Düsseldorf.
How it works: Download the app "GPSmyCity: Walks in 1K+ Cities" from iTunes App Store or Google Play to your mobile phone or tablet. The app turns your mobile device into a personal tour guide and its built-in GPS navigation functions guide you from one tour stop to next. The app works offline, so no data plan is needed when traveling abroad.

For those who wish to learn more about German art, literature and history, Goethe Museum is the best place to visit. It was built in memory of the famous writer and poet Johann Wolfgang von Goethe. Goethe-Museum represents a Baroque palace; you will discover many things pertaining to life of this poet. This museum even includes some artworks which were inspired by his writings. Actually, the area where this museum was built is known as the place where the writer lived during a certain period in the 18th century.
Image by Thomas Mielke on Wikimedia under Creative Commons License.
2

Theater Museum is yet another museum in Düsseldorf that attracts tourists and visitors by its collections that revive German theatrical history, especially that of Düsseldorf, which is more than 400 years old. Here one can see fascinating, rotating exhibitions of famous actors, dancers, singers, directors and even collections of specific stage and costume design. Go ahead and visit this amazing museum - it provides an awesome overview of Germany’s and Düsseldorf's theatrical history.

Image by Andreas Praefcke on Wikimedia under Creative Commons License.
3

Schauspielhaus was officially opened in January 1970 and the first to perform on this stage was Georg B's Danton's Tod. From the very beginning, Schauspielhaus was not so large and was accessible only to a small number of lucky people; tickets were not available for the general public. Nowadays, Schauspielhaus features several levels. There is the Kleine Haus (Small House), Gro Haus (Large House) and also a basement. Kleine Haus is considered to be more of an amateur stage while Gro Haus has a wider range of performances.
Image by Johann H. Addicks on Wikimedia under Creative Commons License.
4

The original opernhaus was constructed between 1873 and 1875 as the City Theatre from a design by Ernst Giese (1832-1903). By its inauguration day, 29 November 1875, it was only partially completed due to cost overruns, but it continued to the operated by the city authorities. By 1891 an electric lighting system had been installed. The auditorium contained a parquet level, 2 levels of seating plus a gallery, providing a total of 1,260 seats.

By 1921 the city had transferred the ownership of the theatre to the opera company and, in 1925, it was renamed as the Operhaus to distinguish it from another theatre then presenting operettas. After bombs in January and November 1943 during the Second World War destroyed much of the auditorium, some performances did proceed for several months in 1944, but in an auditorium reduced to 1,000 seats. By September 1944 all theatres were closed, and regular performances did not begin again until October 1945 with Bizet's Carmen.

In the post-war years major renovations began in 1954 to improve the temporary wartime repairs. Between 1954 and its reopening on 22 April 1956, the house was restored and inaugurated with a performance of Beethoven's Fidelio. The house now seated 1,342 people.


Image by Jöran MM on Wikimedia under Creative Commons License.
Sight description based on wikipedia
5

Komödchen is a musical cabaret located in Düsseldorf. This place features a great bar scene and music hall with live performances. It is called mediocre opera by the locals, but nevertheless this place manages to attract tourists and visitors all the time.
Image by Johann H. Addicks on Wikimedia under Creative Commons License.
6

The school was founded by Lambert Krahe in 1762 as a school of drawing. In 1773, it became the "Kurfürstlich-Pfälzische Academie der Maler, Bildhauer- und Baukunst" (Elector of Palatine's Academy of Painting, Sculpture and Architecture). During the Napoleonic Wars, the earl's art collection was inherited by the Wittelsbach family and moved to Munich, prompting the Prussian government—who had annexed the Düsseldorf region after Napoleon had surrendered—to change it into a Royal Arts Academy in Düsseldorf, in 1819.

In the 1850s, the Kunstakademie Düsseldorf became internationally renowned, with many students coming from Scandinavia, Russia and the USA to learn, amongst other things, the genre and landscape painting associated with the "Düsseldorf school".
Image by Wiegels on Wikimedia under Creative Commons License.
Sight description based on wikipedia
7

In 1926, architect Wilhelm Kreis built the biggest planetarium in the world and in 1970 it was re-established into a concert hall named Tonhalle. From the very beginning, music of all genres and styles, from classical to jazz and chanson, was played. Thanks to a refined and sophisticated sound distortion, acoustics are really great. You will discover that this music hall is unique and that it is unlike others as they put on the best concerts with music written by famous composers.
Image by Alice Wiegand on Wikimedia under Creative Commons License.