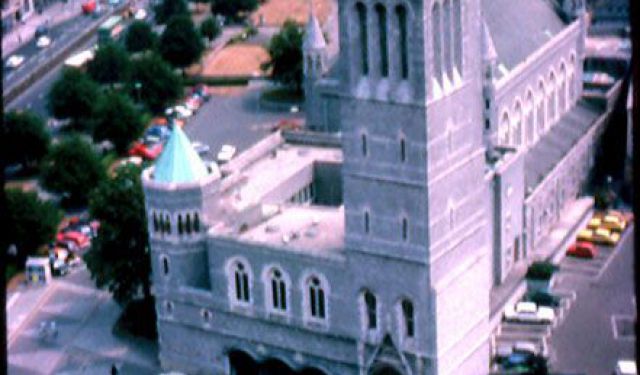 Image by Simon Johnston on Wikimedia under Creative Commons License.

Plymouth - the beautiful maritime town of international value has been called 'city of the world' for its vibrant cultural scene and historic legacy. Elizabethan houses or England's oldest gin distillery, Plymouth's jewels will satisfy any curious mind. Get closer to British heritage through the cultural and historical places of this one of a kind city with this self-guided walking tour.
How it works: Download the app "GPSmyCity: Walks in 1K+ Cities" from iTunes App Store or Google Play to your mobile phone or tablet. The app turns your mobile device into a personal tour guide and its built-in GPS navigation functions guide you from one tour stop to next. The app works offline, so no data plan is needed when traveling abroad.

The Theatre Royal consists of a large main auditorium that can produce West End musicals, opera and ballet; a smaller experimental theatre called The Drum; and, on a separate site, a production and education centre known as Theatre Royal 2. Theatre Royal was designed in 1977 by the Peter Moro Partnership, which had already designed a number of new theatres around the country. Building started in 1979 and the theatre was officially opened on 5 May 1982 by Princess Margaret.

The Theatre Royal comprises 1315 seats, but has a unique ability to compress the auditorium, creating a more intimate performance space of 787. It has a steep auditorium with two galleries and very large proscenium arch. The range of work presented and produced is extensive and includes major touring drama and musical productions, as well as leading opera and dance companies (including Birmingham Royal Ballet, Rambert Dance Company, Glyndebourne On Tour and Welsh National Opera). The Theatre Royal also produces its own drama and musical productions each year, usually with commercial or subsidised partners. Many tour nationally or transfer to the West End.

Image by Lewis Clarke on Wikimedia under Creative Commons License.
Sight description based on wikipedia
2

In the heart of the city stands this grandiose monument to Victorian art. The interior of the Guildhall is just as imposing as its fantastic facade. Plymouth's most important historic events are depicted on a set of stained glass windows. In the main hall hangs a Gobelin tapestry, portraying Raphael's 'Miraculous Draught of Fishes' – a present from Napoleon III.
Image by Penny Mayes on Wikimedia under Creative Commons License.
3

This beautiful 16th century residence was the home of several Plymouth mayors. The house is currently a magnificent display of various artifacts in its four mini museums. Old curiosities, a Victorian schoolroom, Blitz room and Edwardian pharmacy provide an exclusive glance into Plymouth's vibrant history.

Image by Tim Jenkinson on Flickr under Creative Commons License.
4

A rare surviving structure of its period, the Elizabethan House is a great example of early 1600s living in Britain. The practically unchanged 7 rooms on 3 floors have bare wooden floors and original furniture, taking you back to Drake's Plymouth.
Image by Alan Hawkes on Wikimedia under Creative Commons License.
5

Plymouth Mayflower Center takes you on a fascinating journey through time. Discover how Plymouth's seaside location influenced its evolution – a trading port, fishing centre and a point that saw the beginning of numerous marine adventures. For centuries, Sutton harbour was in the middle of many world famous historical events, the most important being the epic voyage of the Pilgrim fathers aboard the Mayflower towards the New world.

The Mayflower exhibition is open :

Plymouth Arts Centre is a nationally-renowned, contemporary arts gallery, with frequent exhibitions by local and regional artists. Located in a historic buildling it is also home to Plymouth's only independent cinema, screening international movies, and a lovely vegetarian restaurant as well.
Image by Webrarian on Flickr under Creative Commons License.