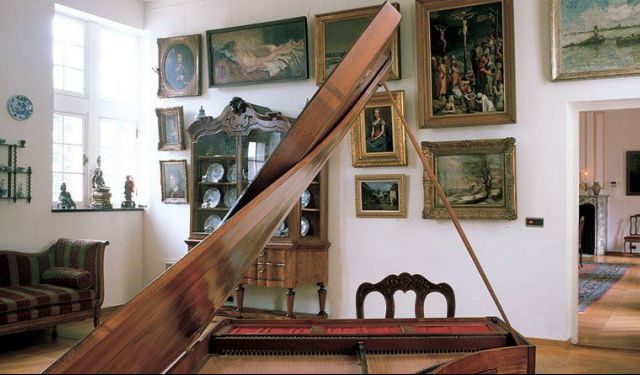 Image by Kleon3 on Wikimedia under Creative Commons License.

Maastricht is a charming Dutch city situated on the banks of the River Maas. It has a rich culture, which is reflected by the city's numerous museums, theaters and art centers. There are more than thirty galleries that showcase the artistic heritage of the country. This tour will provide you with insight into Maastricht’s cultural scene.
How it works: Download the app "GPSmyCity: Walks in 1K+ Cities" from iTunes App Store or Google Play to your mobile phone or tablet. The app turns your mobile device into a personal tour guide and its built-in GPS navigation functions guide you from one tour stop to next. The app works offline, so no data plan is needed when traveling abroad.

Theater aan het Vrijthof is one of the city's most important cultural venues. It was officially inaugurated in 1992. The theater is located in a beautiful palace built at the beginning of the 19th century. The largest hall, the Papyrus Room, seats about 855 people. The Papyrus Room hosts the majority of the theater's performances. The theater's repertoire includes both artistic and popular performances: dance and cabaret, classical and modern music concerts, musicals, dance, theater and drama. The theater cooperates with other cultural venues and participates in inter-cultural programs.
Image by Otter on Wikimedia under Creative Commons License.
2

Marres Center is a center for contemporary art and design. It has spacious exhibition rooms and a garden where a variety of cultural events and art exhibitions are often held. The center organizes lectures and projects on philosophy and the problem of actuality. Marres Center has a large specialty book shop where you can find all kinds of books on art, design, fashion and photography.
Image by Maaike Lauwaert on Flickr under Creative Commons License.
3

Huub Hannen Gallery was founded by Huub Hannen about 15 years ago. The gallery focuses on promoting young, talented local artists with an emphasis on contemporary art: sculpture, painting, photography and glasswork. Expositions of two or three artists' work at a time provide contrasts and spark discussions.
Image by FaceMePLS on Flickr under Creative Commons License.
4

Lighthouse of Music is a famous music venue in the city. It is located not far from the bank of the River Maas. It organizes brilliant live concerts and music festivals. The Lighthouse also provides musical education and has helped nurture a number of successful musicians. If you are a fan of jazz music, be sure to catch a concert at the Lighthouse, as the center’s pop/jazz department has been putting on high-quality jazz concerts for more than 10 years.
Image by seriousbri on Flickr under Creative Commons License.
5

Post Garcia Gallery was founded by Paloma Garcia and Peter Post and is located on Ceramique Avenue in a beautiful building designed by well-known Swiss architect Mario Botta. Visit the gallery to plunge into the world of contemporary art. The gallery is open Thursday to Sunday.
Image by Simon&Beek on Flickr under Creative Commons License.
6

Center Céramique is one of the city's most popular attractions. It is located on Céramique Avenue. The building is cube-shaped and is situated right across from the bridge. It boasts a large library with plenty of Dutch literature. The center houses art exhibition halls, the city archives, a cafe and meeting rooms. There is a great view of the city's 16th-century defensive fortifications from the reading room.
Image by >WouteR< on Flickr under Creative Commons License.
7

Bonnefantenmuseum is a famous art museum specializing in the history of art. It features archeological finds from the region, as well as sculptures and paintings from the southern region of the country, which date back to the medieval period. It is situated in a noteworthy edifice designed by Italian architect Aldo Rossi. It was built in 1995 on the left bank of the River Maas. It houses private and public collections of old and contemporary artists.
Image by Mussklprozz on Wikimedia under Creative Commons License.
8

TEFAF is a unique venue that houses the world's largest art and antiques fair. TEFAF was established in 1975 as the Pictura Fine Art Fair. There is no other place where you can see such a fine collection of antiques and rare art objects. Here you will find paintings from Bruegel to Bacon, as well as original applied art dating from 4000 B.C. Every item is of very high quality, and the authenticity has been verified by international experts. Different cultural events such as dance and theater performances and classical and jazz music concerts are often held at the center.
Image by tizzle on Flickr under Creative Commons License.