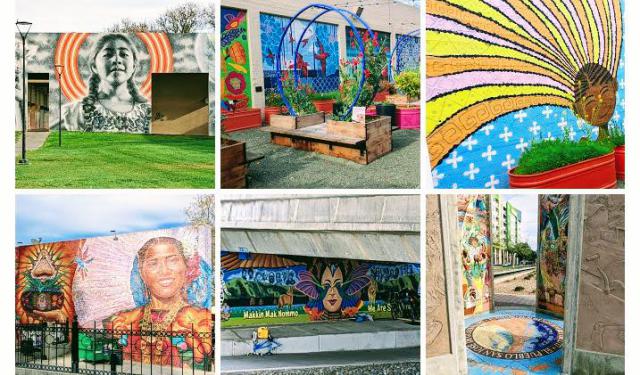 Image by Don DeBold on Flickr under Creative Commons License.

San Jose offers numerous art galleries, museums and theaters with unique exhibits and performances. You will be amazed at how much San Jose has to offer in this respect. Many of its venues boast beauty and function in their architecture. Take the following tour to discover San Jose’s rich cultural scene.
How it works: Download the app "GPSmyCity: Walks in 1K+ Cities" from iTunes App Store or Google Play to your mobile phone or tablet. The app turns your mobile device into a personal tour guide and its built-in GPS navigation functions guide you from one tour stop to next. The app works offline, so no data plan is needed when traveling abroad.

City Lights Theater Company features around six original productions each year. Besides their own performances, it offers shows from smaller theater companies. Its Youth and Education Program allows emerging actors and directors to improve their skills alongside professionals. The box office is open Monday through Friday from 1:00 pm to 5:00 pm, with performances usually taking place on Thursdays, Fridays and Saturdays at 8:00 pm, and on Sundays at 2:00 pm and 7:00 pm.
Image by DanBrady on Flickr under Creative Commons License.
2

Ballet San Jose, established in 1986, was created in cooperation with the Cleveland Ballet. In 2000 the Cleveland Ballet was disbanded and the name was changed to Ballet San Jose Silicon Valley. In 2006 it got its present name. Since 2007 it has consisted of 44 dancers and a repertoire of over 120 ballets. Its box office is open Monday through Friday from 9:00 am to 5:00 pm.
Image by Al aka pintofeggs on Flickr under Creative Commons License.
3

The Theater on San Pedro Square is managed by the Tabard Theater Company, which was founded in 2001. Some of its profits are donated to causes related to its performances. This theater hosts three Tabard productions each year and several others, good for all ages. Besides theatrical performances, live jazz and other performing arts events can be seen here as well.
Image by Steve Snodgrass on Flickr under Creative Commons License.
4

The HP Pavilion at San Jose, also known as the Shark Tank because it hosts games by the hockey team the San Jose Sharks, was established in 1993 as the San Jose Arena. In 2001 it was renamed Compaq Center at San Jose, and in 2002 after HP purchased Compaq it was given its present name. It holds about 190 events a year, including hockey and basketball games, tennis matches, figure skating, Disney shows, circuses and concerts.
Image by JaGa on Wikimedia under Creative Commons License.