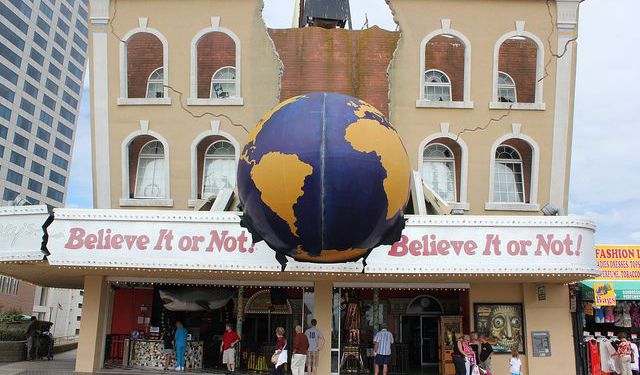 Although Atlantic City is a prominent seaside resort, it houses a number of cultural venues. Atlantic City Art Center will help you to discover local and national art, Historical Museum will teach you about the city’s history and past, Ripley's Believe It Or Not will impress you by its unique exhibits and IMAX Theatre and Dante Hall Theater of the Arts will offer you the best performing arts. The tour presented below will guide you through the most renowned cultural venues in Atlantic City.
Image Courtesy of Flickr and Stinkie Pinkie.
How it works: Download the app "GPSmyCity: Walks in 1K+ Cities" from iTunes App Store or Google Play to your mobile phone or tablet. The app turns your mobile device into a personal tour guide and its built-in GPS navigation functions guide you from one tour stop to next. The app works offline, so no data plan is needed when traveling abroad.

1) Ripley's Believe It Or Not (must see)

Ripley's Believe It Or Not is another cultural venue in Atlantic City. The museum is situated on the famous Boardwalk in a strange building that seems to have been demolished by a wrecking ball. This cultural center is famous for its bizarre exhibits and a lot of interesting memorabilia. Ripley's Believe It Or Not is one of the city’s best attractions and one of the most interesting museums in the world.

Just across the street from the impressive Historic Boardwalk Hall, at Kennedy Plaza, you will see another city’s prominent landmark - Workers Monument - created by sculptor Thomas Jay Warren. The monument was established in 1998 to honor all men and women of organized labor who died during their work on the redevelopment of Atlantic City since 1977. Near the 8-foot bronze statue of a construction employee you will see 25 names of trade workers engraved on the front of the five-foot granite wall.
Image Courtesy of Flickr and Paul Lowry.
3

Boardwalk Hall contains the world's largest musical instrument, a pipe organ of over 33,000 pipes, 8 chambers, its console the world's largest of 7 manuals and over 1000 stop keys, and one of two actual 64'stops. Also included in this organ are pipes which are on 100 inches of pressure, the Grand Ophicleide being the loudest and also most famous.

It was declared a U.S. National Historic Landmark in 1987. The venue seats 10,500 people for ice hockey, and at maximum capacity can accommodate 14,770 for concerts.

Image Courtesy of Flickr and Paul Lowry.
Sight description based on Wikipedia.
4

The IMAX Theatre is conveniently situated at the Tropicana Home of the Quarter (Tropicana Casino and Resort). This cultural venue houses Academy Award-winning technology that provides the best quality sounds and crystal clear images. Here you will enjoy the most impressive and immersive movie experience.
Image Courtesy of Flickr and Paul Lowry.
5

5) Dante Hall Theater of the Arts

Dante Hall Theater of the Arts is another cultural venue in Atlantic City, situated in the heart of the city, in the Ducktown district. Originally constructed in 1926 as an addition to St. Michael’s Church, this newly restored cultural venue is considered one of South Jersey’s best performing art venues. Dante Hall Theater of the Arts is a perfect destination for enjoying local performing artists and art shows. This spacious building offers 243 seats and an extensive diversity of professional performances.
Image Courtesy of Flickr and royblumenthal.