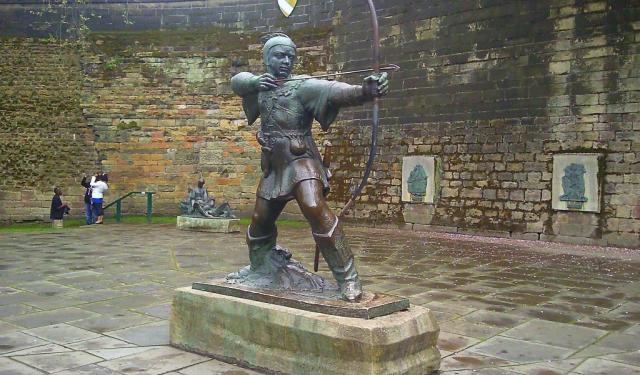 Nottingham is an exciting city that offers a variety of fun activities for both tourists and locals. Take this tour to experience Nottingham's cultural scene and visit some of the city's best galleries, theaters, and concert venues.
How it works: Download the app "GPSmyCity: Walks in 1K+ Cities" from iTunes App Store or Google Play to your mobile phone or tablet. The app turns your mobile device into a personal tour guide and its built-in GPS navigation functions guide you from one tour stop to next. The app works offline, so no data plan is needed when traveling abroad.

Boots Library is part of Nottingham Trent University. The library provides free access to its collection of books, magazine, and journals and offers study space for groups and individuals. You can also use the library's computers to access the Internet. The library is open Monday to Friday from 8:30 a.m. to 9 p.m., Saturday from 9 a.m. to 5 p.m., and Sunday from 2 p.m. to 7 p.m.
Image by Franc Buxton on Flickr under Creative Commons License.
2

Image by shining.darkness on Flickr under Creative Commons License.
Sight description based on wikipedia
3

3) The Theater Royal (must see)

The Theater Royal is part of the city's Royal Centre, which also incorporates the Nottingham Royal Concert Hall. The theater attracts major touring dramas, opera, ballet, West End musicals and an annual pantomime. The Theater Royal was completed in 1865, after six months of work and costing the clients, lace manufacturers John and William Lambert £15,000. The Classic façade and Corinthian columns designed by Charles J. Phipps are still a major Nottingham landmark.

The noted theatrical architect Frank Matcham was engaged to build the new Empire Palace of Varieties next door. The Theater Royal was closed between the end of April and September 1897 for remodeling. The works included building new dressing rooms at the rear to clear part of the site for the Empire. Matcham also refashioned the existing auditorium. Frank Matcham pioneered the use of cantilevered steel in his designs, and patented his design. This allowed balconies to be built without the use of supporting pillars; which had characterized the work of the previous generation of theater architects, such as Phipps. Without pillars, lowering the stage and increasing the rake of the tiers: sight lines were much improved and the audience capacity increased to around 3,000.

The theater has four tiers of seating, the stalls, dress circle, upper circle and balcony with a total capacity of 1,186 seats. It has seven fully licensed bars including The Green Room Cafe Bar on the ground floor and The Restaurant on the dress circle level.

Broadway Cinema presents some of the best movies from around the globe, from American blockbusters to Bollywood films. It is an independent cinema that features modern, up-to-date equipment. In addition to showing a range of films, Broadway Cinema hosts international film festivals and encourages its visitors to learn about cinematography.
Image by mattbuck4950 on Flickr under Creative Commons License.
5

Nottingham Contemporary (formerly known as the Center for Contemporary Art Nottingham) is a contemporary art center in the Lace Market area of Nottingham. To celebrate the area's history of lace manufacture, the cladding of the building is embossed with a traditional Nottingham lace pattern.

Nottingham Contemporary opened on November 14, 2009 with an exhibition of early works by David Hockney and current works by Los Angeles based artist Frances Stark, some from the Tate collection. Nottingham Contemporary is one of the largest contemporary art spaces in the UK, with four galleries, an auditorium, an education space, a study center, a café-bar and a shop. It organizes four to five major exhibitions a year, bringing the work of the world’s contemporary artists to Nottingham. The ideas raised by the exhibitions are explored in educational activity for all ages. Nottingham Contemporary is on the oldest site in Nottingham, Garners Hill, it once housed cave dwellings, a Saxon fort and a medieval town hall – before the Victorians swept all aside for a railway line.
Image by ~Duncan~ on Flickr under Creative Commons License.
Sight description based on wikipedia
6

Nottingham Castle is a castle in Nottingham, England. It is located in a commanding position on a natural promontory known as "the castle rock", with 130 foot cliffs to the south and west.The first Norman castle was a wooden structure and of a mote-and-bailey design, and was built in 1067, a year after the Battle of Hastings, on the orders of William the Conqueror. This wooden structure was replaced by a far more defensible stone castle during the reign of Henry II, and was imposing and of a complex architectural design, which eventually comprised an upper bailey at the highest point of the castle rock, a middle bailey to the north which contained the main royal apartments, and a large outer bailey to the east. After the restoration of Charles II in 1660, the present 'Ducal Mansion' was built by Henry Cavendish, 2nd Duke of Newcastle between 1674 and 1679 on the foundations of the previous structure.
Image by Rob Bradford on Wikimedia under Creative Commons License.
Sight description based on wikipedia
7

Nottingham Castle is located in a commanding position on a natural promontory known as "'Castle Rock'", with cliffs 130 feet (40 m) high to the south and west. In the Middle Ages it was a major royal fortress and occasional royal residence. In decline by the 16th century, it was largely demolished in 1649, but sufficient fragments remain to give an impression of the layout of the site. A ducal mansion later occupied the summit of the promontory. This was burnt out by rioters in 1831, and later adapted as an art gallery and museum, which remains in use today.

Nottingham Castle houses most of the City of Nottingham's fine and decorative art collections, galleries on the history and archeology of Nottingham and the surrounding areas, and the regimental museum of the Sherwood Foresters. Nottingham Castle now plays host to a number of public annual events. This includes the Nottingham Beer Festival, the Robin Hood Pageant and even played host to the world record breaking attempt for the most people dressed as Robin Hood in one place in 2008.
Image by Rob Bradford on Wikimedia under Creative Commons License.
Sight description based on wikipedia