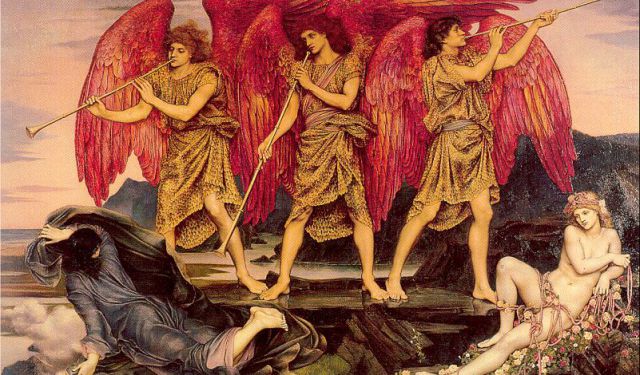 Bournemouth is a tourist centre of culture and history. There are many art galleries and art museums; one of them is Russell-Cotes Art Gallery & Museum, that boasts the most unique and quirky collections in the world. There is a huge modern library, theaters and Bournemouth International Center. You can visit the tomb of famous May Shelley - the author of one of the famous Frankenstein novels. Take this self-guided tour to explore the cultural attractions of Bournemouth.
Image Courtesy of Wikimedia and Evelyn de Morgan.
How it works: Download the app "GPSmyCity: Walks in 1K+ Cities" from iTunes App Store or Google Play to your mobile phone or tablet. The app turns your mobile device into a personal tour guide and its built-in GPS navigation functions guide you from one tour stop to next. The app works offline, so no data plan is needed when traveling abroad.

Image Courtesy of LordHarris.
Sight description based on Wikipedia.
2

The Pavilion Theatre and Ballroom is Bournemouth's traditional venue for year round entertainment. Built in the 1920s, it retains its splendour and elegant styling and is Bournemouth's regular home for West End stage shows, Opera, Ballet, Pantomime and Comedy as well as for corporate presentations and dinner dances, product launches and small conferences. Initially the Pavilion's main auditorium was not called a theater, but a Concert Hall, and within a few years it became apparent that its shortcomings in presenting staged productions were insuperable. As a result, in 1933 the stage was enlarged, both in depth and height, and it was reopened as a theater in July 1934. Numerous further alterations have been undertaken since, including the addition of two stores to either side of the main entrance in the early 1950's, and the replacement of the large fountain in the forecourt by a smaller one in 1968. In 1998 the building was listed Grade II and its future has therefore been protected.
Image Courtesy of Flickr and focalpunkt.
Sight description based on Wikipedia.
3

Westover Gallery is a gallery where you can see the best contemporary art of international and regional artists. You will see the temporary exhibitions of only renowned artists, as well as works of artists that exhibited their arts throughout the world. There are exhibitions of extraordinary talents such as John Wilson, Simon Claridge, Mark Spain and others.
Image Courtesy of Westover Gallery.
4

The Bournemouth International Centre (BIC) in Bournemouth, Dorset, is one of the primary venues for conferences, exhibitions, entertainment and events in southern England. Additionally, it is well-known for hosting national conferences of major British political parties and trade unions. The venue's Windsor Hall has a concert capacity of 6,500 and is one of the bigger indoor music venues in the UK, often included on the arena tours of major artists. The smaller Solent Hall can house exhibitions or hold up to 2,000 people for standing music concerts. The Solent Hall replaced the BIC's well-known swimming pool and wave machine in 2004. Owned and managed by Bournemouth Borough Council, the BIC is operated alongside its sister venue, The Pavilion Theatre and Ballroom.
Image Courtesy of Flickr and Matt From London.
Sight description based on Wikipedia.
5

Bournemouth Library is a large, modern library. The building represents contemporary architecture with a glass facade. Despite the usual books, there are also musical books, cds, a computer hall and a room where you can watch films. There is a piano and visitors can play it with headphones.
Image Courtesy of Wikimedia and Chris Downer.