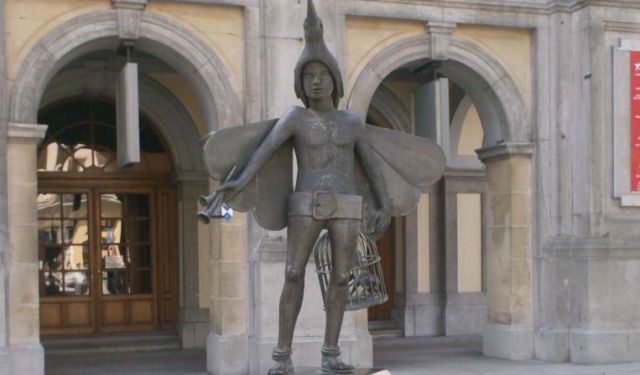 Image by Zeisterre on Wikimedia under Creative Commons License.

The medieval city of Brugge is home to many amazing cultural venues. In 2002, Brugge was honored with the title of European Capital of Culture. It boasts of its grand Royal Theater and of the Concertgebouw, where one can hear contemporary music or watch ballet performances. It is a city of possibilities where artists can show the world what they are made of.
How it works: Download the app "GPSmyCity: Walks in 1K+ Cities" from iTunes App Store or Google Play to your mobile phone or tablet. The app turns your mobile device into a personal tour guide and its built-in GPS navigation functions guide you from one tour stop to next. The app works offline, so no data plan is needed when traveling abroad.

1) The English Theater of Brugge

This theater in Bruges shows different English language theatrical productions all year round. It is housed in an old building with modern facilities.

The English theater of Bruges was inaugurated on the 1st of May 2007. The purpose was to promote the English language through drama performances in the city. The venue is an old cinema theater located in de Kuipersstraat. The first production screened here was the play, ‘Caviar & Chips’. The theater closed within six months and opened again in 2009. Today, a variety of theatrical productions are staged and many British actors come to perform here after the play is staged in the UK.

The English Theater is open all days of the week except on Mondays. Comedies, classics, musicals, cabaret, physical theater and devised plays are staged offering a wide variety of performances all year round. The interiors are modern and comfortable and the old world cinema environment is kept intact. A log fire is lit during winter to add to the quaint ambience. A daily 40 minute one man comedy show called, ‘Bruges Abridged’, about the city of Bruges is popular with international visitors. All shows are professional and of a high quality and the theater has had many well known theater directors.

The Concertgebouw is a major performing arts center in Bruges. It was built when the city was selected as the European Capital of Culture along with Salamanca in Spain, by the European Union, in 2002.

A competition for the design of a large performing arts venue was launched by the city and the building plan by architects, Paul Robbrecht and Hilde Daem from Ghent was selected. The design was chosen because of its excellent acoustics, aesthetic beauty and functional practicality. The Concertgebouw was constructed between the years 2000 and 2002 and inaugurated in the presence of the King and Queen of Belgium on February the 20th 2002. Funds for building the structure was provided by the City of Bruges, the Flemish community and the Province of Flanders.

The Concertgebouw is a modern performing arts facility in Bruges. Music, music, theater, classical and contemporary dance performances are held here. Local composers and choreographers are promoted by the organization. The building has a concert hall that can seat over a thousand people and a smaller chamber music hall with 320 seats. Most of the rooms offer a spectacular view of the City Center of Bruges. Besides their own productions, halls can be rented for music and dance performances and for conferences, art shows and other events.

Cinema Lumière is a place where you can spend some quality time with family and friends. The cinema is an art house where most of the films are foreign and screened in their original languages. Within the Cinema, there are three separate theaters, each of which provides ideal sound and projection. Every year, the cinema hosts festivals, such as the Cinema Novo Film Festival. If you are lucky, you may be in the city when one of these festivals takes place.
Image by Cinema Lumière under Creative Commons License.
4

Theaters play an important role in the cultural life of a city, and Brugge is no exception. With only 224 seats, Biekorf is the city's smallest theater. Its program includes smaller and more experimental productions -- theater, music theater, dance, concerts, and readings. It is located in the Biekorf Complex, which is also the site of the public library and the Cultural Center, which makes it a cultural package mini-tour.
Image by dmealiffe on Flickr under Creative Commons License.
5

The Royal City Theater in Bruges is regarded as one of the best preserved play houses in Europe. Contemporary dance and theater performances and music concerts take place here all year round.

The Royal City Theater was founded in 1864. A competition was launched by the city authorities for a suitable building design. The design of Brussels architect, Gustave Saintenoy was chosen. His design was inspired by the Opera House building in Paris designed by Charles Garnier. It was recently restored to its former glory when Bruges was declared the Cultural Capital of Europe by the European Union along with Salamanca in Spain in 2002.

The Royal City Theater has an elegant yet austere neo-renaissance façade. The balconies are flanked by Corinthian columns to resemble a Roman palace. The attic of the façade shows the coat of arms of the City of Bruges. The interior consists of an ornate foyer in eclectic architectural style and a magnificent auditorium. It is the home of the Bruges Cultural Center. The organization holds regular performances of modern dance, contemporary theatricals and jazz music concerts at the theater. Many well known international stars have performed here including Joan Baez in 2009. The theater hosted the 17th European Concert in 2011. The building looks magnificent when illuminated at night.
Image by LimoWreck on Wikimedia under Creative Commons License.
6

The Art Center De Werf is located on the Werfstraat. De Werf is known for its specially organized jazz concerts. It mainly concentrates on young talents and helps them promote their art. It is home to the Brugge Jazz Festival and it also holds theater performances. There is a CD shop on the site where one can buy quality music.
Image by tnarik on Flickr under Creative Commons License.

The historic city of Brugge has splendid museums and galleries for everyone to see and admire. Both medieval and contemporary art can be seen here, in the "Venice of the North." It’s amazing how this medieval city has guarded such incontestably valuable treasures, which are on the must-see list of every visitor to Brugge.

The famous medieval city of Brugge preserves many amazing landmarks within its walls. The grain mills will show you how flour was made, and the statues located around the city will reveal the lives of the important personalities of medieval Brugge. Take your camera and a look at the most fascinating attractions Brugge can offer.

Museums and Galleries Tour I

Brugge is the capital of West Flanders, Belgium. It is an egg-shaped historic city with an impressive collection of museums and galleries that tell the history of the city from different points of view and also reveal the contemporary side of the city. Take this tour to lose yourself in the medieval atmosphere of Brugge.

The Land of Beer, where each corner calls to you alluringly, welcomes visitors from all over the world. In Brugge, you will be amazed to find bars that offer a range of 300 beers along with a pleasant atmosphere and a guarantee of a wonderful time. There are many beer bars in the center of Brugge. Gather your friends and visit the best bars in the city.