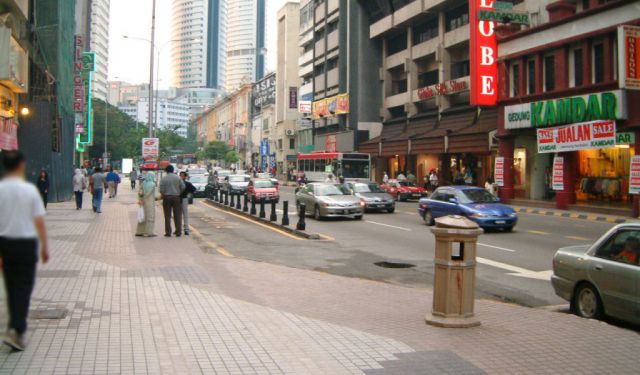 Image by Calvin Teo on Wikimedia under Creative Commons License.

If you want to broaden your perception of daily life in Malaysia then there is nothing better than to take the tour below. It will take you through places that are frequented by the locals and will help you appreciate the rhythm and the substance of the daily life of the city.
How it works: Download the app "GPSmyCity: Walks in 1K+ Cities" from iTunes App Store or Google Play to your mobile phone or tablet. The app turns your mobile device into a personal tour guide and its built-in GPS navigation functions guide you from one tour stop to next. The app works offline, so no data plan is needed when traveling abroad.

Kuala Lumpur is a rich blend of culture, heritage and modernization where each building and structure has a fascinating past and a story for everyone to hear. Such is the case with the striking Masjid Negara, which non-Muslims are welcome to visit outside of prayer time.

Engulfed in the serenity of nature stands the country’s symbol of independence and freedom from the British Empire. The Masjid Negara or the National Masjid of Malaysia is one of the most prominent buildings in the skyline of Kuala Lumpur. Covering a massive area of over 13 acres, this post-independence structure has the capacity of seating almost 15,000 people, thus, making it one of the largest mosques in South East Asia.

The Mosque was one of the first few structures that were built post the Malay independence and was meant to honor the Malaysian freedom from the British rule. It was built on the sight of a previously erected Gospel Hall which was later seized by the Malay Government.

The Masjid Negara was completed in 1965 by a team of three talented architects: UK-based architect Howard Ashley, and Malaysian origin, Hisham Albakri and Baharuddin Kassim. Although the structure was religious in origin, the design and style of the building were intelligently ahead of its time. One of the most striking features of the Masjid is the umbrella roof which according to some, symbolizes protection and shelter while architecturally is a clever solution to achieving a greater coverage over a large area.

Why You Should Visit:
This strikingly modern construction manages to prove that architectural beauty can be achieved despite using mostly concrete and a 'flat' design.
The elegance of the mosque is in its towering white minaret, the use of water and the wonderful geometric patterning of its outer courtyards.

Tip:
Be sure to go to the visitors' entrance if you aren't there to pray. There are robes for visitors to borrow free of charge if they don't meet the dress code.
There also are benches to wait on outside the entrance if you arrive early, and helpfully, free WiFi too (and a little shop for refreshments).
You're welcome to roam the grounds for as long as you wish, except in the main prayer room.
Great to combine a visit with the Islamic Arts Museum just around the corner.


Image by Graeme Maclean on Flickr under Creative Commons License.
2

There's hardly any other railway station in the world as grand and spectacular as the one on Jalan Sultan Hishamuddin Road in Kuala Lumpur. With an immaculate exterior and bold Indo-Mughal pillars and arches, the railway station can be easily mistaken for a palace in the city. A must visit on your architectural tour of the Malaysian capital; this railway station is one of those structures that make architectural landscape of Kuala Lumpur not only unique but also unforgettable.

Built in 1910, the present structure took place of the preceding railway station, known as the Resident Station, which stood on the same site. Designed by Arthur Benison Hubback, the architect who has many renowned buildings to his credit, the design of this magnificent structure came into being only courtesy of inspiration from the Anglo-Asian architecture. Having spent many years in India, Hubback architected many buildings throughout the country after which he moved to Malaysia.

A total sum of around RM 23,000 was expended on construction of this masterpiece of a terminus. The Indo-Saracenic connection is evidently seen in many structural monuments in the city and the railway station is one of them. Although the exterior of the station has remained unchanged, the interiors have been redone several times.
Image by Two hundred percent on Wikimedia under Creative Commons License.
3

Kuala Lumpur in itself is a culmination of brewing together different cultures and people. The resultant of this rich blend of ideas, philosophies and heritage coming from different cultures and parts of the world is what makes it a fascinating place to visit and a tourist’s paradise. Another effect of cosmopolitan culture can be seen in the architecture and heritage of the city. One such example is the Sri Mahamariamman Temple.

Built in 1873, this enchanting temple is the oldest functioning Hindu Temple in Malaysia. Founded by K. Thamboosamy Pillai, a pre-independence Tamil settler and one of the most prominent figures in the Tamil community in the country, the Temple was initially used exclusively by the Pillai family. It was not until the 1920s that they opened the doors so that it could become a place of worship for many immigrants from countries like India.

One of the most striking features of the Sri Mahamariamman is its dramatic tower filled with intricate sculptures of the various Hindu deities – a whopping 228 idols. Known as the ‘gopuram’, the tower is dedicated to the deity Mariamman, protector of all those in distant lands to preserve them from the evils of the world. This temple is especially relevant because the procession at Thaipusam (Hindu festival) during the month of February starts from here.

Tip:
Entry is free, but ladies need to cover properly and shoes must be removed and stored on the side for a small tip (bring wet wipes for your feet to avoid getting socks dirty).
Friday afternoon prayer time is an exciting experience; watching the ritual, and all the music to go with it.

One of the most fascinating temples in Kuala Lumpur is the Sze Ya Temple. Located in China Town, this Taoist Temple is one of the city’s heritage sites. Cramped in the narrowest streets, the positioning and design of the Temple is in accordance to Feng Shui, giving the entire setup a bizarre architecture which is both admired and questioned.

The Sze Ya Temple is one of the few structures that commemorate one of the founding fathers of Kuala Lumpur. Built by Kapitan Yap Ah Loy in 1864, the building hasn’t changed much from the day it was constructed. With elaborate roof ridges, and ornate interiors, the temple is a reflection of the old Chinese style of architecture. The Temple pays tribute to the deity Sin Sze Ya and Si Sze Ya, who are considered as the guardians of the immigrant Chinese miners.

It is believed that the entire burden of constructing this beautiful church was taken over by Loy and to honor that, a statue of the Kapitan still stands to the left of the main altar.

Having witnessed most of the city’s history, the Sze Ya Temple is one of the oldest Taoist Temples in the Kuala Lumpur.
Image by jenniferphoon on Flickr under Creative Commons License.
5

Founded in 1888, by the British, the Central Market is one of the best places to visit in Kuala Lumpur. Not only is it one of the prime locations to shop in the city, it is also the best place to enjoy the fruits of a multi-cultural and multi-ethnic environment. Because Kuala Lumpur has a rich blend of diverse cultures and people hailing from different parts of the globe, each have their unique set of handicrafts along with a unique blend that is very Malaysian. The market is one of the most visited sights in the city and quite a popular destination for buying souvenirs and mementoes from your vacation.

With the addition of the cemented structure in 1937, the market got the status of a Heritage site. With constant renovations and refurbishment, the market soon had distinct stalls and zones for different races to display and promote their items. In the earlier days the Central market was nick named the “wet market” because the floors were constantly wet. The market was visited mainly by tin miners of the region and sold meat, vegetables and the catch of the day! The market is easily accessible and conveniently located close to multiple public transport facilities.
Image by Two hundred percent on Wikimedia under Creative Commons License.
6

Koon Kee is located in Petaling Street. It is a small restaurant where people, who come to eat here, share tables with other people. The restaurant is famous among locals for the Wan Tan Mee which they serve. The noodles, here, have a different consistency and taste.
Image by Sallicio on Wikimedia under Creative Commons License.
7

Located on Jalan Hang Jebat, the Chin Woo Stadium is a very old and popular venue in Kuala Lumpur. There, locals go to play badminton, basketball or to swim in the stadium’s pool. It provides facilities and is witness to quality competitions between local sport teams. It also hosts badminton tournaments. People can hire the basketball and badminton courts. The stadium is open from 10am to 12.30pm and from 3pm to 9pm.
Image by Azreey on Wikimedia under Creative Commons License.
8

Chen Academy, as well as many other academies of Kuala Lumpur, provide education for thousands of young Malaysian people, who are determined and eager to learn. The traditional educational system has been quite efficient in encouraging the student's psychological and academic growth.
Image by Phantomclf on Wikimedia under Creative Commons License.

The finest thing about Kuala Lumpur is that it has preserved a balance between exhilarating urban architecture and its natural environment. Indeed, there is an abundance of greenery in Kuala Lumpur. Lake Gardens, known officially as Perdana Botanical Gardens, is Kuala Lumpur's first large-scale recreational park. It contains large manicured gardens and a host of attractions. Take this walk to...  view more

Museums and Galleries in Kuala Lumpur

Kuala Lumpur is a city with a lot of famous shopping centers and street markets. For those with a moderate shopping budget, Petaling Street or Bukit Bintang is the right place to go to. KLCC is an upmarket shopping spot, famous for the Petronas Twin Towers. This is an exciting shopping center of Kuala Lumpur. Check out the top shopping places that you might like to visit on the tour below.

Kuala Lumpur is the capital and the largest city in Malaysia, and also its cultural and economic center. The city represents a mix of different architectural styles making it both interesting and beautiful. Kuala Lumpur has created a range of extraordinary and exclusive attractions that combine Eastern and Western elements and also showcase local handicrafts. Chief among these are Sultan Abdul...  view more