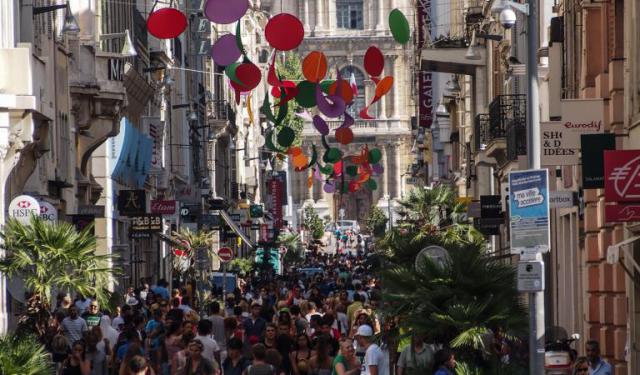 Image by Fr.Latreille on Wikimedia under Creative Commons License.

When you take this route, you'll have the opportunity to visit spots of locals' everyday life and get a glimpse of what it is like to live in Marseille. Come early at the harbor to see fishermen departing into the sea, do some shopping at a local market, enjoy a cup of coffee in the café around the corner. You will have a lot of fun on this tour.
How it works: Download the app "GPSmyCity: Walks in 1K+ Cities" from iTunes App Store or Google Play to your mobile phone or tablet. The app turns your mobile device into a personal tour guide and its built-in GPS navigation functions guide you from one tour stop to next. The app works offline, so no data plan is needed when traveling abroad.

1) University of the Mediterranean

Image by Ed Yourdon on Flickr under Creative Commons License.
Sight description based on wikipedia
2

The Église Saint-Cannat is a Roman Catholic church in Marseille, located in the 1st arrondissement of Marseille. This local church was founded by the Dominicans in the 16th century and it stands today in the very center of the city. The main architectural design of the building is late Baroque. Take a peek inside to admire the richly decorated interior. The church has a few works of art. Two paintings by Michel Serre (1658-1733) are displayed in the church: La vierge à l’enfant et le purgatoire and La purification de la Vierge. There is also a painting by Pierre Parrocel (1664–1739), representing the baptism of Christ. Additionally, one can see a sculpture of Saint Thérèse of Lisieux (1873–1897) designed by François Carli (1872-1957). The pipe organ, designed by Jean-Esprit Isnard (1707-1781), dates back to 1747.

Image by Robert Valette on Wikimedia under Creative Commons License.
Sight description based on wikipedia
3

Capture the essence of Marseille at the early morning fish market that opens here daily. Fishermen’s wives sell high-quality fresh fish in the Vieux-Port. It is all weighed, gutted and scaled on the spot. This market reflects the spirit of Provence. It is the right place to come for a true cultural experience.
Opening hours: 8 am - 1:30 pm.
Image by maarjaara on Flickr under Creative Commons License.
4

Place aux Huiles is famous for its great assortment of olive oils. You can see, taste and buy many different kinds of olive oil with or without special herbs and other plants or flowers. You can taste the different oils on a piece of bread and when you have made your choice the oil is bottled for you.
Image by BAIA on Wikimedia under Creative Commons License.
Sight description based on wikipedia
5

Marché Puget Estrangin is a lively food market situated on the Cours Pierre Puget. On Mondays, Wednesdays and Fridays the place also serves as a fairground. And a colorful flower market is held here every Monday as well.
Image by tonylanciabeta on Flickr under Creative Commons License.
6

Cafés Debout is located behind the Opéra house. It may be small in size, but it offers good quality products. It's a real pleasure to come and taste a cup of tea or coffee of your choice, while nibbling a square of rich dark chocolate. The walls are decorated with souvenirs and shelf upon shelf of ornate coffee pots. You'll enjoy both the food and the design of the place.
Image by naama on Flickr under Creative Commons License.
7

O'Stop is located in an area of Marseille known for its "American" flavor. It is the best place for those who've been busy painting Marseille red all night. O'Stop takes full advantage of its antiquated round-the-clock permit. The café seats no more than 12 people. Expect to meet an eclectic mix of cops, crew of the opera and teenagers with red eyes, all engrossed in their fish, meat and poultry plats.
Image by prakhar on Flickr under Creative Commons License.
8