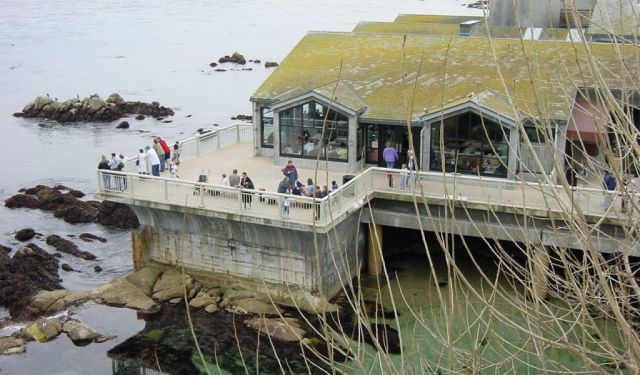 Image by jimg944 on Flickr under Creative Commons License.

Most of us seek extraordinary, wonderful and unusual places and things and traditions in the countries we visit. Of course, everything new is exciting and that satisfies our thirst for adventure. On the other hand, when we get tired of all the new things we have seen, there comes a time when you want to experience the real life, the daily life of the people who built and created the country. This guide will lead you to the common, usual, daily life places in Monterey.
How it works: Download the app "GPSmyCity: Walks in 1K+ Cities" from iTunes App Store or Google Play to your mobile phone or tablet. The app turns your mobile device into a personal tour guide and its built-in GPS navigation functions guide you from one tour stop to next. The app works offline, so no data plan is needed when traveling abroad.

The building of St John's Chapel was started on June 14, 1891. It was officially opened in 1894 by Bishop Nicols of the Diocese of California.

In 1957, the road next to the chapel had to be removed. Since the move in 1957, the chapel has continued to serve the people of Monterey, preserving the integrity of traditional worship. Every Sunday locals gather here for communion. All the neighborhood weddings take place here, so you might get to see a happy Monterey couple!

The Naval Postgraduate School (NPS) is an accredited research university operated by the United States Navy. The school grants master's degrees, engineer's degrees and doctoral degrees. It also offers research fellowship opportunities at the postdoctoral level through the National Research Council research associateship program. The NPS student population is mostly active-duty officers from all branches of the U.S. Military, although U.S. Government civilians and members of foreign militaries can also matriculate under a variety of programs. Most of the faculty are civilians. NPS offers graduate programs through four graduate schools and 12 departments. On 9 June 1909, Secretary of the Navy George von L. Meyer signed General Order No. 27, establishing a school of marine engineering at Annapolis, Maryland.

On 31 October 1912, Meyer signed Navy General Order No. 233, which renamed the school the Postgraduate Department of the United States Naval Academy. During World War II, Fleet Admiral Ernest King, chief of naval operations and commander-in-chief of both the Atlantic and Pacific fleets, established a commission to review the role of graduate education in the Navy. In 1945, Congress passed legislation to make the school a fully accredited, degree-granting graduate institution. Two years later, Congress adopted legislation authorizing the purchase of an independent campus for the school. A post-war review team, which had examined 25 sites nationwide, had recommended the old Hotel Del Monte in Monterey as a new home for the Postgraduate School. In December 1951, the Postgraduate School moved across the nation, establishing its current campus in Monterey.

Image by Beverly & Pack on Flickr under Creative Commons License.
Sight description based on wikipedia
3

Children want candies and ice-cream, teenagers look for chips and cola, grownups seek...everything for the house! Valnizza Market & Liquor is a local supermarket, that has been serving Monterey downtown neighborhoods for many years. Anytime you'll be able to see a granny with her lovable grandchildren, parents and young people in love searching for food and beverages.

Originally this cemetery was established in 1834. It was called San Carlos Borromeo de Carmelo. It comprises 13.5 acres and is located in central Monterey. This is the central cemetery, but not the only one. Lately, a lot of outdoor crypts have been built, making the scene nicer, filled up the open spaces with some nice architecture. It is obvious that this is not a fun place to be, but it is a place of everyday life, a quiet place, where locals come to commemorate their relatives and friends.
Image by Didier B on Wikimedia under Creative Commons License.
5

Esteban is a local hot spot for Monterey City youth in the evenings. It is a popular disco-bar visited mostly by local young people. The style of the interiors is Spanish, the music played here is hip-hop and pop. Twice a week they have a salsa and Spanish dance night. Sometimes they organize karaoke nights. During the day Esteban is an authentic Spanish food restaurant.
Image by avlxyz on Flickr under Creative Commons License.
6

Hunting for something specific to Monterey? This park will give you a ringside view into the real emotions, faces and eyes of Monterey people. This park has six tennis courts and a huge baseball field! It has seats and parking places so that visitors can enjoy some great games. Everyday children and students come here to practice, but on Sundays and holidays the big show is on. It is a modern park, very clean and very crowded with locals.
Image by alq666 on Flickr under Creative Commons License.
7

After a whole day filled with events, after long walks around Monterey, tired and hungry, we offer you the best thing to do for an evening - rest on the beach. The sand is great in Monterey city, and the ocean is calm and warm in the evenings. Local fast-food, small bars and tiny gift boutiques are placed at the gates. Locals come here for an evening walk, a little beach picnic, some sports and games and family reunions. Among them you will no longer be a visitor, but a real Monterey resident!
Image by Tim Pearce, Los Gatos on Flickr under Creative Commons License.

Usually, when we visit a city, we all flock to its unusual features, buildings, super malls and discos, gift shops and so on. But few of us understand the true meaning of a museum. Art or history, biology or army - all these theme based museums tell us a lot more about the character of the inhabitants, about their hobbies, or, about that particular country's traditions, rules and delights....  view more

Religious buildings all around the world are unique in a way. Catholic, protestant and orthodox churches or Muslim mosques - each place of worship has an individual facade, construction type and interiors. A church can say a lot about the history of the country or the city you visit. Of course, the church visitors will be glad to tell you more about the location. This guide will lead you to the...  view more

The time spent with your loved ones - husband, wife, your children - is the most important and beautiful time spent ever. But it takes strength and intelligence to turn it into a real pleasure. In order to make your journey better, easier and more memorable we have created this guide for the city of Monterey. Have a great vacation with your family!

Once (between 1777 and 1849) the capital of California, in recent history Monterey gained fame mostly as the set of John Steinbeck's novels, particularly Cannery Row, a one-time center of the city's sardine-packing industry, which the author immortalized in his eponymous book. Today, the area is a popular thoroughfare filled with gift shops, seafood restaurants and bars occupying the...  view more