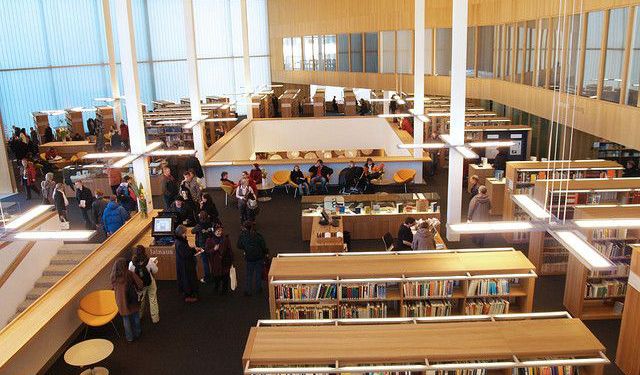 Image by Andrei! on Flickr under Creative Commons License.

As the oldest city in Finland, Turku is a fantastic tourist destination with a number of glorious attractions, museums, galleries and other fascinating things to see and do. However, there are plenty of hidden local places that can tell their own story about this charming city. The following tour will help you discover Turku’s vibrant daily life spots.
How it works: Download the app "GPSmyCity: Walks in 1K+ Cities" from iTunes App Store or Google Play to your mobile phone or tablet. The app turns your mobile device into a personal tour guide and its built-in GPS navigation functions guide you from one tour stop to next. The app works offline, so no data plan is needed when traveling abroad.

Image by LPfi on Wikimedia under Creative Commons License.
Sight description based on wikipedia
2

Panimoravintola Koulu is a Finnish brewery restaurant in the city of Turku. Koulu (School) is the largest brewery restaurant in Finland and it is situated in a former Neo-Renaissance-style school building from 1889 by architects L. I. Lindqvist and Bruno Granholm. The school to first occupy the building was "Svenska Fruntimmerskola", which was later renamed as the "Svenska flickskolan i Åbo" in 1916, again in 1955 when it became "Åbo svenska flicklyseum", until finally in 1966 the name was changed to "Cygnaeus skola". On 4 of February 1940 the school was hit by a incendiary bomb, which set fire to the roof and destroyed the assembly hall (now known as the Bellman assembly hall). One of the high points in the history of Koulu was the visit of Commander-in-Chief, Baron Carl Gustaf Emil Mannerheim on 14 February in 1941.

The brewery has four regularly produced beers and one cider. On top of which, the brewery also produces several (at least 12) special or seasonal brews throughout the year. All the beers are made under the regulations of the German purity law, the Reinheitsgebot from 1516. It allows only the use of water, malted barley, hops and yeast.

Image by Tero Heino on Flickr under Creative Commons License.
Sight description based on wikipedia
3

Conveniently located in the city centre's historical surroundings, Café Fontana is hugely popular among both locals and tourists. This lovely café offers its visitors delicious, in-house baked goods such as cinnamon rolls, cakes, pies, muffins and croissants, which are served with freshly ground coffee sauce. The menu also includes fresh salads, tasty pastas and other yummy dishes. Café Fontana is a great place in which to have lunch on the terrace and experience the busy city life.
Image by blind_donkey on Flickr under Creative Commons License.
4

Linnankatu is one of Turku’s busiest streets with beautiful historical and modern buildings. Lovely cafes and restaurants, fashionable stores, souvenirs and gift shops can be found on this charming street. Walking on Linnankatu Street will allow tourists to see and feel the lively and colourful daily life in the city.
Image by Kalajoki on Wikimedia under Creative Commons License.
5

Turku Main Library is the chief branch of Turku City Library. The library is approximately 8,500 m².

Five works of art were acquired for the library: Saara Ekström's ornamental Alkukirjain (Initial Letter) spreads out on the walls of the main hall, and her video work Aakkoset (the Alphabet) can be seen at the Reading Corner of the hall. The sculpture Visual Vortex- Passge of Events by Hans-Christian Berg is situated in the showcase by the main entrance. Vestigia by Hilkka Könönen is situated at the News Square. Hetkinen (Moment) by Ann Sundholm shines its light on the main hall. Merja Pitkänen has realised sculpture installation Esiintymä (Occurrence) at the library cafe Sirius. These pieces are a part of the Wäinö Aaltonen Museum of Art collection for the City of Turku.

Settled on the east side of the Aura River, in Turku's central region of II District, Vartivuori park is a great place to spend a quiet afternoon and witness some of city's daily activities such as locals walking through the small park road, sitting on a bench and reading newspapers or parents playing with their kids on pretty green fields. The famous Vartiovuori Observatory is located on the hill of this attractive park.
Image by Samuli Lintula on Wikimedia under Creative Commons License.
7

The modern University of Turku was founded in 1920. The Finnish intelligentsia wanted a purely Finnish university, the first of its kind in Finland. 22,040 people contributed to the fund-raising campaign. Newly gained independence and the campaign are reflected in the motto of the University about a free people's gift to free science. To honour the memory of these donors, the University has named its specially created liqueur "22 040".

The first premises of the University of Turku were in the centre of the city, by the market square. In the 1950s a new campus was built on Ryssänmäki (Russian Hill – now known as University Hill).

The University was made a public institution in 1974.

Since 1995 the University of Turku has been a member of Coimbra Group.

In January 2010, Turku School of Economics merged with the University of Turku, forming a seventh faculty of the university.