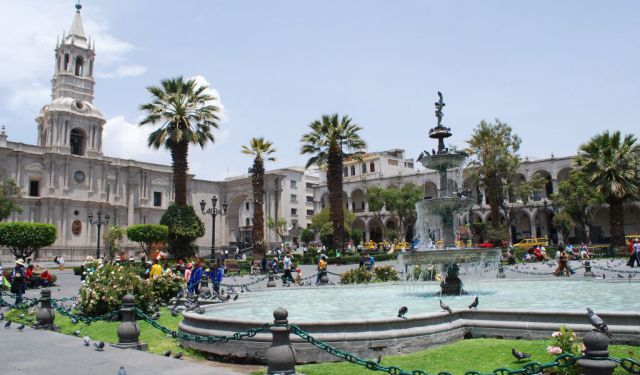 Image by Ivan Mlinaric on Wikimedia under Creative Commons License.

Arequipa is a vibrant city with streets full of life. The city's rich colonial past and colorful traditions make for a fun, exciting visit. The following walking tour will take you to Arequipa’s most popular local spots.
How it works: Download the app "GPSmyCity: Walks in 1K+ Cities" from iTunes App Store or Google Play to your mobile phone or tablet. The app turns your mobile device into a personal tour guide and its built-in GPS navigation functions guide you from one tour stop to next. The app works offline, so no data plan is needed when traveling abroad.

Situated in the city center just few minutes away from the main square, San Camillo is Arequipa’s oldest market. Locals prefer to buy food here rather than going to the supermarket. This covered market sells a variety of fruits, vegetables, prepared local foods, flowers and some artwork and crafts. Visit San Camillo Market and experience an authentic slice of Peruvian daily life.
Image by Steve Burt on Flickr under Creative Commons License.
2

Parque Duhamel is a beautiful green park located about a five minute walk from Plaza de Armas. The park contains stunning flowers and has benches for those who want to relax and enjoy the view. Locals often gather here for lunch or to take a daily walk. Here you can see parents having fun with their kids, we well as students, shoppers and workers taking a break from their regular activities.
Image by Koba-chan on Wikimedia under Creative Commons License.
3

Many Latin America cities have a central square called Plaza de Armas. The Grand Square of Plaza de Armas is a focal point for Arequipa residents' daily activities. Graceful colonnades, tall palm trees, beautiful flowers and historic buildings all add to the elegant grandeur of the city’s busiest plaza. Here you can observe the hectic hustle and bustle as students, city workers, shoppers and tourists mix.
Image by Phillie Casablanca on Flickr under Creative Commons License.
4

The Pasaje Catedral is an elegant pedestrian alley situated behind the Basilica de Arequipa. Numerous shops and restaurants line the alley, while the charming historic buildings constructed from Arequipa white ashlar stone make this a perfect spot for a daily walk.
Image by Rachel Cheek on Flickr under Creative Commons License.
5

National University of St Augustin of Arequipa, known locally as Universidad Nacional de San Agustín de Arequipa is a state-owned university. It is the oldest local state university in Arequipa, and has been in continuous operation since its founding on November 11, 1828.

The university is currently in a process of reform, due to the massive and generalized scandals of corruption involving both authorities and teachers. Strikes are not uncommon, both by teachers and by students. Arequipa's principal stadium — one of the largest in Peru, Estadio de la UNSA — was built and directed by this university.

Image by betoscopio on Flickr under Creative Commons License.
Sight description based on wikipedia
6

Calle San Fransisco is a must-visit street in Ariquipa known for its dynamic and vibrant atmosphere. This busy street is full of restaurants, shops and nightclubs, most of which are located in beautiful colonial buildings.
Image by AgainErick on Wikimedia under Creative Commons License.
7

Located in an old colonial house, Ary Quepay is a popular rustic restaurant with an extensive menu that features traditional Peruvian delights. The owners, a friendly husband and wife, love to welcome both regular visitors and tourists. Be sure to try the traditional Arequipeno dinner of grilled guinea pig and peppers stuffed with vegetables. This local restaurant has a relaxing bamboo dining garden. Live folk music can be enjoyed here in the evenings.
Image by Letincelle on Flickr under Creative Commons License.