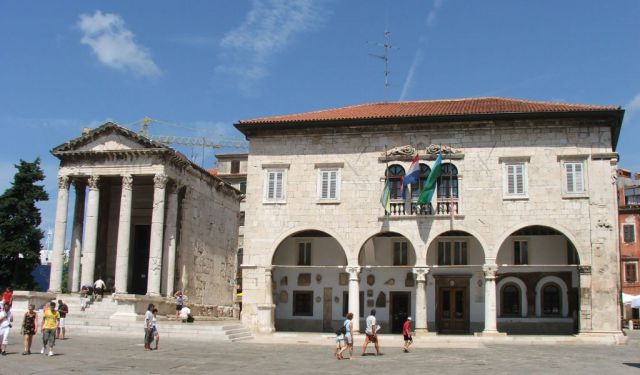 Image by ChrisV on Wikimedia under Creative Commons License.

Pula is a very attractive city and has many interesting historical and modern landmarks to visit and admire. The markets of Pula are especially worth a visit, due to their lively and colorful atmosphere. Barbara's Restaurant is a great place to take a break and try some traditional Croatian food. Take this tour to get a sense of life in the town of Pula.
How it works: Download the app "GPSmyCity: Walks in 1K+ Cities" from iTunes App Store or Google Play to your mobile phone or tablet. The app turns your mobile device into a personal tour guide and its built-in GPS navigation functions guide you from one tour stop to next. The app works offline, so no data plan is needed when traveling abroad.

The Marina Yachting Club is home to a number of yachts and catamarans of all shapes and sizes. The berths range up to 1,500 meters in length. The marina is located in a place where wind is not a great concern for boaters. The marina complex has several restaurants, shops and a sports area.
Image by Orlovic on Wikimedia under Creative Commons License.
2

Barbara's is a pleasant restaurant not far from the sea. It serves mainly traditional food, including a wide variety of seafood, which is a Pula specialty. Barbara's is especially known for its ćevapčići, or spiced meatballs, and also serves very tasty calamari, caught locally.
Image by Kawu on Wikimedia under Creative Commons License.
3

The Communal Palace is situated at the northern end of the main square of the old part of the City of Pula, called the Forum Square. The spot occupied by the Palace has been used for the public buildings since the Roman times, when the place was used as a part of the triade of Roman temples, of which today only Temple of Augustus remains. As the city prospered, there was a need to construct a dedicated place which would serve as a city hall, so the construction of the new city hall, at the site of the Temple of Diana, was begun in the end of 13th century, and the new city hall was finished in 1296.

Image by Ramón on Flickr under Creative Commons License.
Sight description based on wikipedia
4

The Cvajner Gallery is one of the most exquisite places in the city of Pula. The gallery was founded by Ms. Ostovic Cvajner and opened in 1998. It is a combination of art gallery and cafe, making it the perfect place to rest and have a good time. The gallery collection consists of numerous paintings and sculptures by both famous and emerging artists.
Image by Gezlarge on Flickr under Creative Commons License.
5

Cinema Valli is the only indoor cinema in Pula. It is not very large, but it has comfortable chairs and shows a good selection of American, European and even Croatian movies. The cinema was renovated not long ago. It has the capacity to seat 200. It is decorated simply and has a nice bar.
Image by wegavision on Flickr under Creative Commons License.
6

The Istrian National Theater, known also as the City Theater, is an important building in the city. The theater opened at its present location in 1881. The building was developed by Pietro Ruggero Berla Ciscutti. The Istrian National Theater has 800 seats and is used for festivals, cinema performances and opera. Since opening, it has undergone a series of renovations.
Image by bagaball on Flickr under Creative Commons License.
7

Giardini Square is located in the center of Pula. It has many trees and resembles a small park. It is the perfect meeting spot for locals, due to its location and pleasant view. There are also some terraces, so people who meet here can sit and admire the beautiful surroundings.
Image by skenmy on Flickr under Creative Commons License.
8

The Fish Market is one of the most popular markets in Pula. Here you can find all kinds of fish for sale, and the prices remain low due to fierce competition among the local vendors. All the fish sold in this market is fresh. In addition to fish, there are also crustaceans, shrimp and other seafood available here.
Image by ChrisYunker on Flickr under Creative Commons License.
9

The City Farmers' Market is the main market in Pula. Farmers from neighboring areas sell their goods here. Some of the products found here include local fruit and vegetables, a variety of olive oils, honey, spices and many other tasty items. You will find the lowest prices in the city at this market.
Image by ChrisYunker on Flickr under Creative Commons License.

Pula has a vibrant nightlife, and prices are lower her than in the surrounding cities. Because Pula is on the sea, there are a number of bars and discos you can visit to enjoy the beautiful view and refreshing sea breeze. Take this tour to check out Pula's best bars, nightclubs and discos.

Pula is a town with a rich culinary and cultural history. Visit the city's most popular markets to find everything from truffles and olive oil to honey and lavender. Scour the stores for beautiful hand-crafted souvenirs. Take this tour to visit the most notable markets and stores in Pula.

The historic city of Pula - renowned for its beaches and Roman ruins - enjoys strategic location in a secluded harbor on the Adriatic coast of Croatia’s Istrian Peninsula. In the course of centuries, Pula has survived numerous invasions – first by The Romans, then Venetians, and finally by the Allied Forces during World War II – all of which have left their mark on the face of the city. The...  view more

Veruda is a very beautiful area of Pula. It is rich in tourist attractions, but it is most popular for its white-sand beaches and bays. After you've enjoyed lounging at the beach, be sure to visit the Naval Park, the Naval Cemetery and the Church of Our Lady of the Sea. Take this tour to explore Pula's fascinating Veruda District.